Airstream aficionados and those who aspire to be Airstreamers, are influenced by the iconic aircraft-inspired shape, the rounded glass (yes, really!) windows on the corners and the idea of owning a towable leisure 'home' totally out there on its own. If you want to get into Airstreaming, it's all down to what it's worth to you. 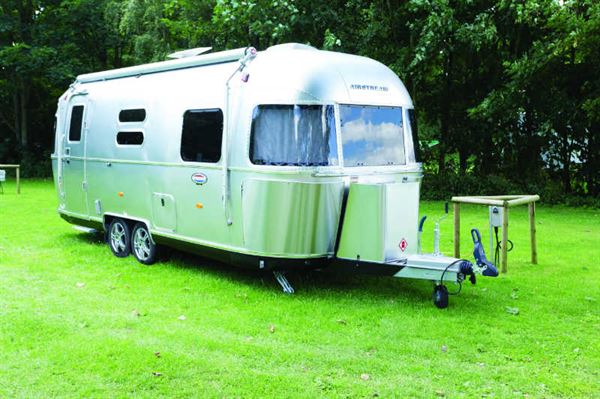 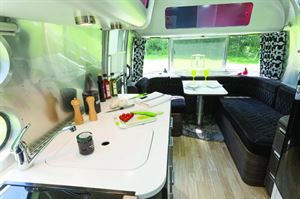 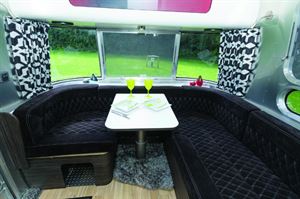 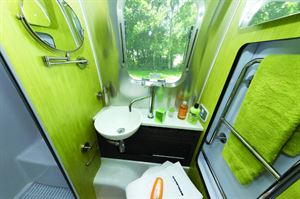 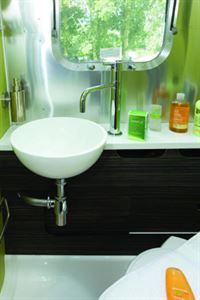 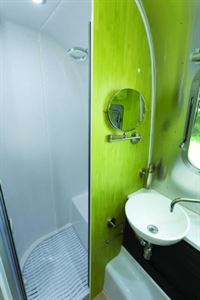 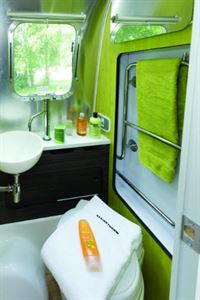 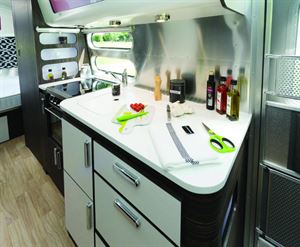 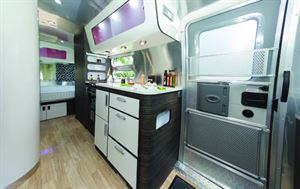 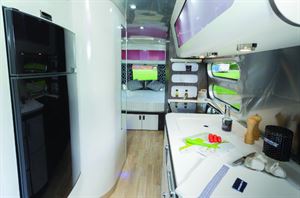 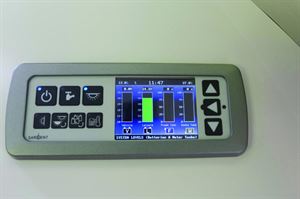 Convoys of shiny, aluminium caravans, all sleekly lozenge-shaped, towed down long, straight, dust-bowl roads in mid-America, their owners sharing one goal: adventure… It's a well-documented scene from the 1930s, when Airstreams first appeared in an embryonic leisure-time era. Airstreamers travelled in convoys because they sought to share the adventure together; a sort of rally, you might say.

Airstreams quickly gained a cult following, akin to the VW camper van. And, like the VW, it has endured. No other towed vehicle commands so much head-turning attention on a road as a silver, riveted Airstream.

The shape has changed little since those early days of American pioneering adventure. And Airstreams still have boxy gas bottle lockers that sit out, forward, away from the body line. The closer you investigate an Airstream, the more you realise this is caravanning, but not as we know it.

The door (on the offside) opens in a manner like an aircraft door; it's curved, along with the fuselage shape of the body. The door hangs on huge hinges and closes with a resounding chunk. Plus, it has two locks. And it has an inner section, of metal-framed mesh panels, to open separately for ventilation. The whole design is industrial and not at all refined. But that's the idea of an Airstream.

The chassis is made by BPW, with a Winterhoff hitch-head stabiliser; that's another difference between Airstreams and British-made caravans, all of which currently use AL-KO chassis.

Inside, the entire roof and walls are lined with brushed aluminium. The curved shape gives the impression you might be in a small aircraft. But there the similarity with anything airborne ends. For there are some caravan-like features here. The heating is Alde. The Yukon has Dometic's 190-litre fridge-freezer. There's a 45-litre inboard water tank; and there's a shower outside as well as inside.

By British wash room standards, the Yukon's wash room is small, with floor space measuring 87cm x 58cm. The shower compartment is a generous 88cm x 64cm when you include the ledge formed by the wheel arch. The washbasin is circular, 30 cm in diameter; small comparatively with most in British-built tourers. There is a ceramic-bowl toilet, in line with many of the UK's top-spec caravans.

And an Alde-heated towel rail in a recess on the forward wall. But the heavily tinted and fly mesh-covered window restricts daylight. We find ourselves see-sawing between praise (ceramic toilet) and criticism (size of compartment and insufficient daylight).

Throughout our analysis, though, we have to keep in mind that this is an Airstream, not a conventional caravan and, while caravan owners may compare this unit to high-end British-built tourers, there are many buyers of Airstreams who simply want an Airstream for what it is.

The Yukon is ostensibly a two-berth, with a double bed at the front, 1.87m long and 1.4m wide; there is space at the foot of the bed for tall people to overhang feet. The bedroom is nicely secluded by the shower room and by the wardrobe just forward of it. And, the mattress feels comfortable — firm yet cosily yielding.

You can make a single bed from the lounge furniture, by lowering the table on its chunky monopod leg and inserting a section of upholstery. The result is a bed that measures 1.97m long and 72cm wide.

The Yukon's biggest storage asset is its under-bed space, as you might expect. Its base rises on gas-filled struts to give a good aperture. There's an exterior hatch. The power distribution box is under here, but there is so much space it doesn't impinge on storage capacity. Upper storage in the bedroom and above the lounge are single, deep lockers running the full width of the Airstream. Like many aspects of this unit, styling here is unlike any caravan, with frosted sliding doors, a bold red lining and lighting within the lockers.

Again, incomparable with UK caravans, storage under the lounge is restricted to one area, albeit a useful one. It's a large shoe alcove, directly alongside the door. The space under the seating on the opposite side is largely taken up by the Alde heating unit, the water tank and necessitous plumbing and piping.

The wardrobe is nicely proportioned, with a shelf plus 64cm of hanging width, and the rail is ridged to ensure hangers don't jump off when towing; a nice touch. Again, it's a seesaw of facts from first-class wardrobe and excellent shoe alcove to restricted under-lounge space, hence only a C score for storage.

The 75cm x 56cm table scores a nice, fat B, though. Given the Yukon's primary function as a two-berth, that's fine.

Lounging is fine, too, in terms of seat comfort and top-class upholstery, in black suede-effect with fine white stitching in a diamond-shaped pattern. It's lovely to look at and lovely to sit on. One person can stretch out with feet up; the settee opposite the door is 1.64m long.

We think it merits another B, especially when we account for the awesomely modern styling. Airstream may have been invented in the 1930s and, externally, stayed largely unchanged, but the interior design is bang up to date, with the black upholstery contrasting in striking fashion with the metal walls and black and white curtains.

The kitchen is 1.7m long, with the three-burner hob on the fore end and a 16 cm-wide surface alongside it ideal for a kettle or toaster; a socket is close by. The main section of the white Corian surface is an impressively practical design; partly ridged to enable water draining off washed items to flow into the sink.

And what a sink! It's enormous; 35cm wide, 45cm long and 15cm deep — with a plug that incorporates a circular trap to prevent bits of food from entering the pipework.

Higher-level kitchen storage is in another of the red-lined, illuminated, frosted-door lockers that form part of the styling; it's 1.29m long. Three drawers, the top one containing a wooden cutlery tray, are 50cm wide.

Two cabinets, each 35cm wide, are alongside. The bottom one contains a plastic bin; how brilliant to find a caravan bin in the proper place, hidden inside a cupboard instead of stuck on the door that, in 99% of layouts, is in the lounge. You wouldn't put a rubbish bin in a lounge at home, so why do most caravan door manufacturers think you'd want one in your tourer's relaxing department?

So, first-rate storage and a first-rate bin — but how about the cooking appliances? The oven and grill are a combined unit, we think 's fine, but we also think that, in this price bracket, buyers will expect a full oven and grill. They'd also expect a microwave and that's not here, either.

But there is an extractor fan directly above the hob. Again, the praise/criticism see-saw swings… The lack of microwave and separate oven and grill pulls the mark down, but all the rest of the kitchen features, especially the ridged drainer surface, push it well up, hence a B.

Our 23-mile tow test route involved winding lanes, a couple of roundabouts and open straight stretches of road where getting up to 50mph was easy. Throughout, the Yukon behaved as stably as any twin-axle caravan, just as we had expected.

The calm weather of the day meant that, on the open road, we had no side winds to challenge stability. But we do wish the Yukon were equipped with iDC; BPW's automatic stability device which detects and then corrects the first sign of instability even before the driver is aware of it — not all towing is done in the perfect windless conditions we enjoyed; hence we've awarded another B.

Unladen and with no gas bottles on board, the Yukon's noseweight measured 78kg. That should give enough of a margin for two full 6kg propane bottles (each has a total weight of 16kg) plus some stuff under the bed.

Take care to measure the noseweight, though, as the under-bed area, at the front, is your main storage area so there is a risk of allowing the weight to creep up above your car's tow ball weight limit. On a hefty vehicle suitable for the Yukon, that would typically be 140kg (SsangYong Rexton W) to 160kg (Range Rover).

Airstream aficionados and those who aspire to be Airstreamers, are influenced by the iconic aircraft-inspired shape, the rounded glass (yes, really!) windows on the corners and the idea of owning a towable leisure 'home' totally out there on its own. They don't mind the heavy weight. Owners are unlikely to miss a microwave.

Owners will, though, appreciate the creature comforts — the Alde heating and the inboard water tank. And they'll adore the ultra-modern styling of brushed metal, white cabinetry and black upholstery. Value? At much more than twice the price of top-spec caravans, Airstreams really can't be compared to other caravans; in essence, if you want to get into Airstreaming, it's all down to what it's worth to you.

Stone Guard window protectors to protect the front windows during towing, at £1395.