The Adria Altea 4four Signature is a sensation. Adria has brought caravanning to a new level, designed to appeal to people who might otherwise not be tempted to consider caravanning. Suddenly caravans are colourfully cool. Any negatives? There is just one. The compact size of the 4four won’t suit every potential buyer. We hope this colourful concept will be rolled out to larger caravans in Adria’s ranges. Will UK manufacturers catch the colour trend? We’d like to think so. 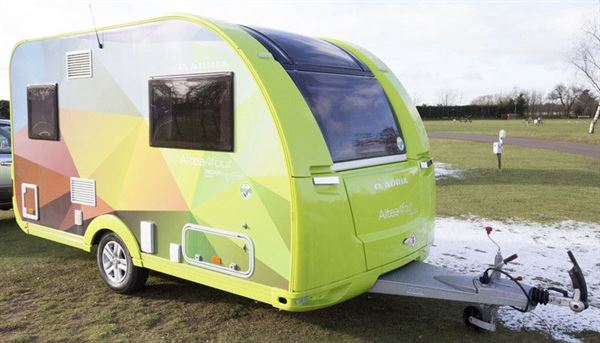 The Adria Altea 4four's psychedelic, zingy colours make it by a long way the coolest-looking caravan ever; destined, we believe, to prompt new people to consider caravanning.

We all know fabric colours can hugely influence caravan purchase decision. But how about the exterior? Apart from the occasional foray into metallic grey, caravans are largely white, leading inevitably to the often-heard expression that “caravans are white boxes”. Now, though, there’s a caravan made in Slovenia that breaks into a whole new world of colour.

Adria announced the special Signature edition of its Altea Forth for the 2015 model year. We’d seen one, briefly. And been utterly gobsmacked. Now, this awesome trend-setter was ours for several days, during which we’d have time to get to know the little caravan that bears most of the colours of the rainbow, plus the most vibrant lime green imaginable.

We’d been looking forward to its head-turning capacity and we weren’t disappointed. Its vibrant colours create the instant impression that this is a caravan that is destined to appeal to an energetic audience.

Incidentally, you do have the option of having your Signature in white. In which case it has its own unique name, the Signature Go White. Even though the name is nice, why would anyone opt for their Signature in white when they could have it in any number of head-turning vivid colours?

The Adria website invites you to create your own Altea4four. You have five colour options for the roof, front and rear panels. You have six side panel options. There are stripes, squares, spots, diamond shapes, and something that looks like floral wallpaper in grey (it’s nice, though!). Or you could go for the option called Kaleidoscope. That’s the option on our test Altea, teamed with the lime green.

So, exterior dazzlingly distinctive and utterly unique, what about the interior? That’s unique, too, but in a very different way. In just 3.64 metres of interior length the 4four can provide beds for up to four.

And there’s more. For £699 you can purchase an extra item that is on the options list of no other caravan except an Adria Astella. It’s a Bose sound system, with the type of neat black speakers that are also sold for use in houses.

The speakers are in the front corners, and have the effect of enveloping the caravan in a rounded, quality sound. The sub-woofer is hidden away under the nearside seating unit.)This is the perfect extra for buyers who regard music as an essential part of their leisure time.

Every aspect of this caravan exudes clever design. The washbasin is part of the mirrored cabinet above. It’s disguised; the only evidence of its presence is a recess large enough to insert your fingers to lower the basin down to its use-position. When you’ve finished using it, a soft-close mechanism takes it back into the cabinet in a refined, quality manner. The mirrored doors of cabinet above the basin open via the same hand-recess, only this time you’re going for two neat plastic tabs which release the doors, to gain access to the three sizeable shelves.

The toilet is bench-style, leaving enough floor space for a reasonable-sized shower tray in front of it. There’s a curtain to confine shower water to the tray. And a towel rail runs across the roof. A second towel rail is above the window.

You have three sleeping options in the 4four. You can make single beds. Or a double bed, made by extending the bases of the settees out towards the centre of the caravan and then using the seat backs to complete the mattress. The double bed is of sufficient size to sleep three; say, parents and the youngest offspring.

Then you can create a fourth bed, by raising a bunk base from behind the backrests of the nearside settee. You can’t think of this arrangement as anything other than extremely cosy, but the fact that the 4four can give you beds for up to four in a 3.64m body length is a triumph of design.

The fold-up mattress that’s provided for the bunk gobbles up some under-seat storage space. So does the (nicely sturdy) wooden structure that you can fit to the bunk to stop the occupant from rolling out (onto the sleepers below!).

The seat bases are self-supporting, on substantial metal hinges. There’s space under the seat which runs along the front, too. This one isn’t self-supporting but it’s easy to raise and easy to hold up.

Top lockers running along each side will take care of the t-shirts.

If this caravan has an Achilles heel it’s the wardrobe. It’s barely 20cm wide, which might be fine in summer but when bulky coats are a necessity, there might be an issue. There’s a way around the problem, though: keep the coats in your car.

For coffee time, you can raise a table over the seating area that runs across the front of the caravan. The freestanding table lives in the wardrobe; very easy to get in an out provided that the wardrobe isn’t crammed with clothes!
The beauty of the U-shaped seating in the four4 is that five or six can easily sit around the table; brilliant if you’re planning on having guests.

Every aspect of the 4four’s styling is cool. Key elements combine to create its outstanding interior looks, and they’re best appreciated from a feet-up, relaxing vantage point in the lounge.

Bright white light is integrated into white ledges beneath the top cabinets. The same ledge styling appears across the kitchen and also the dresser forward of the door, this time with silvery-grey inset panels. The high-arcing roof light reaches to near the centre of the caravan; three LED clusters are set into its surrounding panel.

There are no curtains. Instead, a series of overlapping voile panels, each weighted with a thin plastic bar stitched into the hem to ensure they stay perfectly vertical. Each panel is on curtain tracks, so you can slide them back when you want a clear view out of the windows.

Upholstery fabric options are on offer when you choose your 4four. You could go for the darker (“graphite”) fabric scheme or lighter (“silver”) tones. And you can choose your cushions. You can go for bright orange, yellow or turquoise. The same colour appears on the reverse side and edges of the seating units.

For a caravan of its diminutive dimension, the 4four’s kitchen capacity is surprisingly large. Four drawers (including one above the heater, forward of the kitchen), all of them deep, will accommodate a lot of stuff. They all have a refined soft-close mechanism and little paddle catches that are finger-light to operate. Additional storage is to the right of the Thetford Duplex oven-grill.

There are small cupboards above and below the fridge, which is Thetford’s new 140-litre slimline unit, with an integral, large freezer section.

Adria’s in-line three-burner hobs are unique. And practical. The same design appears in the Adora Isonzo which we had the pleasure of long-term-testing in 2014. It delivered some quite ambitious meals easily.

When the 4four’s sink cover is in place there’s enough surface space, and a bit more on the dresser should you need it.

The zingy lime green caravan with multi-coloured sides was always going to provide a different sort of test tow. We headed out of our Lincolnshire test venue, Woodland Waters Caravan Park, through Ancaster. Heads turned at the traffic lights in the centre of the village and someone waiting for a green light missed their turn altogether, both car occupants clearly pointing to the lime green thing. In Grantham we stopped at a zebra crossing. Two people stopped, mid-way across the zebras, jaws dropped.

The 4four’s towability had taken second place to its capacity to turn heads. It was, of course, fine in terms of road manners.