A single-axle caravan of 7.36m isn’t the easiest of caravans to tow, although no problem for experienced towers. This led us to thoughts that the Seine might find many fans among buyers of caravans to site on a seasonal basis. With a delightfully spacious lounge and the virtue of those ratchet reclining pillow sections on the beds, this is a really comfortable caravan with a lot going for it 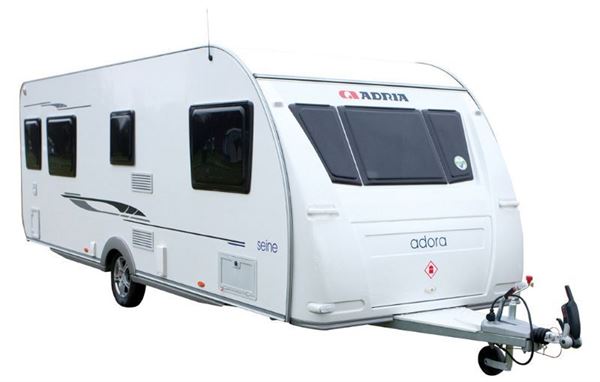 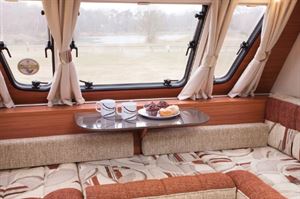 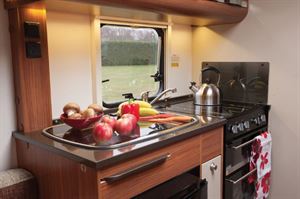 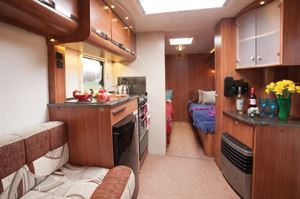 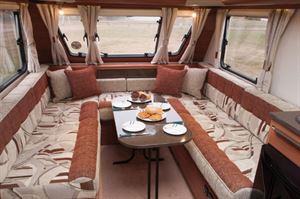 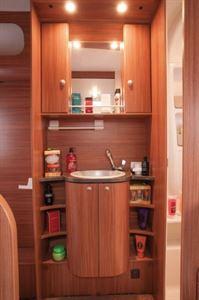 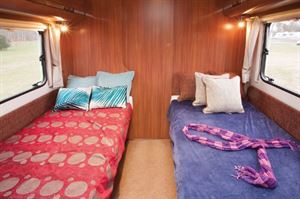 Ideal for single-bed fans and for seasonal siting

We’ve often remarked that twin-beds should be regarded just as much as daytime, chaise longue-type relaxing places as night-time retreats. The Seine, though, has a feature that makes that daytime function even more practical. Each of the single beds has a section at the pillow end which can be raised up, rather like a pool-side sunlounger.

You can get cosy here with cushions and pillows, to watch your television. This is not the only attribute that enhances relaxing opportunities in the Seine. The lounge is U-shaped, so you can spread out and make the best of the large seating area. These two features are the defining qualities of the Seine. Its layout gives you an offside kitchen and a rear shower room…

The shower is on the nearside. Its walls are wall-boarded, rather than plastic or GRP-lined; compared with most British-made caravans, this is unusual. Two spotlights are set into the shower ceiling (nice!) and three shelf areas are here for the shampoo-type paraphernalia (even nicer!). Importantly, two of these shelves have deep edges, so that you can leave shower gel-type containers here when you’re towing.

The delightful pale grey basin is set into a curved cabinet in the centre of the room. When you open the doors of this cabinet they move right back on their hinges, making it incredibly easy to get at the contents. Cabinets on both sides of the mirror, plus three shelves on each side of the lower cabinet and a large shelf over the loo on the nearside make this one of the best shower rooms in terms of storage opportunities for small items. There’s a white plastic towel rail mounted over the sink but only a small hand-towel could go here because there’s not enough space between the rail and the sink for a shower-sized towel – and there are no other towel loops or rails in the shower room.

The twin beds are wider than average, at 83cm, and the nearside bed is 1.98m long; that’s 6 feet 6 inches. The offside bed is 6cm shorter to allow for the table store. The Seine, therefore, is a caravan made for tall buyers. The mattresses are very firm foam; people who prefer soft mattresses might find they need a mattress topper.

At the foot of each bed is a wardrobe; they are mounted against the wall, and the rails run transversely. Rails like this sometime mean that it’s difficult to get at items hanging at the back but Adria has got round this by making the rails slide forwards, giving easy access to the whole rail length.

Strips of light run above and below the top lockers. There’s a central roof light of considerable style, with three bulbs set into a mirrored mount, with a frosted shade below them. The bedroom’s daytime function as a feet-up, relaxing lounge is enhanced by the position of the TV bracket. It’s mounted on the rear wall of the dresser and can be turned towards the bedroom. In this position it does intrude into the corridor but there’s sufficient space to walk to the kitchen.

The lounge double bed base is made of webbing-linked slats which draw out from under the front seat. Storage The bed bases lift easily and are held up by hefty springs. There’s an exterior hatch to the nearside bed space – and it’s 1.07m long, which means you can use this space to put in fairly large folding chairs and awning tables. Top storage in the bedroom consists of four lockers.

There’s a vast amount of storage area under the lounge. But there are no springs to hold up the wooden bases when you delve inside the side spaces. A hinge-down door gives easy access to the space under the central front seating area. Top storage here is six lockers. Just forward of the bedroom and alongside the nearside dresser is a cabinet that offers a multitude of use possibilities. It has five deep shelves. Garments? Books? Shoes? Your laptop? It will accommodate all of these but we think the cook will want to take over at least some of it, as you’ll see when you read our review of the kitchen.

The freestanding table slides into its own cabinet at the foot of the offside bed. It’s quite heavy but don’t criticise it for that, because it is substantial and doesn’t wobble as you’re applying pressure to your plate to cut food. It is, though, only 53cm wide.

The distance between the edges of the settees is 75 cm, which leaves a gap of around 11cm on each side. We discovered that this means that you have to sit on the edge of the settees to dine comfortably close to your plate. It also means that, when plates are opposite one another, normal-sized dinner plates touch each other in the centre of the table. On the plus side, you can sit five around this table, because the seating is U-shaped. A coffee table is above the central front seat section. It folds flat to the wall when you want to use this area for seating.

Four scatter cushions enable you to get comfortable when you want to put your feet up and your shoulders against the front wall. There’s plenty of relaxing length; the nearside settee is 1.75m long and the offside one is 2m long. Lounges in caravans don’t come much larger than this! It’s in the lounge, though, that you especially notice that the amount of daylight in the caravan is considerably subdued by the tinted windows. They look stunningly starkly smart from the outside, though.

The kitchen surface area is almost entirely taken up by the three-burner hob, sink and drainer. The plus point is that the drainer is fixed, which is a lot easier to use than the detachable type. There is a cleverly-designed pull-out worktop. It’s under the drainer. The clever bit is that you can pull it partly out, or, as we discovered during our test, you can pull it out completely and place it over the glass top of the sink and drainer, to use as a cutting board.

At 53cm wide it’s almost as long as the glass top, so fits here in a really useful manner. Two drawers sit between the fridge and the oven and grill. They’re deep, but only 16cm wide. Below, a hinge-down door opens into a small cabinet. And there’s a good-sized drawer in the dresser opposite. Heating is the Truma blown air system, centering on a convector type unit situated under this drawer.

A five-shelf unit sits just to the rear of the dresser; we think tall cereal packets and fruit juice cartons will find their way into here, used as the main kitchen storage area. Above the dresser is one of the Seine’s star styling features. It’s a cabinet, with white opaque doors in a slight S-shape, and 12 tiny LED lights set into a mirror at the back. Would this be used for kitchen items? It’s possible, but you’d chose your items carefully, because you won’t want items to obscure those lovely lights inside!

Slovenian-made Adrias do things differently. The main roof light is above the kitchen, rather than above the lounge, as you’d find in British-built caravans. The advantage is that you have a large aperture exactly where you may need it to allow cooking-generated steam to escape. Top kitchen storage consists of three cabinets. Racks for four mugs and seven plates are in here.

There’s also a mains socket, clearly designed so that you can place a microwave in the central cabinet, which is easily of microwave proportions. Adoras don’t come with microwaves as standard, which is another way in which they differ from UK-built caravans in this price range. There’s a power point at the forward end of the kitchen but if you were using this for a kettle, it would have to sit on the glass top that covers the sink and drainer; there is no actual kitchen surface here. Using this kitchen effectively would necessitate organisation; you can’t get at the sink while you’re boiling a kettle – and you can’t place the kettle on the drainer with the glass top open, because the top then obscures the socket. We know many caravanners use mains kettles, which is why we comment on it. There is an easy solution, though: use a hob kettle!

This is a much longer caravan than is typical on a single axle; British-built caravans of this length are on twin axles. The rear overhang is much longer, and you have to be aware of this, particularly on tight corners. That’s because a single axle will track around corners on a tighter line in relation to the car than will a twin-axle caravan.

You have to be very conscious of the position of the rear of the caravan, something of which we were especially aware during our test tow, both around tree-defined corners at Woodland Waters caravan park and at a traffic-light controlled crossroads in the village of Ancaster, where precision was required to ensure the wheel and the kerb didn’t come into contact, and also that the rear of the caravan kept clear of oncoming vehicles as we turned the corner. Out on the open road the long Seine towed stably, but, for our money, we’d want to have the ATC electronic stability system installed.