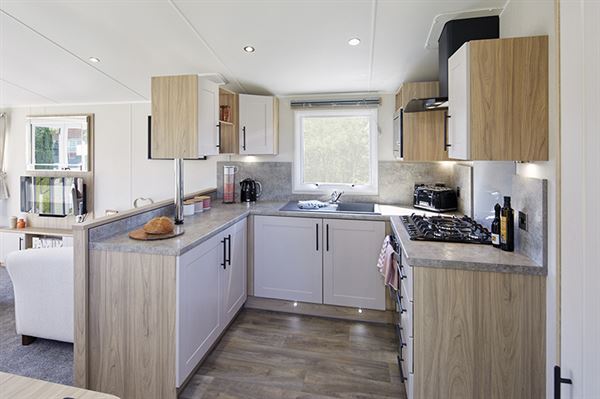 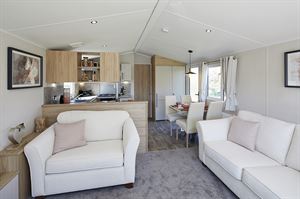 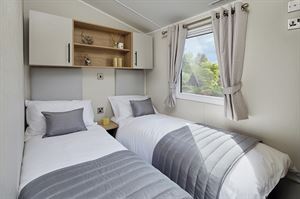 A level of luxury that's far above its affordability price status, a five-burner hob that will wow keen cooks, and a layout that’s clearly designed for family practicality; the 2021 Manor has appeal in spades.

One of a number of holiday homes in Willerby’s portfolio that are designed with affordability at their heart, the Manor has lots of standout style features and luxury touches that combine to give it a special appeal and character.

Among the first things you notice as you begin to explore the Manor is the huge five-burner hob, and the sink-drainer unit that’s made of obvious-quality composite material (far more high-end domestic in style than the stainless-steel sinks often found in holiday homes).

The layout is a clever amalgamation of the open-plan and separate room concepts. That’s created by the plan of the kitchen, forming an L-shape that makes a natural divide from the lounge. We can see this working really well for young families; keeping lounge activities well separated from the kitchen function while the cook is getting on with tasks. And the kitchen is plenty large enough for older kids to get involved in meal prep tasks.

Kitchen storage is more than sufficient, with four drawers, three upper cabinets, plus three lower cabinets, shelves and even a four-bottle wine rack above the microwave. Spotlights inset to the bases of the units create a luxury look and well positioned downlighters give you plenty of task illumination.

The Manor is a 12ft home, available in three lengths. The lounge/kitchen/dining area is largely the same layout in each of the three variants. Two of the versions have two bedrooms; these are 35ft or 38ft long. There’s also a three-bedroom option, at 38ft.

The two-bedroom versions have the luxury of a king-size bed; a nice surprise at the Manor’s price level. The three bedroom model has a standard double bed. 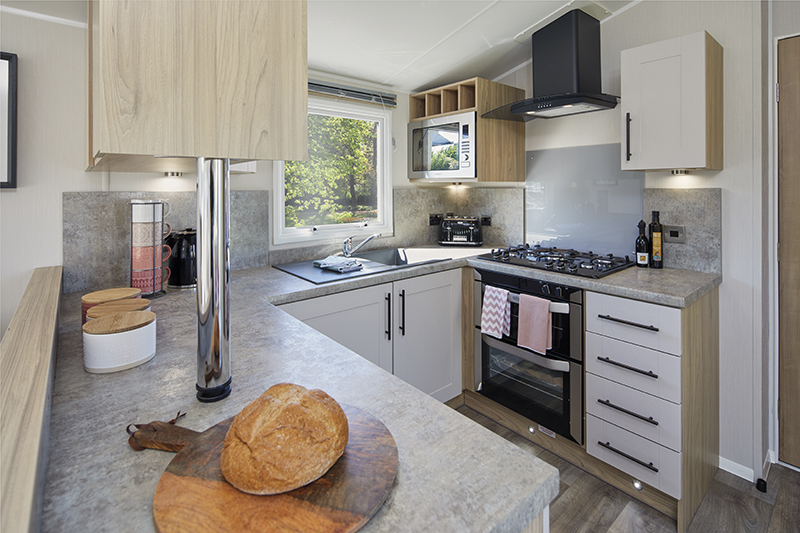 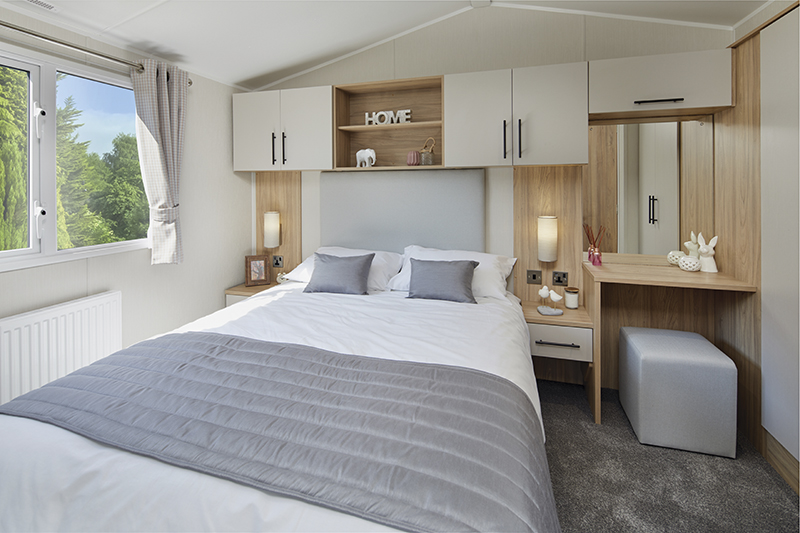 Whichever model you choose, you’ll be impressed with the Manor’s lounge ambience. The patio doors and windows span almost the entire front. Upholstery is a delightful soft grey shade. The carpet is grey, too, slightly darker and with a luxuriously deep pile that catches the light.

The whole palette is predominantly pastel, with subtle grey and apricot vertical lines on the cream curtains completing the look. We love it! We also love the practicality of the use-anywhere square footstool with lift-top storage, and the style of the bevelled-edge mirror that sits above the smart, convex, black, log-effect ‘fire’.  It all adds up to more luxury than you might expect, given the Manor’s affordability status. Would you expect towel warmers in both the shower room and en suite washbasin/toilet toom? Not necessarily – but the Manor provides these luxury touches.

To keep its price in the affordability range, Willerby hasn’t included as standard a washer/dryer or dishwasher, but buyers can choose either of these as an extra. A Bluetooth sound system is available, too, and you can order your Manor with a fully galvanised chassis, which is especially advisable if you have chosen a park that’s near to the coast, where salty air can, over time, create chassis corrosion.

Interestingly, the Manor was initially conceived as a special edition home made for specific parks. That was in 2019. It quickly established its popularity, hence being launched as part of the mainstream range for 2021.

The Manor is now on display at all three of Willerby’s showgrounds: