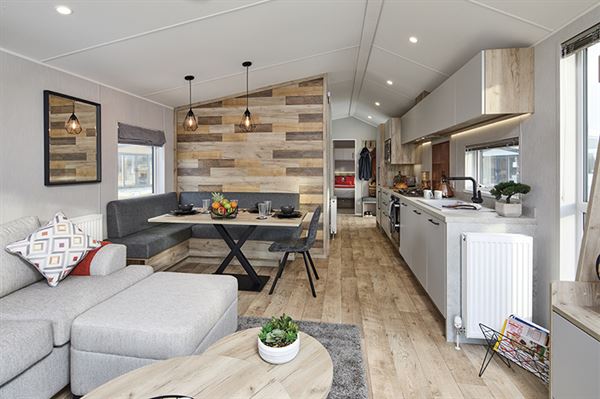 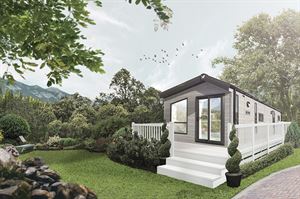 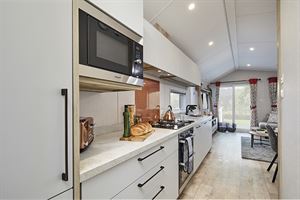 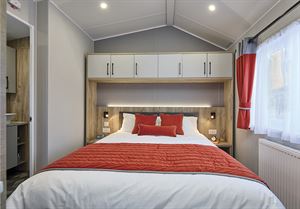 Willerby's holiday home of extraordinary design, using reclaimed wood styling as a prominent décor feature – and with a super-large kitchen.

The Astoria has natural, reclaimed wood styling at the heart of its décor, teamed with vivid terracotta tones; the Astoria is a style-statement holiday home.

There’s plenty of terracotta in the outstanding geometric pattern of the cushions and the curtains that are tied and topped with bright terracotta fabric. And terracotta mixes with a warm, coppery tone for the kitchen splashback.

The reclaimed wood plank effect of the flooring is delightfully rustic – and the feature wall in the dining area, composed of horizontally aligned planking, in shades of brown, fawn and peach, is arguably the Astoria’s stand-out décor element.

A kitchen with wow factor

There’s much more than splendid styling to mark out the Astoria as a very special holiday home. The layout is extraordinary. Whereas most holiday homes have kitchens that are U-shaped or L-shaped, the Astoria’s kitchen is linear, running the entire length of the long corridor that takes you from the dining/lounge area to the bedrooms. It has three surface areas – to the left of the hob, between the hob and the sink, and on the other side of the sink. This means that up to three people could be working on food prep at the same time; brilliant for families who like to all get involved in the meal-making process. To the rear of the kitchen is the Astoria’s main entrance; a hallway, complete with a seat and a place beneath it for footwear.

The reclaimed wood styling appears in the bedrooms, teamed with bright orangey-terracotta for the plain curtains; delightful!