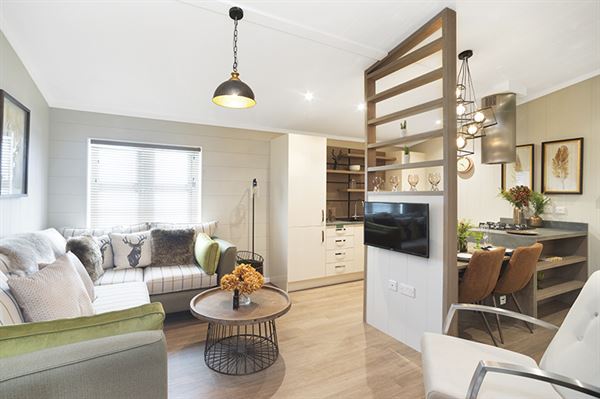 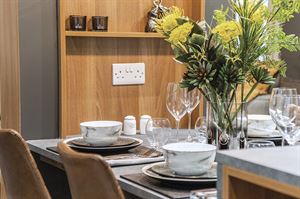 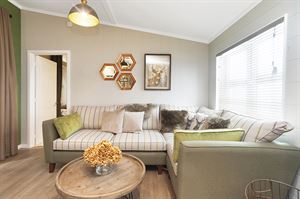 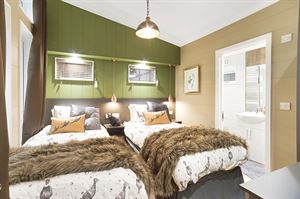 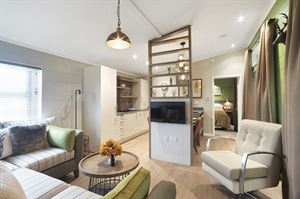 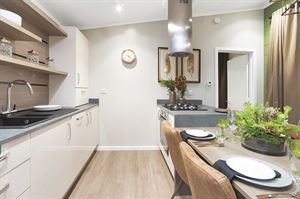 We’re strong fans of design innovation and the Savannah Centre Lounge amply falls into that category. Who would have thought that a dining table could form a split-level extension of a kitchen surface and still have its own, clear, dining identity? And who would have thought that a full-height wall, just the width of the table, would create a barrier that makes the lounge feel totally separate from the kitchen/diner?

Those are the things that distinguish the Savannah Centre Lounge. And, yes, the lounge is in the centre, with bedrooms on each end. It’s the central area, though, that takes, err, centre-stage. We love the cosiness of the lounge. It has an L-shaped sofa and a position for a television in the centre of the living space. On the lounge side, the part-wall’s purpose is a media wall, with sockets for a television. On the kitchen side, the wall has a deep, natural walnut panel with three recessed shelves.

The kitchen feels rather like a galley configuration in that the sink is on one side and the hob is set into the surface opposite. But it’s more than that, because the table is integrated into the kitchen, so serving food would be super easy. Like the lounge, the kitchen/dining area has a cosy, cohesive feel.

In fact, there is not one Savannah Centre Lounge but two – and with different layouts. They’re both the same size, 45ft by 15ft, and both have the lounge in the centre. One has two bedrooms and the other three. That’s the one to go for, then, if you are looking for a family lodge.