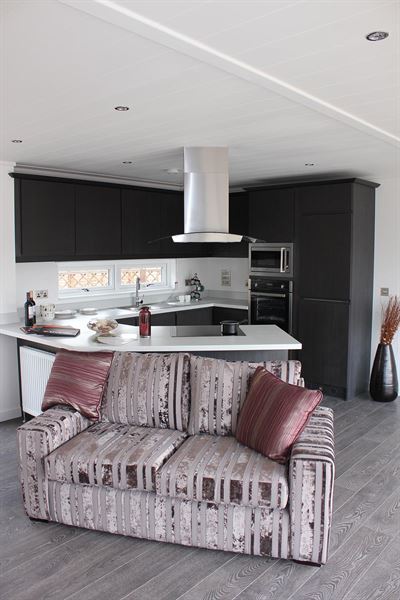 Action-packed: that’s probably the best description of Omar’s past year. It’s all been happening with their range of park homes and leisure lodges.

During the last 12 months they have achieved 20 per cent growth to become, by volume, Britain’s second biggest park and holiday home manufacturer. That has resulted in 100 new jobs bringing the total to 227. As a result, there are plans for expanding their 180,000sq ft premises in Brandon, Suffolk, by another 40,000sq ft.

That will enable Omar to increase production, currently running at 20 homes per week, to 24; singles and twin units, residential park homes and leisure lodges.

Among them will be Finnish Log lodges, the first of which, a 40x22 Contemporary, came off the production line a short while ago following an agreement last year between the two companies.

The range will also include Wessex models following Omar’s takeover last October. The first of those, coincidentally also a twin-unit lodge called the Contemporary, was among 28 homes working their way along the production line when I visited.
But there is going to be no badge engineering at Brandon: all three ranges – Omar, Wessex and Finnish Log – will have their own distinct identity.

In one year’s time, the parent company is going to be 50th years old: at the way things are going, there will be plenty of celebrate.