DEER TAKE OVER FROM CARAVANNERS AT LAKELAND PARK 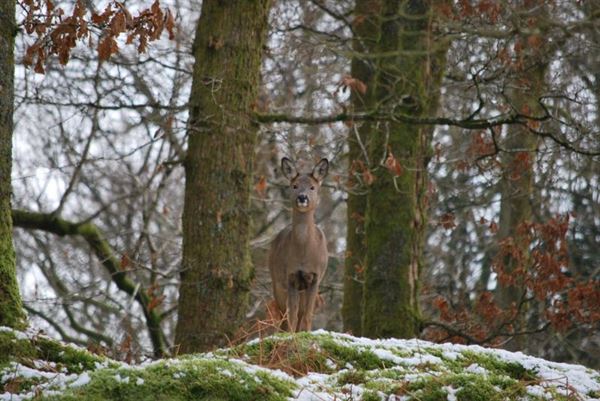 Despite being closed for the season, a Lakeland holiday-caravan park is having to accommodate a raft of extra guests, none of which is paying and all of which need constant feeding.
The unexpected visitors to Skelwith Fold in Ambleside, Cumbria, arrived shortly after a prolonged spell of mild weather turned to freezing Arctic conditions in mid-January.
As the temperature plummeted and snow fell, red and roe deer plus other wildlife led the friendly invasion of the 130-acre park, coming down from surrounding high ground to find shelter and food.
The extra animals and birds mean that the park has now had to step up its winter-feeding programme to ensure fair shares for all.
Skelwith Fold always plays host to a wide number of different species. So winter feeding stations are set up throughout the grounds and kept regularly topped up after holidaymakers leave in November.
But the park now has many more deer than normal. Although it does not re-open until March, Skelwith is fully staffed, with all employees members of the park’s conservation team which has helped the park achieve a number of environmental accolades over the years.
Those include the David Bellamy Conservation Award at its top gold level and a letter of praise from Prince Charles for its success in re-establishing colonies of red squirrels.
For more information and photographs visit  www.skelwith.com