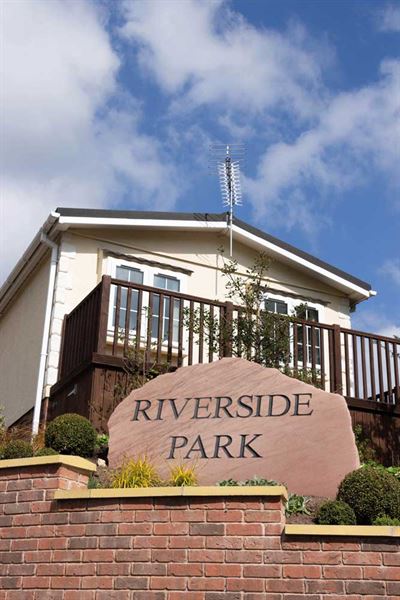 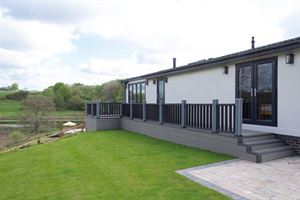 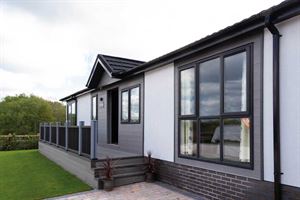 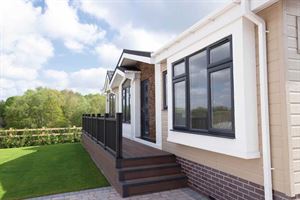 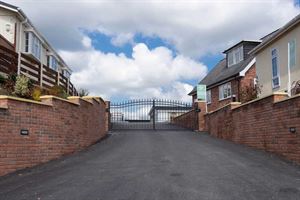 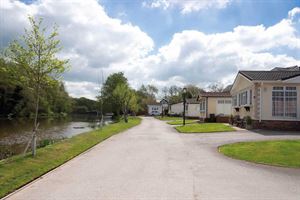 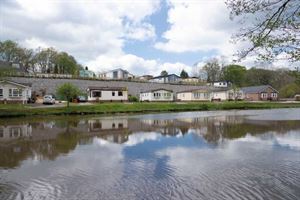 An imposing brick-wall entrance set into banking curves inwards towards huge wrought iron gates. On each side, high up on the banking, the name Riverside Park is etched into enormous smooth-crafted blocks of red sandstone. Instantly you are in no doubt you are entering a showpiece park.

Riverside Park is a family-owned and run estate of just 27 homes. This main entrance leads to the higher area of Riverside, where homes have panoramic views over open farmland, a nature conservation area and, below, the river which gives its name to the park. It’s an awesome vista.

Show homes are here and there are plots prepared for more homes.

This is a park of two levels – which gives rise to many of its defining features. A separate gated entrance leads to the lower level, where homes have a closer view of the river, which is canalised.

This area is embedded in Cheshire’s salt mining history. The largest salt mine in the UK is a few miles away, at Winsford. The River Weaver was made into a canal to transport salt from the mine. Today, the tranquil river-canal is a delight for walking and fishing. This is a beautiful place in which to make your home. And that’s important to the family who owns the park – because they live here, too, in a house on the edge of the park, bordering the Weaver which runs shallow between wide banks.

It’s just four years since Andrew and Gina Thornley and their daughter and son in law Sam and Darren took over the park.

In that time, they have ploughed huge quantities of investment and time into making Riverside the prestigious park it is – including crafting a magnificent, towering feature bank of limestone blocks. Every stone has been placed and faced by hand to get a flat edge at the front of the bank which separates the two levels of the park. A massive tonnage of stone has gone into creating the structure, six metres wide at the base and rising up the natural bank in a shape that’s almost like half a pyramid.

Darren is showing me around the park, rightly very proud of this spectacular rock centerpiece, now beautifully garnished with small shrubs around the base. Planting is a feature which defines Riverside; shrubs and low plants with a wide variety of foliage colours, many set into bark beds, create an artistic look; £4,000-worth of plants have gone in and that’s a tiny fraction of the investment going on here. 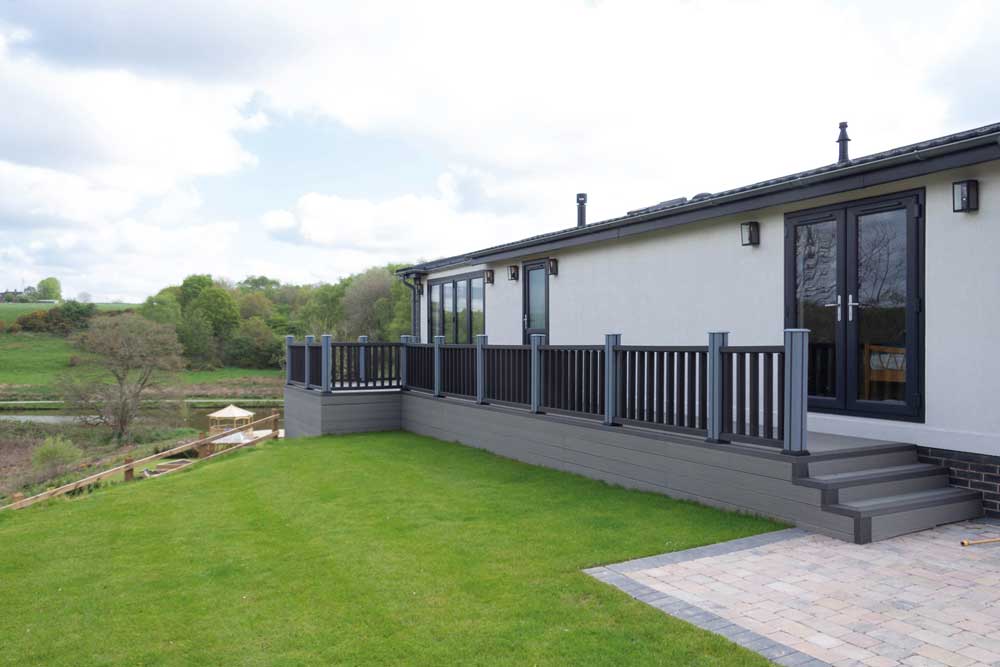 Among Riverside’s park homes are two attractive brick-built cottage-style homes. One of these is for sale, at £169,950. Along with the show homes and the new plots, it has a lovely view of the farmland and river far below.

A Willerby Delamere 40ft by 20ft home is £265,000; the Delamere is the most luxurious of Willerby’s range of residential park homes.

There’s a Tingdene Havana 45ft by 20ft home at £275,000 and a futuristically designed Pathfinder Evolution 45ft by 22ft home at £310,000. This spectacular and rather opulent home is complete with a log burning stove a fully glazed snug area with skylights. The elegance and originality of the Evolution seems to sum up the spectacularly crafted character of Riverside Park.

Part exchange can be arranged, through Quickmove.

More plots line up along the area of the park with the best views, ready for homes to be installed. In the meantime, with most of the park’s landscaping work completed, Darren and Sam are turning their attention to wildlife elements. They’re applying for David Bellamy Conservation status.

They’ve invited the Mid Cheshire Barn Owl Conservation Group to install a barn owl box. And ‘bird rafts’ have been placed in the shallow river. The emphasis is most definitely on encouraging wildlife to the park, which overlooks a wetlands area. It’s home to badgers and foxes and there is a heron colony here; 22 was the count last year, Sam explains.

Bird boxes are up along the limestone bank; these have been made by Darren, with the help of Sam and Darren’s daughters, Saren, aged eight, and Frankie, five.
And there’s more to emphasise the family aspect: the name of the company. Olympic Park Homes, which owns Riverside and sister park Delamere, gets its name from a family connection.

Olympic’s founder is Andrew Thornley, Sam’s father – and his other daughter is Olympic rowing silver medallist Victoria Thornley; one of the country’s leading scullers.
There’s one fascinating family element, though, that happened by chance. It’s the gigantic stones bearing the name of the park at the entrance. Darren explained: “Andrew Thornley’s grandfather used to own a farm and a quarry in Congleton. The stones have come from the land his grandfather used to own, which incorporated a sandstone ridge.
It was not until Andrew went to the farm to obtain these stones that he realised the family connection; he recognised the location from his childhood.” The stones, therefore, have come home to the family business.

This gated community, pet-friendly park is clearly perfectly located for riverbank walking, as I discovered just before I left. I crossed two ancient iron bridges from the road by the entrance to the park and walked on the opposite bank to the park.

This place feels delightfully remote and very peaceful, yet the convenience of a large supermarket is only a few minutes’ drive away and the lovely village of Whitegate is two miles down the road.