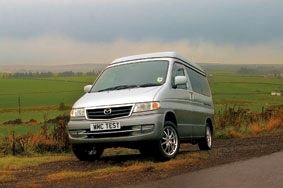 bb1df235-0fe1-4854-8dc4-538fa655e130
You’d expect Wellhouse Leisure’s contender to be right up there with the very best, given that the company’s owner, David Elliott, was one of the first importers to latch onto the fact that the Bongo/Freda had serious potential as a motorhome conversion here in the UK.

Well, having spent a day with the company’s smart V6 petrol demonstrator model, I can confirm that it most definitely is.

Wellhouse is a well-known name among the Bongo/Freda fraternity, but it’s not just because it was one of the first to get in on the act. In fact, the company’s entire portfolio of conversions has an extremely good reputation with those who know, and it’s not just Bongos, either – Wellhouse imports a wide range of vehicles from Japan on a regular basis, and a quick glance at the company’s website reveals just how diverse the available range really is.

We, however, are most interested in Wellhouse’s Mazda Bongo, and after the inevitable diesel clatter of the Outback diesel (they’re all the same, whatever the converter – and if you’ve ever heard a Ford Ranger pick-up truck, you’ll hear it for yourself, for it has the self-same engine), the silky-smooth purr of the 2.5-litre petrol V6 engine is a revelation.

The Wellhouse’s simple rock ‘n’ roll design means that make-up is a swift affair, and the resultant bed measures a healthy 5ft 9in by 3ft 10in. Taller would-be owners will be heartened to learn that judicious use of the toilet box and an optional cushion can actually extend one side of the bed to a full 6ft 7in in length, too.
In fact, the only drawback to the Wellhouse’s bed is that it puts some of the kitchen cupboards out of commission, although more importantly, the fridge (a Waeco CoolMatic compressor type), toilet and kitchen sink are all still perfectly reachable. 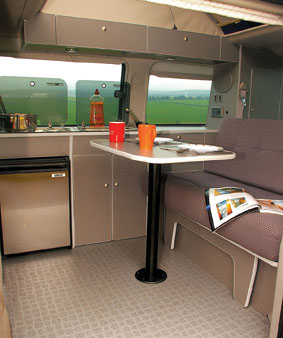 I also managed to finally climb up into that famous elevating roof, and found that the bedroom created by closing the floor hatch and laying down the (extremely well padded) bed base was more than long and wide enough to accommodate my six-foot frame, although I doubt my wife would have squeezed in there too. For a couple of children, however, it’s ideal, and well-lit by day with the side curtains zipped open, and by night with the standard-fit roof light.

Back downstairs, the kitchen is surprisingly big, and extends all the way from the rear of the driver’s seat through to the forward-facing wall of the storage units at the rear of the vehicle. The two-burner hob is of Cramer origin, and there is a positive embarrassment of locker space, including a large locker by the settee and a pair of shallower lockers at eye level. The provision of a couple of halogen downlighters overhead is a thoughtful touch, too. The kitchen sink is positively huge, too, and both it and the hob sports its own glass folding cover.