Like all Vantages, the Gem is beautifully constructed and well specified with comfortable beds. The compromise comes in having a small kitchen, poor under bed storage, and limited access, with no rear door and a partially obstructed side door. 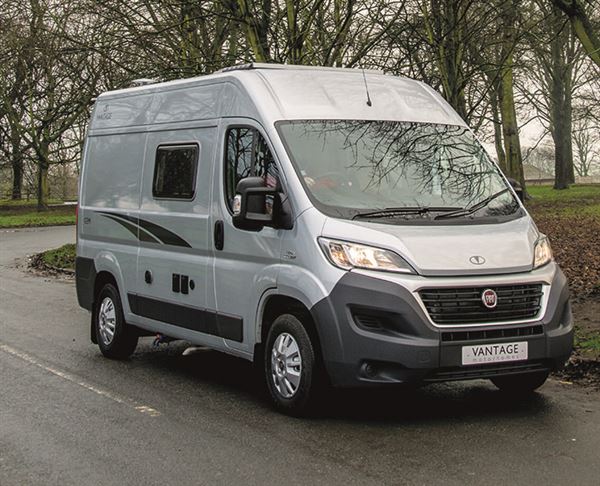 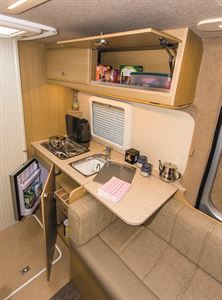 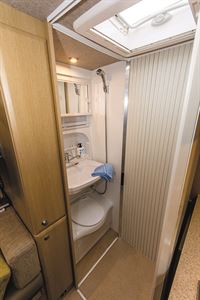 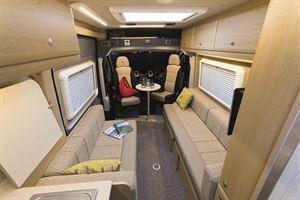 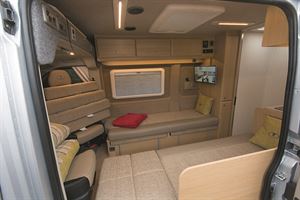 The Vantage factory is full of silver Ducatos, as that’s the only colour available. But the Gem does have a few identifying features. Based on a medium-wheelbase, it’s smaller than other current Vantages, apart from the Med. Its windowless back doors indicate a front lounge and there are discreet ‘Gem’ decals on its rear flanks.

Fiat’s 130bhp Euro V+ is the standard engine. Standard specification is quite high, with a 100W solar panel and a 25-litre external gas tank.

Vantage made its name producing high-quality two-berth campervans, mainly with rear lounges. The company’s more recent front lounge range differs from many rivals by not incorporating rear travel seats. Instead, each model provides a pair of comfortable inward-facing settees, converting into either single beds or a huge double.

You enter via the sliding side door – there’s no alternative rear entrance – where there’s an electric step and an overhead drip-rail with awning light above. The nearside settee partially covers the door opening. The offside settee’s forward end is sculpted so the driver’s seat can turn fully. Even so, the front seats are several inches higher than the settees.

Aft of the lounge is a compact kitchen unit on the nearside and bijou washroom opposite, with a tall, slim wardrobe slotted between it and the offside settee. A tambour door runs between kitchen and washroom. If you’re in the kitchen area, it rests in front of the back wall and washroom. If privacy is required for washing, slide the door the other way to shut off the living area and kitchen. The floor panel lifts to reveal the shower tray.

The largely beige décor is restrained and hard-wearing. Upholstery is mainly tweedy, and carpet-covered walls are enhanced with hessian-effect panels while work surfaces are granite effect. The tough flooring is overlain by loose-fit carpet.

The test ’van was delightful to drive, and, with the great door mirrors, one hardly noticed the lack of internal through-vision. Even so, we’d specify the optional reversing camera and parking sensors.

The lounge accommodates four people easily. Those flat settees are as comfortable as they look. Scatter cushions are provided. There are two tables. One is small and perfect for a snack, with its post located between the cab seats. The other larger, rectangular table uses the floor socket in the lounge.

A Fiamma tripod (and a second, shorter table leg) allows either tabletop to be used outside.

The kitchen is undeniably compact. The sink, though deep, is small. But there’s a nifty draining rack and a tray sink lid. The hob is a simple Dometic two-burner with manual ignition and glass lid. There’s no room for an oven or grill and the compressor fridge holds just 49 litres. In the corner, behind the hob, are two mains sockets, plus two USB ports, and the worktop is well illuminated by an LED strip under the overhead cupboards. But what makes the kitchen properly usable, despite its size, is the large work surface which stores against the wall and drops down above the nearside settee.

Storage-wise, there are two overhead cupboards, a drawer under the fridge and a big door alongside. But we’re not sure where you’d hang any towels. There’s nowhere for a rubbish bin, either.

With a capacious bench toilet below a drop-down basin with soap trays and toothbrush holder and a mirrored cabinet above, the washroom works well. The shower tray (moulded in-house by Vantage) has only a single drainhole in the front corner. The shower itself has a separate control and wall bracket. There’s a single ceiling light unit and a Heki sunroof.

With no rear doors, once the beds are made up, you’ll have to clamber over them to get out of the ’van.

Making the offside bed merely requires removal of the backrest, while on the nearside you pull the extension across the doorway and slot in two shorter backrest cushions. The only downside is a cab full of excess cushions. The double bed requires more stretching, but is still comfortable.

As the water tanks are underslung there’s considerable space beneath each settee, even though the offside one also houses the Truma heater. However, access to these spaces is the bugbear – the seat bases must be held up with one hand, and the double bed base sections of the offside settee must be slid outwards. Gas struts would make life much easier, as would front access to the settee bases.

The slim wardrobe has a shelved cupboard beneath, and there are three overhead lockers above the offside settee. There is also space inside the rear barn doors for hanging the folding chairs that are standard equipment.

There are two 105Ah leisure batteries under the driver’s seat. With the roof-mounted solar panel, there should be no difficulty powering the compressor fridge off-site. Both water tanks are insulated.

This is an abridged version of the full review appearing in the May 2016 issue of MMM.