With stylish good looks and a spacious and airy interior there's lots to like aout the Rapido Le Randonneur 7096+ but it's let down by the head-banging lockers above the rear bed. 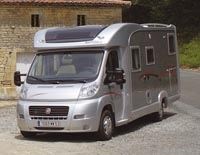 RAPIDO has quite a following amongst fans of low-profile motorhomes.

Well-built, classically furnished and with a good choice of layouts, the French firm has grown its range – and its sales – steadily.

Here is the answer for those more adventurous buyers tempted by the colourful flanks of a Dethleffs, the big overcab sunroof pioneered by Knaus or the sheer modernity of a Bürstner.

It’s still recognisably a Rapido, but one with a bit more flair. A Rapido plus a bit extra.

But you don’t need to be a marque expert – or a motorhoming anorak – to spot the 70+ from a hundred paces. Its shape and logos may be familiar but the all-silver-metallic bodywork sets it apart in some style.

It certainly looks the part, both outside and in. And Rapido has virtually matched the originators of this feature (Knaus) in the detailing around the roof, using plastic mouldings of an automotive quality.

And the side walls are made of Alu Fiber (glass-fibre with an aluminium outer skin, which is claimed to be stronger than aluminium on its own and allows the metallic colouring) – a first for Rapido.

There are other details of upgraded specification, new layouts too, and even optional leather upholstery to further distance the 70+ from the 70-Series. Be in no doubt, this is the ultimate low-profile in the eyes of the men from Mayenne and, at first sight, it seems to live up to the word ‘plus’.

I did a double-take as I read the ‘130 Multijet’ badge on the front wing of each of the three new 70+ models at Rapido’s unveiling. I had been looking forward to getting back behind the wheel of Fiat’s mile-munching champion – the 160 Multijet Power – and I felt a pang of disappointment.

A few hundred kilometres later the new Ducato was providing all the performance I could ever really need. Still, I’m sure most buyers will want the ultimate engine for their ultimate Rapido,

Whichever engine you choose, the X2/50 Ducato has much to commend it. The driving position is so much more car-like than the old Fiat and the dash has a logical layout with plentiful storage.

If you want your Rapido to have an instant ‘wow factor’ – a definite plus – this is a must, adding an air of opulence and a quality of trim that would match any £50k automobile.

Open the caravan door and that feeling of well-honed quality continues. Just inside the door are light switches and a coat hook, shaped in the style of one of the dancing men on the Rapido logo. There’s a mirror here too, but as you enter for the first time you’re more likely to take in the warm ambience than your own reflection.

And it’s not just the quality of the hide on the seats that will impress. The furniture genuinely looks – and feels – a cut above its contemporaries. Pity then that the high-level lockers lack any form of positive locking, unlike lesser Rapidos. More of a minus, that.

Even on one of the gloomiest July days I can ever remember, however, it felt light inside – and spacious. With the cab seats rotated, the table folded in half and a bit of sunshine streaming through the roof vents, the 7096+ felt every bit the 7.39m-long motorhome.

The wide-open central space where you come into the vehicle not only ensures that the chef never feels hemmed in, but it creates a very positive – very roomy – first impression.

The kitchen is a big plus over most rivals – and other Rapidos – and we struggled to find a minus here.

If only I could say the same of the rear bedroom.

As soon as I climbed the two carpeted steps to the rear bedroom (noting the easy access), I groaned. A groan of anticipation of the bumped head as I sat up in the night and saw stars, not through the Mini-Heki vent but from the thoughtlessly positioned cupboards over the head of the bed.

Do away with these and there’s plenty of height to sit up and the reading lights could then be repositioned at a better height, too.

Verdict
The Plus range from Rapido looks plusher and boast a more comprehensive spec than most of the opposition. In fact, we can see it stealing sales from Rapido’s A-classes as well as from rival brands.

Much of our test ‘van really won us over – from the upmarket ambience to its spacious layout and the flexible seating. But flawed bedroom – and few minor details – stopped us really loving the 7096+.

A full version of this review first appeared in the October 2007 issue of Which Motorcaravan. To subscribe to the magazine, click here.