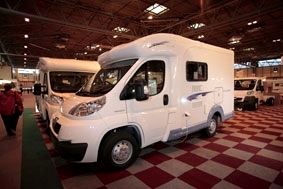 If the length of the queues of curious show-goers waiting patiently to climb aboard the Pioneer Pizarro was anything to go by, this was the undoubted star of parent company Autocruise’s NEC show stand.

This isn’t the first time a rear-door design has appeared on Autocruise’s books, as it had a so-designed low-profile in its range a few short years ago, but as the fickle tastes of the buying public waxed and waned, the company clearly felt that it wasn’t what buyers wanted, and it was phased out.

Now, however, it’s back, and you have to say that this is one seriously good-looking little vehicle. The new Peugeot Boxer base vehicle gets things off to a good start, of course, and it doesn’t even seem to matter that the front bumper on this £38,000 motorhome is only half-painted and its door mirrors entirely denuded. The baby blue sills and rear arches, together with the generous application of LED lighting (marker lights and high-level third brake light) and smart graphics and badges certainly make the Pizarro stand out from the crowd.

The (also LED) gigantic vertical tail-lights are possibly just a little too gigantic for such a comparatively compact vehicle and Autocruise’s attempt to mask the roof join over the side windows could arguably have been a little less obvious, but it’s not difficult to imagine this motorhome having considerable showroom floor appeal.
And the plaudits are likely to keep coming thick and fast once prospective buyers climb through that rear door into the motorhome proper. Some may not like the idea of entering the Pizarro through its end washroom, but in reality, the toilet and washroom area (the shower cubicle is entirely separate and banished to the nearside corner directly opposite) can be closed off with a sliding concertina partition, and a proper door shuts the entire area off completely from the lounge.

Speaking of which, the Pizarro’s shallow L-shaped settee is ranged along the offside wall and is enlivened by firm fixed upper back supports and some particularly solid-looking and impressively tactile cabinetry. Meanwhile, the lack of a side door means that the kitchen opposite has considerably more worktop space than it has any right to, not least in view of its lift-out plastic drainer. The deep sink and Spinflo Triplex spark-ignition cooker impress, too, although the latter’s oven and grill are combined, not separate entities. MLC

Summary
Good looking and imaginatively designed. The bed takes up much of the Pizarro’s available interior space, but the washroom impresses.