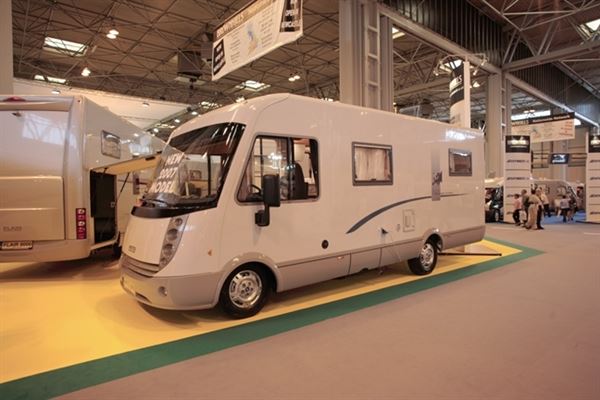 This is one of the first full-sized A-Classes on the new X2/50 Fiat Ducato to put in an appearance here in the UK and of the bewildering array of floorplans available for 2007, the new 69EGB is without doubt the headline-grabber, because it has been specially developed for our market (hence the GB) at the behest of the importer.

Externally, the Arto's plain sides and rear are a bit too Teutonic for some tastes, though the front is more striking and has the new N+B family look. You might have expected alloy wheels, however, at this price.

Inside, matters improve apace, and you soon understand why the 69EGB was the star of Niesmann + Bischoff's NEC stand. Where the otherwise broadly similar 69EL sports twin rear single beds to go with its amidships washroom/kitchen areas and forward L-shaped lounge, the UK-only EGB gets a fabulous U-shaped lounge out back with the added, if unexpected, bonus of a pair of true travel seats therein, making this a true six-person motorhome for travel (if not for sleeping). It'll need an upgraded chassis (to 4,000kg), however, in order to carry more than two people and enough gear.

And the rear lounge really is fabulous, with its classy, restful ambient lighting, lavishly comfortable seats and top-drawer cabinetry. It may feel a little removed from the smaller lounge up front, but I suspect this sort of motorhome only ever has one of its lounges in play at any one time for a select few friends. For the purpose it's most likely to fulfil, in fact, it's spot on. And as for the L-shaped front lounge, this is almost as impressive as the rear lounge.

Less impressive is the nearside washroom, whose separate shower compartment is actually only a cylindrical affair squeezed into an already compact washroom, rather than an entirely separate area in its own right. Leaving the shower door open makes the room feel a little more spacious, but I doubt anyone much taller than 5ft 5in would be able to use the toilet if the shower was in use.

It's slightly better news in the offside kitchen, where the sight of a non-spark-ignition Cramer three-burner hob and 97-litre fridge with in-built freezer seem somewhat out of place in such a posh 'van . But the provision of twin sinks and an embarrassment of lockers and cupboards go some way to making up lost ground.