WildAx’s smallest campervan competes in a crowded sector but comes well-equipped and well-priced. Sleeping comfort and interior lighting score top marks but the sliding seat hampers access to some of the lockers and some rivals offer more storage. The Transit Custom drives extremely well and is a great alternative to Volkswagen’s T6.1. 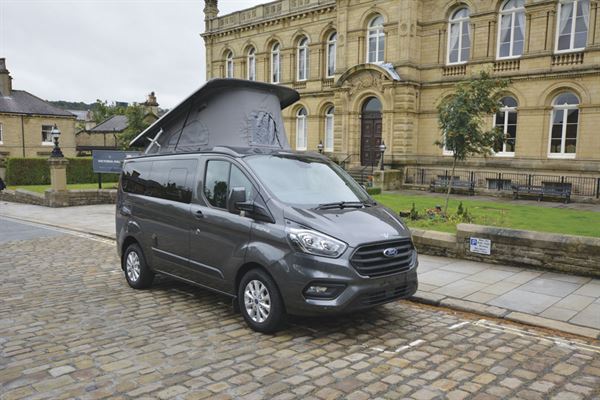 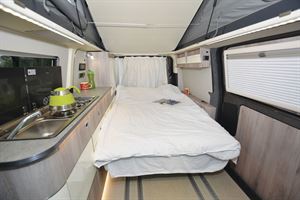 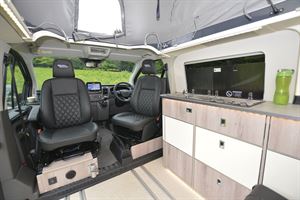 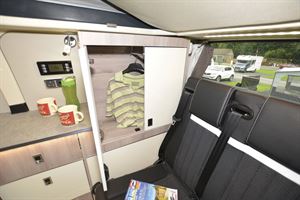 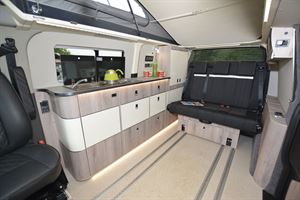 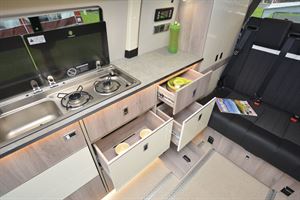 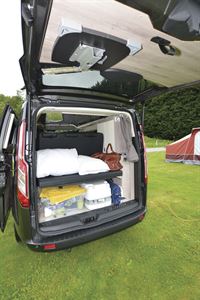 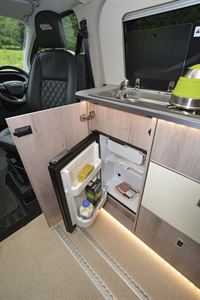 In Greek mythology, Proteus could change shape, so you could say that it’s an apt name for a pop-top camper that looks like a leisure vehicle with the roof up and much more like a people-carrier with the lid down.

This Proteus reflects a change at WildAx, too, where it becomes the smallest model in the range and the only one without any toilet/shower facilities. It’s the company’s second conversion on the popular Ford Transit Custom, following on from the long-wheelbase Triton, but this short-wheelbase camper takes on more conventional form.

With a rear bench seat that makes into a bed, a rear-hinged rising roof, and a side kitchen opposite the sliding door, the newest WildAx adopts the classic campervan floorplan.

Read more motorhome and campervan road tests and review every month in MMM, What Motorhome and Campervan magazines

We’ve liked the Ford Transit Custom since its launch in 2012 and the 2018 facelift only enhanced its appeal, especially in the cab, where a touchscreen radio display and more storage were added. The updates haven’t stopped there, with all 2019 Transit Custom engines gaining more torque (and a flagship 182bhp engine being added to the range).

This camper doesn’t boast that sort of firepower but the 128bhp (130PS) motor that WildAx specifies as standard is more than adequate and actually provides quite punchy performance with plenty of grunt low down the rev range. We can’t see many customers wanting more.

The Proteus is also based on a Trend spec van (the mid-range model, sitting between Leader and Limited).

As such, it gets a healthy level of standard spec, including a leather steering wheel, power folding and heated mirrors, cruise control, adaptive cornering front fog lamps, air-con, automatic headlights and windscreen wipers, and front and rear parking sensors. Metallic paint features in the standard price, although you will have to fork out an extra £600 for the 16in alloy wheels seen here.

I was quickly able to get comfortable behind the wheel (which feels Focus-sized), thanks to a tilt and reach-adjustable steering column, but I’d have liked to be able to get the seat a fraction lower (perhaps the swivel base is the reason).

All the controls are logical and easy to use and the six-speed manual gearbox is as good as we’ve come to expect from Ford (an automatic is available, too, if you prefer).

The ride quality is excellent and noise levels are low, so it was a shame that a loosely fitted nearside window blind impaired refinement.

Overall, the Transit Custom is a great all-rounder that won’t disappoint if you’re used to a VW T6, although it might lack some of the feeling of solidity and quality of the Volkswagen.

For some, of course, it’s also left behind in the image stakes, but it benefits from keener pricing – VW-based rivals can’t match the £50k price tag when equipped to a similar level.

In this metallic grey, with fully flush, privacy glazing and just WildAx branding to mark it out as a camper, the Proteus is a discreet daily driver that fits into car-sized parking spaces, thanks to its sub-5m length.

It quickly transforms on site by raising the roof and swivelling the front seats. Two straps secure the roof on either side, then a handle is released to raise the top.

It goes up easily, aided by gas struts, but the gap between the roof bed and the front of the roof cutaway is narrow, making the undertaking more awkward. When closed, a cloth trim panel keeps everything tidy in the cab ceiling.

Turning the cab chairs isn’t hard, although you have to ensure they are raised first, but the driver’s seat doesn’t rotate much further than 90 degrees. A lay-flat handbrake ensures that this doesn’t get in the way.

Now you start to notice some of the details of the conversion. The glazed area is quite small as both the rear side windows are panelled over on the inside. Neat frames around the windows incorporate the blinds but further reduce the view out, while ventilation is provided by small hinged sections rather than sliding panes.

Fortunately, interior lighting is excellent, with flexible wand reading lights over both cab seats and long LED strips over the kitchen, above the sliding door and by the tailgate, as well as a third reading light for the offside occupant of the rear bench.

There are mesh vent panels in either side of the pop-top, too, plus a plastic window at the front of the roof.

There’s a welcome lack of old-fashioned carpet trim on the interior, with textured board and fibreglass mouldings giving a contemporary, professional finish.

Another important aspect of a number of campervans of this ilk is a sliding seat system, adding versatility to bring rear passengers closer to those in the cab for travel, while also greatly increasing the load area behind.

WildAx uses a German Schnierle seat mounted on tracking that runs the full length of the floor. It comes with three seatbelts, a trio of height-adjustable head restraints and two Isofix points for child seats.

The rear bench is a comfortable height off the floor and has a pleasant (fixed) angle of rake on its backrest, but it will be a very tight squeeze to accommodate three here unless they are all children old enough to be out of child seats but sufficiently youthful not to be adult-sized.

Then, there’s the question of where to position the seat when camping. It’s tempting to slide it all the way back until it’s virtually touching the tailgate, freeing up a massive amount of almost ballroom-esque floor space, but you lose all your boot area, which is a vital aspect of a camper like this.

When packing up, I quickly decided this wasn’t an option, so folded the rear mattress section flat and adjusted the bench to be as far towards the rear as it would now go.

I had plenty of room in the lower area of the boot (below the mattress) for my Porta Potti and box of camping kit while, above there, was space to spare for my bedding (which wouldn’t fit anywhere else in the Proteus).

The living area in the WildAx Proteus campervan

All seemed fine until I returned through the sliding door to the main living area and found that two of the kitchen drawers (including the largest one) could not now be opened as they were blocked by the seat.

Fortunately, I later found a reasonable compromise by removing the smaller table from its mounting on the tailgate, which then allowed the seat to go a couple of centimetres further back. One drawer was still out of action and now wardrobe access was impossible, but it was more doable.

Wherever you position the seat, you’ll have to get out and open the tailgate to get either of the tables, which are stored in the boot. I couldn’t get on with the smaller table, which sits too high on its oddly placed cranked leg and seemed to threaten spilt coffee due to its wobbly nature, but the larger table is fine.

One of the displeasures of this job is tapping away on a seesawing laptop due to the nature of campervan tables. However, the free-standing table here is not only a good size for two diners but is sensibly sturdy – and with the added benefit that I could have used it outside had the weather improved.

As the sun did try to appear from behind the clouds, though, I found the Proteus felt a lot more spacious with the side door open, although I still missed having an offside rear window.

The kitchen in the WildAx Proteus campervan

With photography done, it was time to investigate the galley – and get the bacon cooking. I had enough space in the compressor fridge for my fresh food but this 40-litre unit is quite small and being hidden behind a second door restricts how far its door can open.

There’s no arguing with the fact that it looks neater like this, though, and the duo-tone wood and cream cabinets are well-finished and have smart, positive-locking catches.

Almost all of those unlatch to reveal drawers, rather than cupboards, which makes for less kneeling on the floor to find the salt or ketchup. However, some of the drawers are surprisingly small and I can’t help feeling that sliding cupboard doors (as in a VW California) would solve the access issues highlighted earlier.

Better is the amount of worktop provided, as there’s a useful expanse to the rear of the combined sink/hob unit. Then, there’s more storage in a slim drawer under the rear seat and in the wardrobe, but the latter has a drop from the rail of just 500mm, so I’d rather have shelves here to make better use of the space.

Sleeping in the WildAx Proteus campervan

The Proteus fares best at night. To make the downstairs bed, you simply slide it forward, flip over the base cushion and fold the (heavy) backrest flat.

The bed is free of lumps and ridges and, although the mattress is only 1.10m wide, the usable space between cabinets gives an extra 10cm of width.

There’s a useful corner shelf at the head of the bed (next to the wardrobe), while the nearside sleeper benefits from an unusual – and very welcome – bedside cabinet, as well as extra low and high-level storage for smaller items like socks and phone chargers.

Our test campervan had the optional leather trim, with stylish diamond stitching on the cab seats, but this does mean you sleep on a hide-covered bed. It wasn’t an issue on a cool summer night in Yorkshire, but might be less welcome in southern Spain.

More important to me was another option, the easy-to-use diesel-fired Webasto heater – at £895 this is the only essential add-on to the Proteus’ standard spec.

Blackout is achieved with concertina blinds on the side windows, silver screens for the cab and, strangely, a curtain on the tailgate. The latter needs Velcro or press studs to be added to stop it dangling over your pillows.

This littlest WildAx has another surprise in store, too. It’s not just that it’s a four-berth as standard but the comfort available up top. Jettison the ladder provided (too cumbersome) and climb up via seats and kitchen in the usual campervan fashion and you’ll find a bed that beats the lower one in both length and width.

The mattress here is only thin but Froli springs beneath ensure you’ll get a really good night’s sleep. Unusually, too, because the cab reading lights are on such long stalks, they can also serve the upstairs bedroom.