Now updated and offering the excellent nine-speed automatic gearbox from Fiat, the Solaris XL has proved its popularity over 10 years by offering families a comfortable and yet more manoeuvrable option than the usual overcab coachbuilt. It is well equipped and sturdily built, the main drawback being the rather meagre payload – easily remedied by the optional chassis upgrade, if your licence allows. 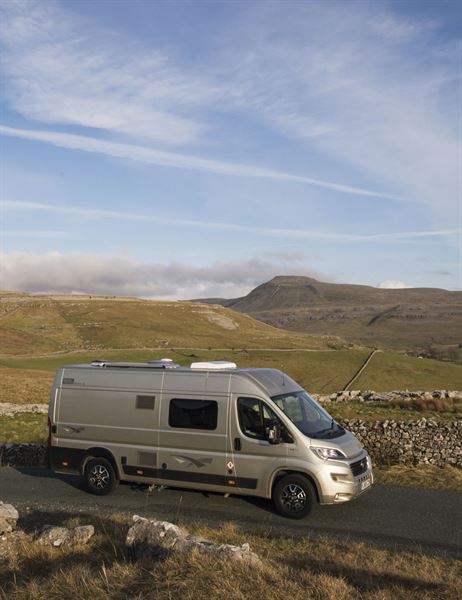 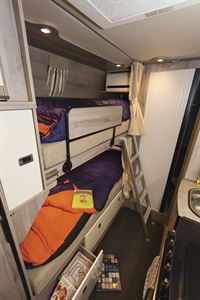 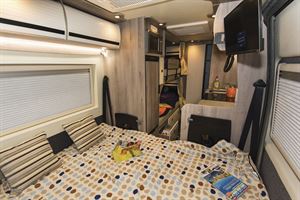 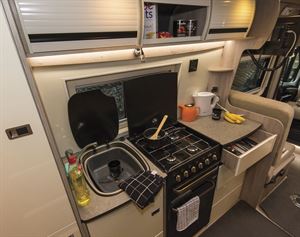 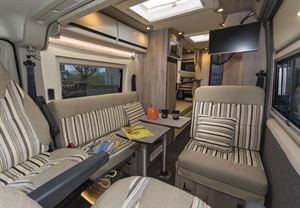 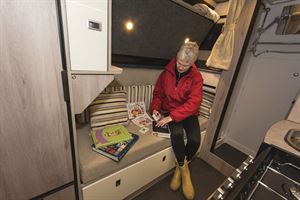 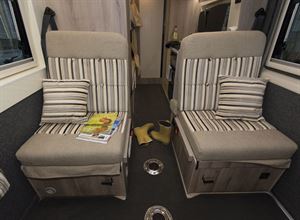 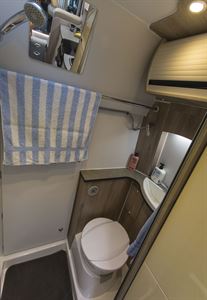 Any motorhome remaining in production for a decade, largely unmodified, must be a triumph of design. One such is the WildAx Solaris – Rona and I reviewed the prototype for MMM’s sister magazine, What Motorhome, back in 2010.

Then, the Yorkshire-based company was quite small, making around 50 campervans annually, but with big plans for expansion. Now those ambitions have been fulfilled: not only is it a much larger enterprise but it has been taken over by the French Rapido Group and will shortly move to another, bigger factory.

Unusually, WildAx converts a variety of base vehicles (now including the Renault Master, Ford Transit Custom and Mercedes Sprinter), although the mainstay has always been the Citroën Relay. However, the Solaris tested here is based on the sister Fiat Ducato, because Citroën doesn’t produce the Relay with the option of an automatic gearbox.

Yes, the Solaris is still available on the Citroën but we’re willing to bet that, henceforth, most will be ordered on the 6.36-metre Ducato, with its new nine-speed torque converter automatic transmission.

For years Fiat offered the robotised manual, six-speed, Comfort-Matic. It was very popular with motorhomers, but not a patch on a well-sorted torque-converter ’box. This new transmission places Fiat at the forefront of light commercial vehicle design, even if in most other aspects the Ducato has fallen way behind the latest Transit, Crafter and Sprinter.

The Solaris was always extremely well specified and the mod cons have been kept up-to-date. There was an underslung gas tank in 2010, but now you also get a rear-view camera, reversing sensors and an infotainment centre with sat-nav, DAB and steering wheel controls.

Externally, the Solaris is a conventional high-top van conversion with darkened side windows, unglazed back doors and restrained decals. This rather minimalist exterior is enlivened by black and silver 16in alloy wheels and a colour-coded front bumper. The side door has an automatically retracting step and a second sliding door is optionally available.

Inside, the reason for the Solaris’ enduring appeal becomes clear – this is a rare campervan in which a family of four might manage a holiday without falling out! Others can also carry two or more rear passengers but, even if there’s a roof bed, most are too cramped and lacking in storage or facilities to be a practical proposition without an awning. Four berths, a good kitchen, a proper washroom and plenty of cupboards in one camper is a rarity and key to the Solaris’ longevity.

So very familiar, the Ducato cab hardly needs description: the same acres of black plastic fascia, handbrake a stretch down to the driver’s right, a steering wheel that still only adjusts for reach and the dashboard-mounted gearstick close to the driver’s left hand.

This gearknob displayed the customary automatic arrangement of P-R-N-D (with manual control available, too), plus a mode button offering Normal, Power and Eco settings. The fascia display doesn’t show which gear you’re in and you’ll never know. There’s just constant, nearly seamless shifting and it’s best to let the ’box get on with it. On the motorway, with Eco selected, you’ll see just 1,600rpm at 70mph.

This £2,600 gearbox option seems reasonably priced and the standard 140bhp engine provides plenty of oomph but in hilly country or on winding country roads, we found it best to select Power mode. In ‘Normal’ the gearbox can be reluctant to change down.

We achieved around 30mpg, similar to what we’d expect from a manual Ducato but with a much more relaxing driving experience. Although we’re generally Luddites when it comes to automatic gearboxes, this new one is mightily impressive.

The cab also has the standard comfortable and fully adjustable swivelling seats, each with twin armrests. Then you step down into the lounge and two individual forward-facing seats that convert into a transverse double bed. Behind, on the offside, is the fridge tower, with the kitchen opposite. In the nearside rear corner is the washroom and stretching down the rear offside is a pair of bunks. These are adequate for even the lankiest teenager.

Décor is largely beige, with WildAx’s trademark silver tambour doors adorning the overhead cupboards. Overall, the ambience is relaxing, the only jarring note being the thin carpets, which looked a little drab to us, obstruct the opening of cupboard doors and tend to curl at the edges.

The lounge in the Wildax Solaris XL campervan

The lounge seats four and is formed by swivelling the cab chairs to face the rear travel seats (whose backrests can be reclined) but the cab seats need foot stools or flip-up steps. Currently, you’ll suffer from a case of ‘dangling leg syndrome’.

There are no fewer than three table pole mounts: two in the lounge floor and one between the cab seats. The two poles are stored in the wardrobe and the tabletops behind the rear travel seats. Even though the tables are small, they still obstruct movement and a free-standing table might be better here.

The offside rear seat can be flattened into a settee using a long backrest normally stored on one of the bunks, but the driver’s seat will only swivel sideways in this set-up. Open the sliding door, pull the flyscreen across to keep pesky critters at bay, and you’ll have a panoramic view of the summer sunset (perhaps).

Moreover, the base of the top bunk can be locked vertically, so junior clan members can have their own lounge, with lights in the base of the upper bunk and adjustable reading lights (as there are in the main lounge).

Everyone should be able to watch the TV on its swivelling wall-mount above the front of the kitchen.

The kitchen in the Wildax Solaris XL campervan

Catering for four requires a practical kitchen and, in most respects, the Solaris provides it in spades. The main unit has lots of work surface, a four-burner cooker with oven and separate grill, and a large sink.

Opposite, there’s a microwave (at a sensible height) over the slimline 141-litre, automatic energy selection fridge/freezer. There is loads of storage in three overhead cupboards and an open cubby alongside at the front end, plus four drawers in the right-hand side of the unit, two large cupboards to the left and a pan store in the cooker base.

There’s also a rubbish bin in the cupboard beneath the wardrobe.

Lighting is good, with two fixed lights and an adjustable one over the hob, plus more in the aisle (along with a skylight). One 12V and two mains sockets are located above the kitchen’s work surface.

Cooking and storage are well catered for but washing-up might be more of a chore as the plastic draining tray has to sit on the cooker lid and might not drain properly. However, with four sets of dirty crockery to clean most of us would probably prefer to use site facilities if possible.

At night, the children can bed down whilst the adults stay in the lounge. The bunks are quite narrow, at 65cm, but very long (over 2m) and each has its own privacy curtain (there’s none at the front for the main bed). The top bunk is reached via an alloy ladder and there’s just sufficient headroom, at 53cm, plus a removable metal safety guard. These beds are very cosy and kids will probably love them.

A nice touch is a tambour-doored locker above the foot of each bunk, where occupants could store games and treasures.

Up front, Remis cab blinds should ensure blackout, although there was quite a gap at the bottom of the windscreen in the test campervan.

The double bed is made by pulling the travel seats forward, removing a metal, H-shaped support frame from the overcab shelf and clipping it to each seat rail, then fitting the settee backrest cushion between the seats.

Like most transverse beds, this one, with its three cushion joins, might benefit from a mattress topper. It’s quite comfortable, though, and a reasonable width. As usual with this design, bed length is constrained by the sides of the ’van, at 1.84m. It’s something to try before you buy and WildAx positively encourages this by offering examples of its campervans for potential customers to hire.

The washroom in the Wildax Solaris XL campervan

Campervan washrooms can never be large without forcing too many compromises elsewhere. The Solaris is no exception but it makes a decent fist of the job of ablutions.

Dometic’s ceramic-bowl toilet feeds from the fresh water tank, with its wheeled cassette removed via the back door. The remainder of the floor is a shower tray.

Replacing the drop-down washbasin of yore, there’s a new teardrop-shaped fixed basin set in a wooden shelf. It’s deep and slightly narrow, with a swivel tap, but is quite a stretch to reach as it’s behind the toilet.

The shower controls, alongside the basin, are also rather far from the showerhead on its bracket at the opposite side of the room. And, although the plastic tambour door and overhead cupboards are impervious to water, we wonder how the rest of the furniture will cope with a frequent dowsing.

Perhaps it might be better to use the shower outside for a quick hosedown of sandy feet and dogs? There’s an inner back door, through which it’s possible to open the rear doors of the campervan, so the shower hose will reach outside.

We liked the long towel rail stretching across the back wall of the washroom, but were less enthused by the hand towel’s ring, sited too close to the toilet roll.

Storage, of course, is another fundamental for a family holiday – it’s amazing how much clothing is required with kids. Within its 3,500kg gross weight, the standard Solaris XL has only around 350kg of payload, which may be a little marginal (it allows for a driver and fuel, but no water).

Depending on the size of the passengers, care will be required when loading, which is why it is suggested that water tanks are emptied before travelling. Likewise, think before having an awning and/or bike rack fitted – unless you choose the £300 option of a chassis upgrade to 4,250kg (licence permitting). The automatic gearbox also reduces payload by 18kg.

That caveat aside, there’s plenty of storage, with space below the nearside travel seat, plus two overhead lockers and the slim overcab store. Further back, there are two wardrobes, one above the other and three large drawers under the bottom bunk. Accessed via the back doors are two small shelves at the foot of the bunks, another above the rear washroom door, and a large space under the lower bunk.

The Truma Combi 4 dual-fuel heater/boiler occupies the base of the offside travel seat and, with both water tanks insulated and heated, the Solaris is set up for all-year travel.