The clever roof bed, automotive design throughout, high-spec base vehicle and great washroom are all winning features of the Grand California. Rivals might offer more – or more practical – storage but few come close as an all-round package. Volkswagen has just created its second iconic leisure vehicle, which is sure to be a huge success with newcomers to the brand as well as T6 owners trading up. 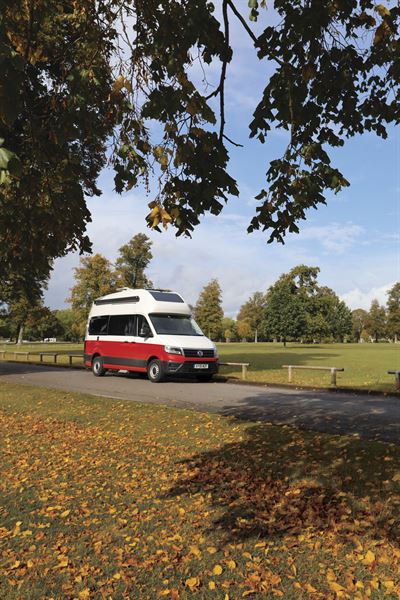 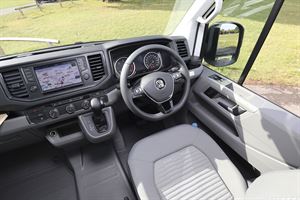 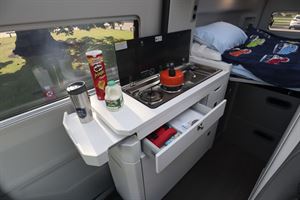 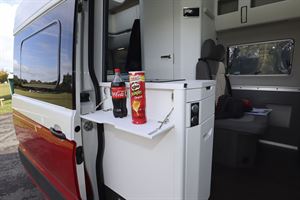 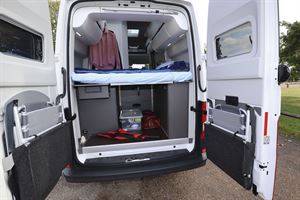 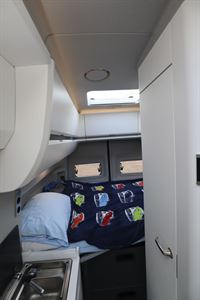 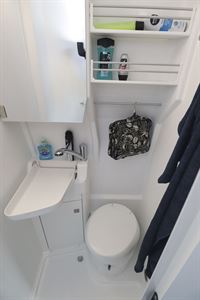 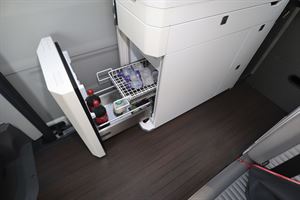 Don’t underestimate the significance of this high-top campervan. Following in the tyre tracks of the California – just launched in updated T6.1 form and the world’s best-selling campervan (175,000 vehicles and counting!) – comes its big brother. This is the only fully equipped campervan built from start to finish by a motor manufacturer.

The last time a carmaker stepped so brazenly into the motorhome world was probably in 1972 when American firm, GMC, unveiled its six-wheeler A-class, today a uniquely iconic classic in the RV world. Will the Grand California earn such affection today, let alone 30-plus years hence?

If anyone can do it, VW can. Not only has it a remarkably devoted fanbase in campervans, but the firm has developed the Grand California directly from the California XXL concept first seen – and so rapturously received – in September 2017.

Now, just over two years on, we’re driving one of the first handful of right-hand drive pre-production models and UK deliveries are promised early in the new year.

Buyers can choose from this 600 model, with or without a roof bed, and in 3,500kg or 3,880kg form (for extra payload), or the longer 680, which is only available as a two-berth and with the heavier chassis, but benefiting from a more spacious longitudinal rear bedroom.

Only the 680 can be specified with four-wheel drive. Whichever version you choose, the spec is comprehensive, especially considering the sub-£70k starting price. All models come with the same 175bhp (177PS), 2-litre TDI, Euro 6d power unit and eight-speed torque converter automatic transmission.

Before you get behind the wheel, the Grand California’s duo-tone red/white paintwork – one of four such schemes – hints at VW campers of days gone by but even T6 owners will be surprised by the equipment on offer here.

We didn’t try the optional Parktronic system, which does all the steering for you when you parallel park into a suitable space, but on an autumnal morning we were grateful for not only the three stages of seat heating but the heated leather steering wheel.

The eight-inch touchscreen display for the sat-nav, DAB radio, reversing camera and Bluetooth phone system was another feature that seemed more luxury car than van or campervan, with the next navigation instruction also appearing between the speedo and rev counter.

And the big Cali can also come with all the latest safety features (albeit some at extra cost) – blind spot warnings in the door mirrors, Hill Start Assist, City Emergency Braking, Rear Traffic Alert (to warn you of vehicles approaching from the side as you reverse), Trailer Assist, Lane Keeping Assist and, importantly for such a tall vehicle, Crosswind Assist. Cruising at the legal limit, the VW never seemed bothered by the very blustery conditions.

But then this is the nicest-driving campervan we might have ever experienced in 36 years of testing. The auto’ gearbox is as smooth as they come and has sport and manual override functions. The TDI engine is responsive and refined (backed up by a quiet conversion) and, with 410Nm of torque, it should never be found wanting. The ride is much more cosseting than a Ducato/Boxer, but without unwanted pitching or leaning and the whole experience is one that feels like a VW car – just a bigger one.

As we relaxed in the multi-adjustable driver’s seat (electric lumbar support included), we could have carried on much further than our destination near Stratford-upon-Avon, happily motoring until the diesel ran out (almost 500 miles later at the 29.6mpg we recorded).

Like the California Ocean, the Grand California takes probably the most popular layout in its class and gives it a more automotive, less ‘converted’ feel. The way the doors and walls are trimmed and the cab and living area merge tells you that this is a VW product through and through – the investment in trim mouldings alone shows that VW is serious about selling this campervan in volume.

Like the Crafter it is based upon, the Grand Cali is built in Poland, but the 600 gets a unique extra-high roof to accommodate its extra berths.

It also gets alloy wheels as standard (not fitted to the test model) and some neat detailing, such as the step that pops out when you open the sliding door (or which can be programmed to stay out on site) and the flush-fitting cassette loo servicing hatch that’s linked to the central locking.

As with the T6 Cali, the fact that the sliding door is on the offside shouldn’t hamper sales. Perhaps more importantly, the entrance comes with a two-part flyscreen and you step into a smart and spacious environment with 2.16m headroom and pale grey and white décor with contrasting yacht-style flooring. There’s also an outside serving shelf on the back of the kitchen, which can cater for al fresco TV viewing with 12V, 230V, aerial and USB sockets

The half-dinette lounge/rear fixed bed floorplan might be utterly predictable but where else would you find twin Isofix fittings on the rear seat or a neat recess in the wall alongside for your smartphone (complete with USB ports again, of course, but also an inductive charging pad)?

Even the dining table is typically Teutonic – solid, sturdy and large enough for all four diners to reach – but, while we applaud the fact that it stows away safely for travel, we can’t help thinking that there’s a better home for it than under the mattress at the rear nearside, where it’s most easily reached from outside.

Interior lighting is generally excellent, with ambient illumination in the roof and touch-to-operate, dimmable strip lights almost everywhere – except in the cab, which really needs the addition of its own on-site reading lamps.

One thing that we’ve always loved about the original California is the provision of an outdoor table and chairs as standard and it’s an idea that’s repeated here, using the same table and two chairs stored in recesses on the barn doors.

Naturally, those doors also access the large under-bed boot that you’d expect in this type of layout – 1.30m by 0.70m and 0.80m tall. Also here, on the offside, are the gas locker and inboard fresh water tank, while cupboards are fitted on the nearside but will be awkward to access with the central area full of gear.

In typical fashion, the centre section of the bed base is hinged to allow full-height storage, while removable panels at the forward end allow long loads to be carried.

All this is normal for this style of campervan and there’s an external shower fitting here as standard, as well as a neat home for the awning’s winding handle. What’s far more unusual is the look and feel of the bedroom above. For a start, the Crafter is narrower inside than a Boxer/Ducato, so there are external bulges where you might expect bedroom windows. Outside, they’re barely noticeable but inside they allow a surprisingly roomy bed with a generous 1.93m length.

It’s a comfortable place to slumber, too, as the mattress sits on flexible plastic springs. There’s a big rooflight above and more USB ports, as well as plenty of lighting, but the U-shaped array of top lockers make it impossible to comfortably sit up in bed.

Those cupboards are a bit of a signature feature. They look fabulous, with a seamless run of white furniture and top and bottom sections, each with hinges that feel as if they’ll last an eternity, but they’re not as capacious as you might hope.

If there’s style over practicality in the back bedroom, the overcab bed is pure design genius. Press a button and the bed slides back over the lounge, with a simple flip-over cushion on the nearside to extend length here from 1.60m to 1.90m.

Even better, the access ladder has wide treads, so feels more like a staircase, and there’s a panoramic wind-up sunroof above.

The kitchen in the Grand California 600

On the offside, jutting across the doorway, the Grand California’s kitchen is, in some ways, anything but grand. With no microwave, oven or grill, even as options, it will be a deal-breaker for some but, for those trading up from a T6, it will be business as usual. The two-burner hob and integral sink are just as you’d get in a baby Cali.

What’s pleasing is that VW has tried to provide a bit of extra worktop, firstly with a slide-out extension at the forward end of the galley and, secondly, with a pop-up-and-out panel that lies on top of the bed.

But the drawer-style compressor fridge is really impressive, being easy to access from inside or outside when you just want to lean in for another beer. And its capacity appears to be much greater than the stated 70 litres.

However, the cooler does rather dominate, leaving a limited amount of low-level storage in the galley (it’s an area that’s bettered by the 680 model). There’s just a wide cutlery/utensil drawer and two further drawers under the sink. Fortunately, these are deeper than they look and either would accommodate our small set of stackable pans. Non-perishable foods will have to go in one of the upper cupboards, over the end of the bed.

The washroom in the Grand California 600

Also seeming bigger in use than it appears is the washroom, which is finished entirely in white. A novel touch here is the lack of a light switch – instead, a motion sensor turns on the LEDs as you enter, which can be a bit of a shock if you’re stumbling in, half asleep, at 3am.

Inside, it’s a true wet room with a proper wipe-clean vibe throughout. There’s headroom of up to 2.10m and no shortage of leg or shoulder-space when you’re sat on the usual Thetford swivel cassette toilet (fitted with an optional SOG venting system). Plenty of storage is on offer, both behind the washroom mirror and on open-but-fiddle-railed shelves. Four towel hooks sit in a row but these may double up for wet coats, especially as there’s no wardrobe, just a rail for a few garments over the foot of the bed.

Hot water and heating come from a gas/electric Truma Combi, operated via VW’s own simple touchscreen control panel by the washroom door. There’s 110 litres of fresh water on board, too – ideal for off-grid camping.

The backless, fold-away basin might divide opinion (it’s solidly made, though, and fine for handwashing) but the shower was a pleasant surprise. With no need for a curtain and plenty of space, we'd rather have a shower in a Grand Cali than in the vast majority of its rivals.

That VW has got details like this right, first time out, is very impressive. We knew the Grand Cali would drive well – the Crafter is the best base vehicle, bar none – and we knew that it would be well equipped, just like its little brother, but it’s only minor stuff like the fiddly windscreen blind that needs more development (hopefully cab blinds will come).