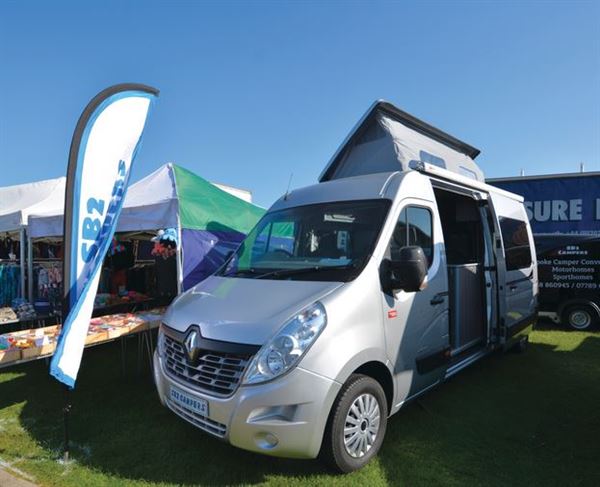 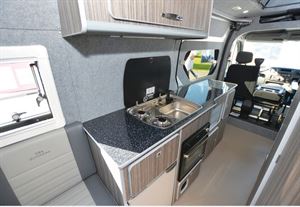 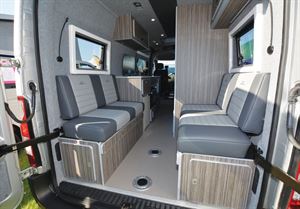 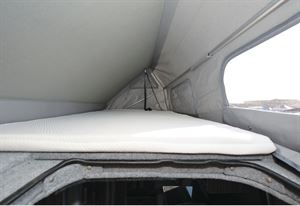 Steve and Sal Bundock run SB2 Campers, but the Renault Master conversion seen here is one that they built for their own use with their two children. Although the company makes standard side kitchen pop-top campervans, like the VW T6.1 that was parked alongside on its stand at the National Motorhome & Campervan Show, the more bespoke nature of this one-off design is actually more typical of SB2’s output.

The couple first enjoyed campervanning with a Commer that they bought in 1989 but began their conversion business eight years ago. The Renault is their latest design, although they have previously converted other large panel vans, such as the Fiat Ducato, Mercedes Sprinter and VW Crafter.

This is the first time that SB2 has worked on a Master, a van that is less commonly seen in the campervan market but offers similar interior space to a Fiat Ducato, along with a more absorbent ride and a reputation for good fuel economy. The pre-owned panel van here has the dCi 125 engine and six-speed manual gearbox.

Aside from the more unusual choice of van, the first thing that you’re likely to notice about this silver camper is the side-hinged rising-roof, supplied by PopTop Roofs. It’s not there to increase headroom but to provide a bedroom for one of the Bundocks’ children. Climb up the telescopic ladder and you’ll find a roof bed measuring 1.78m by 1.00m.

As this camper has been designed for family use, it needs four travel seats. In the cab, there’s a single driver’s seat with armrest and a double passenger seat (with the centre pew’s backrest folding down when not required, for use as a table or to enable a scramble through to the living area). Behind the cab, SB2 has added an extra original Renault seat for the fourth member of the family – an arrangement that looks good for passenger comfort, but it’s a shame that the converter has, as yet, been unable to source a swivel mechanism for the double cab seat, which would greatly increase the versatility of the layout on site. However, parents may see it as a bonus that (squabbling) kids are not sat together!

This being a campervan of over six metres in length, there’s room for a second seating area in the stern. Here, two side-facing benches provide on-site relaxation space. This is the dining area, too, with the table dropping into the aisle to convert the lounge into a bedroom. It’s not a large bed, though, at 1.73m by 1.15m – fortunately, Steve and Sal are not big people, but a Ducato’s greater interior width would allow a longer bed.

Where the SB2 conversion scores instead is the size of its galley, which is a vast 1.94m from end to end. Towards the front of the campervan, there’s a huge uninterrupted worktop, with the combined two-burner hob and sink unit mounted away from potential draughts from an open sliding door. Then, there’s yet more worktop aft of the cooker. This kitchen isn’t just about preparation space; it also includes a Thetford Duplex oven/grill, a Cookworks microwave and a 75-litre Vitrifrigo compressor fridge.

Opposite, the washroom has plenty of room to use the cassette loo and shower but there’s no basin in here. But then this is a bespoke build and SB2 will tailor your campervan to your requirements.

A conversion like this on your own van would cost £27,500 including VAT and the pop-top and Fiamma awning. The interior is all carpet lined and all the cavities are insulated. There’s a Truma Combi gas/electric heating system and Sargent motorhome electrics. It comes with an 80-litre underslung fresh water tank, with room to add a gas tank underneath, too. All the gas systems are safety tested and certificated prior to sale.