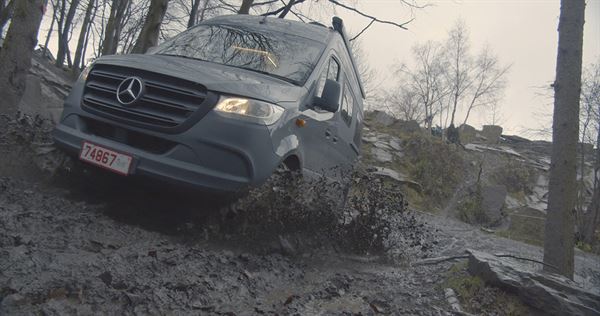 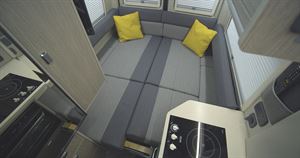 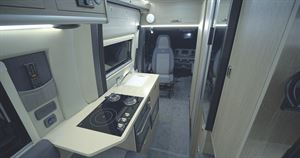 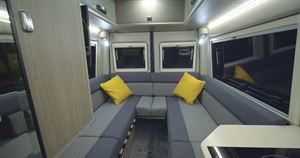 Honestly, I did tell him. I knew he was too close. This wasn’t just a puddle, more of a lake.

It was December, in Yorkshire, and the weather had been wintry, to say the least. We were at Parkwood Off Road Centre, near Bradford, where the conditions are meant to be, err, challenging. But he didn’t listen. Hey, I’m just a magazine man and he (Martin Tempest, videographer and camera man) wanted THE shot.

Well, as you can see, he got the image he desired. But he also got sprayed, showered and utterly soaked in brown, gloopy sludge. And so did his camera. He seemed more pleased about the picture, once he’d wiped mud off the viewing screen, than worried about the equipment. He stood there, dripping wet but happy, and looking at him, like something out of a Tom and Jerry cartoon, it was hard not to laugh. Sorry, Martin.

Then he asked me to do it again. And again, just to be sure. To drive, not gingerly, but foot hard down like Elfyn Evans on a World Rally Championship special stage, through the brown lake.

The Tenorite Grey metallic paintwork of this luxury motorhome was being restyled in the same poo-coloured yuckiness as we raced through the gloop, sending muck not just over cameras and cameraman but three metres in the air, or at least as tall as this £100k campervan.

It was the culmination of a day that I won’t forget in a hurry – and you can see the results on YouTube, here:


It had started at silly o’clock with an espresso and a drive up the A1, arriving at Parkwood before it was properly light on this mid-winter’s day. Soon, Steve Young, boss of RP Motorhomes, pulled alongside our Ducato campervan in his immaculate, just finished, Rebel Overlander. “Look after it”, he said, and off he went with wife, Jaye, to Ikea.

Crikey, how do you take care of someone else’s brand-new, luxury motorhome and, at the same time, fulfil a brief to show on video what it’s capable of on terrain that was, at the very same time, being used by champion trials riders on motorbikes that looked a lot more suitable for these conditions than a Mercedes Sprinter weighing over three tonnes and measuring nearly three metres in height?

It’s a long way up into this Merc – you certainly notice the increased ground clearance of the 165mm taller 4x4 campervan when getting in and the grab handles are as essential to haul yourself up as the alarm had been to get me out of bed – but, once on board, it’s not the workmanlike experience you might expect.

There’s the MBUX display with sat-nav, voice activation, reversing camera, DAB radio, etc, and driving is simplicity itself. Press a button to start the 163bhp engine, another to engage four-wheel drive and a third to engage low range. Then, it’s another switch to release the parking brake – only my fingers are getting a workout – and we’re off. Very, very slowly.

In normal use, the Sprinter 4x4 remains rear-wheel drive but that button sends 35% of the power to the front wheels. Instead of using mechanical differential locks, the Merc’s all-wheel-drive works using the Electronic Traction System, 4ETS. If one or more wheels lose traction, this automatically brakes the spinning wheels with short impulses, thus increasing the drive to the wheels with good grip.

Not only that, but the Adaptive ESP increases safety off road, as well as on. Recognising the vehicle’s high centre of gravity, it regulates its behaviour, especially important when large tilt angles could otherwise pose a serious hazard.

There’s a super-smooth seven-speed automatic transmission, too, and all these sophisticated electronics are mated to 17in Black Rhino alloy wheels (choose from six different designs) and BF Goodrich All-Terrain tyres – not for form but function. As anyone who’s dabbled in off-roading will know, having the right rubber is essential.

Even looking at their chunky tread pattern, though, I’m faced with some hard facts. In places the conditions are so greasy that I’m finding it hard to stand up in my Anatom walking boots. And the Rebel isn’t a diminutive little Jeep or pared-to-the-bone Land Rover. It’s a full-sized motorhome. With a shower. And it’s not mine.

Edging between rocks, through a stream and up a steep bank, I take it gently. Really gently. But gradually, as I get braver, Martin’s demands for the video become, well, more demanding, so my confidence grows.

In the end, I’m going places that no motorhome should go. Up slopes more slippery than a politician on the ropes and, eventually, through that lake, and it seems as if this Rebel is unstoppable. Whatever surface we show it, those BF Goodrichs seem to find grip and we just go.

And, while Martin looks like he’s had an unfortunate accident with a muck spreader, I’m sitting on a part-leather seat that’s as supportive as you’d find in a sports car (complete with extendable, tiltable squab), heater on full and enjoying every minute. It’s only as daylight disappears that I realise I’m not just here to have fun but also to review RP’s latest model. I’m in awe of its 4x4 capabilities, but what about the rest of the Rebel?

Read every campervan and motorhome review published in What Motorhome since 2012 by using our new digital content library. To get started, use the search bar below, type what you're looking for, and enjoy:

In the past, if you wanted your holidays to start where the roads end, you might have bought something based on a Land Rover Defender, with little more in the way of creature comforts than a tent. Or a proper adventure truck based on a Unimog, requiring a lottery win to fund. But the remarkable thing about the Rebel is that, once you’ve let the sliding door glide closed electrically behind you, you’re in a conventional – and superbly appointed – rear lounge motorhome.

There are 1.90m and 1.78m-long settees aft, retaining access through the rear doors but, cleverly, you can slide out the rearmost sections of bed base on either side and convert the seating into a more sprawlable U-shape – without employing additional cushions.

Windows all around are covered by posh pleated blinds, there’s a plethora of interior lights and, despite the fact that furniture overhangs the settees on each side (wardrobe offside, kitchen counter nearside), there’s still plenty of room to put your feet up, or to use the sofas as single beds.

There’s plenty of space here to dine, too, with a large island leg table that stores behind the driver’s seat. Making a huge lengthways double bed is simply a matter of sliding the slatted bed bases and the squab cushions out, then dropping in the backrests behind.

Leaving the cushions attached to the back doors gives you a comfortable support for sitting up in bed, perfect if you want to watch the 22in TV mounted on the side of the wardrobe. Or listen to tunes on the separate radio mounted back here instead.

You’ll be toasty at night, thanks to the diesel-fired Truma Combi with 6kW output and the option to use mains power when hooked up. This underused version of the popular heater reduces your reliance on bottled gas, fitting in well with the escape-off-the-beaten-track vibe of this campervan.

It’s installed in the offside settee base, where you’ll also find the 90-litre inboard fresh water tank – that leaves the nearside locker free for bedding, etc. The seat frames are easy to raise on gas struts and looking under the sofas reveals the sort of attention to detail that’s become an RP trademark, with bespoke mouldings covering the rear wheelarches.

This isn’t your average campervan kitchen, either. Corian worktops set the tone and there’s plenty of room to prepare your meals, while the Thetford cooker includes an induction ring as well as twin gas burners, and there’s also a Duplex combined oven and grill. A low-level microwave is installed here, too, but not at the cost of all your storage.

Large top lockers are fitted all around the rear lounge, there are soft-closing drawers in the galley, a 90-litre compressor fridge opposite and then three more useful drawers below that.

With a large overcab cupboard, too, there should be plenty of storage for most couples but, since our test, RP has also worked on external storage. The new roof rack and ladder option not only includes rooftop stowage but the ladder slides away under the campervan in its own compartment, a feature made possible by the 4x4’s exceptional ground clearance.

Practicalities continue inside with a deep kitchen sink, domestic-style plumbing and a reversible chopping board cover. Then, there’s the washroom, which of course becomes a whole lot more important if you’re intending to camp far from any crowds, madding or otherwise.

RP has increased the dimensions of the bathroom in the latest Rebel so it’s a good-sized space for a sub-six-metre model. There’s a bench cassette toilet, more Corian worktop around the basin and under the window, and even a lockable medicine cabinet.

Best of all, when showering, you don’t have to deploy a clingy curtain – a bifold shower screen covers the door and a second blind protects the window blind. The showerhead can be attached to the wall wherever suits, via a suction cap – now that really is attention to detail.

Prices for the Overlander start north of £100k, so you should expect a rather special vehicle. The quality is top-notch and there’s certainly no shortage of spec, including a 15-litre LPG tank, which shouldn’t need a refill until the next Ice Age as gas is not required by the fridge or the heater. Then, there’s the 110Ah lithium battery as standard, plus the Victron MultiPlus inverter.

Of course, at this level, there’s also the possibility of personalising your ’van with a full leather interior, electrical upgrades for extra off-grid capability, air suspension, satellite TV, and the powerful V6 engine.

At the end of the day, I reluctantly handed back the keys to the muddy (but thankfully unharmed) Rebel, dreaming of exploring Iceland or Morocco in just such a beast. Martin, on the other hand, just wanted to get home for a shower…