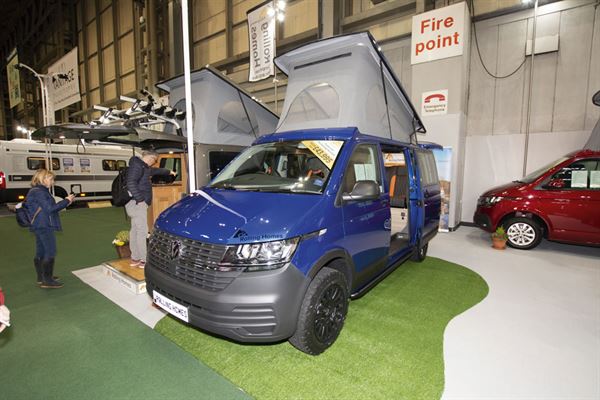 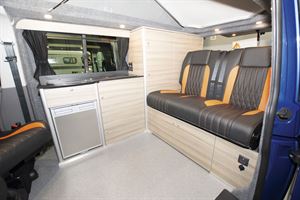 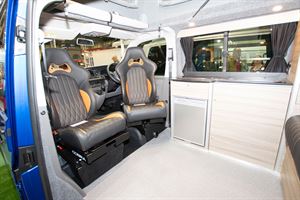 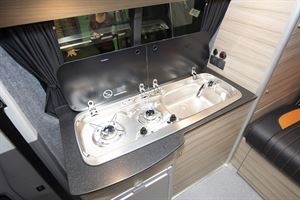 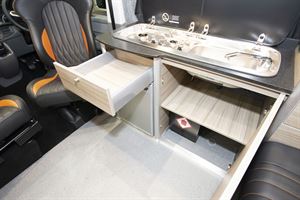 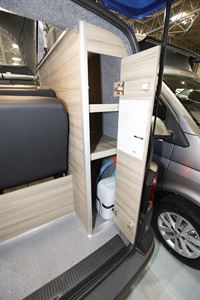 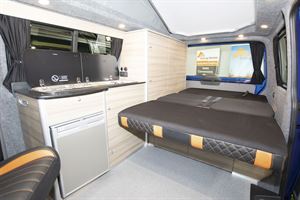 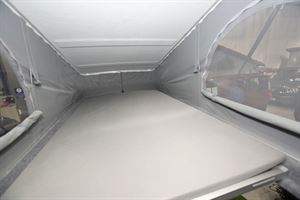 Mark Cooper, boss of Rolling Homes, is always one to push the boundaries where VW campers are concerned and, as a keen off-road enthusiast, the Expedition has been developed not just to look tough on the school run but be seriously capable when Tarmac runs out and your route turns to mud, snow or sand.

Originally launched at last October’s NEC show, the second example of this specialist campervan is the first on the new T6.1 base vehicle, while paring back the spec a little has reduced the total price by £13k. As shown, this camper is priced at £66,218.

The starting point for the Expedition is, of course, a four-wheel drive VW Transporter – or, to be precise, a T32 Highline 4Motion with 150PS engine and six-speed manual gearbox. To that, a differential lock and underbody protection (designed and manufactured in-house) are added, as well as Bilstein lift suspension.

The wheels are OZ alloys from Italy with 17in diameter – a smaller rim allowing a deeper off-road tyre to be fitted. The wheel and tyre package here is priced at £1,820. In its quest for off-road ability, Rolling Homes even mounts the Webasto diesel heater inboard, so when your camper is wading across a stream up to its axles you won’t ruin it.

Inside, the Expedition still has a classic side kitchen layout and, although the previous example had a completely wash-down interior, this one goes for a standard woodgrain furniture in handmade lightweight board (plain-coloured cabinets are also available). Worktops are in Corian, reflecting Mark’s previous experience building high-end domestic kitchens. It’s an NCC-approved conversion and has European Whole Vehicle Type Approval, too.

The most striking aspect of the design is in the cab where your eyes are drawn to the Cobra seats with carbon-fibre shells. They’re pricey, at nearly £3,000, but we’ve never seen such figure-hugging chairs in a VW campervan before.

In contrast, the rear RIB bench seat/bed unit is almost an anti-climax even though it’s been trimmed in striking black and orange leather (that’s another £2k on the bill).

Another proven product fitted here is the SCA Deluxe elevating roof with roof bed. It’s approved by both VW and the German TÜV authorities.

The side kitchen features a Dometic combination hob/sink unit with split glass lid. As a shelved wardrobe is sited alongside the rear seat, worktop space is lacking when both appliances are in use, but storage benefits from the increased section of tall furniture.

Wardrobe space is particularly generous and stretches right down to the floor, while more full-height storage is available in the end of the unit, reached through the tailgate. The fresh water container is located here at floor level.

Back in the main galley you’ll find a 50-litre compressor fridge with good-sized, soft-closing drawer above. Then, alongside, is a large shelved locker with this space also including the gas compartment. There’s more storage under the rear seat, too, with double doors providing easy access. A portable toilet can slide away here.

The Expedition is fully insulated using sheep’s wool and comes with a 75Ah leisure battery and ultra-low power consumption LED lighting. A 100W solar panel and additional 230V and USB sockets featured on this show model.

The Expedition comes with a three-year warranty on the conversion, while the VW Transporter base vehicle is also covered for three years. If you’re planning to travel to Iceland (the land of fire and ice), rather than pop to Iceland (the land of frozen food), this could be the camper for you, offering a lot more living space than a Land Rover, with a lot less cost (and bulk) than a Mercedes Sprinter 4x4.