That the Pegaso motorhome is, currently, the only UK-handed, mainstream A-class is, alone, a reason to buy. It’s also very well equipped as standard, and features a capable lounge and big beds. 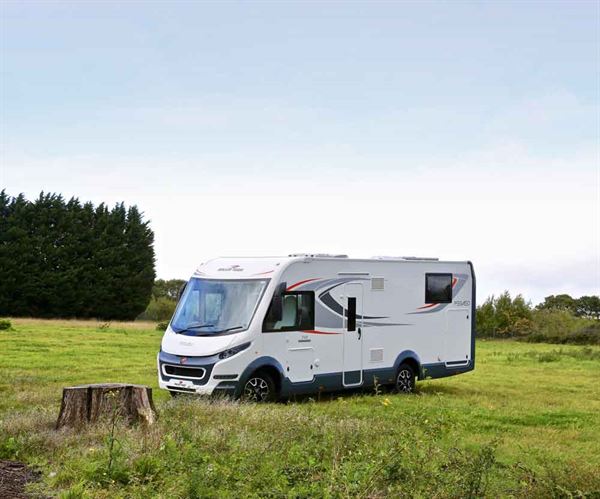 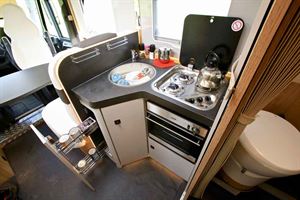 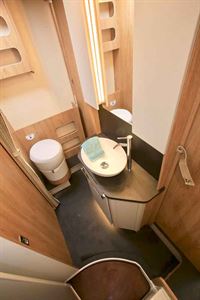 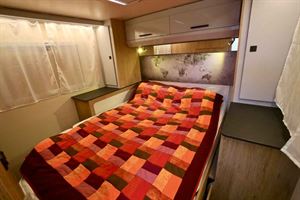 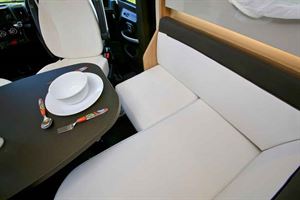 I’m at Auto-Trail, not in Italy, for this test. Grimsby-based Auto-Trail is a very British company, producing a very British range of coachbuilts and panel van conversions. But it’s owned by French leisure giant, Trigano, and also acts as importer for the Roller Team range of motorhomes.

Whether it’s Auto-Trail’s influence, or just good business sense on the part of Trigano, I know not, but unlike the vast majority of continental imports, all Roller Teams are UK-handed.

Except that, last year, when the Pegaso 740 was launched as the marque’s first A-class in the UK, its habitation and cab doors remained on the continental side. Maybe Trigano was testing the water to see how well it sold. Well, it was obviously a success because now the habitation door has migrated. The cab door has been shifted, too – next to the steering wheel, allowing the driver to get in and out without the need to slide across the cab or go aft to emerge via the habitation door.

The Pegaso’s external design is up-to-date, displaying all the styling notes of a modern, entry-level A-class, with its expected acreage of white broken up to good effect by a grey grille and road lights surrounds, plus similarly hued skirts.

The wheeltrims do a reasonable job of imitating alloys, but without the attendant cost. Daytime running lights and tail-lights are LED and there’s a four-bike rack on the back. Finally, look up and you can spot the standard-fit 120W solar panel.

The habitation door is fitted with a window and a couple of shelves on its inside, so it’s far from basic spec. However, there’s no external step, so it’s a little bit of a stretch to get in, and noticeably further down to the ground than you might expect when leaving.

With white walls, white upper lockers and kitchen cabinet fronts and mostly white upholstery, the lounge and kitchen areas are noticeably bright. There are benefits, as the faux leather is wipe-clean, so red wine can be allowed on board and even consumed by clumsy me.

The driving department is furnished with a pair of captain’s seats – very stylish, multi-adjustable and with desirable built-in belts. And, instead of the usual ISRI or Aguti, these are branded FASP. They proved both supportive and comfortable.

The very well-equipped cab features electric mirrors, electric window for the cab door, air-conditioning, cruise control, Traction+, reversing camera with a dedicated monitor and a radio with TomTom sat-nav leave little else to be desired. And, added for this season, are steering wheel-mounted radio and hands-free controls.

Another significant addition is the fact that the whole Roller Team range is due to gain NCC (National Caravan Council) approval.

The Pegaso proved easy to drive, the mirrors worked extremely well and the reversing camera was a boon for someone who’s bad at going backwards! The bane of A-class drivers – direct sunlight coming through the big windscreen – is well controlled by a large blind that proved easy to operate.

The designers at Roller Team have made a pretty good job of things in the lounge. The side section of the L-shaped sofa is wide enough to not be accused of being a mere perch and the rest are generous and comfortable enough. As usual, the swivelled cab seats are the best in the house and face the TV bracket, which is mounted just inside the habitation door.

The table is big and positioned well enough for the five folks that might reasonably sit here to dine. It can be slid out of the way when through progress is needed.

Lighting seems good and, apart from a rectangular fitting mounted on the underside of the drop-down bed, there’s a considerable length of LED strip, mounted just about everywhere (including beneath the drop-down bed and under and over lockers).

The Pegaso has a Thetford Duplex, a combined oven/grill that’s big enough to tackle a roast, but not so big that it’ll take over lots of kitchen space. Though, what’s left for cutlery is just a little plastic tray in the adjacent triangular cupboard.

I’d prefer a smaller fridge and some drawers in the galley but, if your motorhoming life has to include baking and roasting, you may well accept the lack of drawers as a sacrifice worth making. On a brighter note, there is good locker space above, a slim, pull-out larder and a big cupboard above the fridge.

Working surface is reasonably versatile, thanks to a divided, drop-in sink cover and, next door, the stylish Can three-burner hob.

The washbasin is centrally mounted on a transverse wall that helps separate the bedroom from the bathroom, along with a sliding door on each side. Another sliding door separates the washroom from the rest of the living area.

Washroom floor space is good, and so is storage – sensibly sized cupboards, plus pigeonhole shelving. Space is compromised in the otherwise roomy shower by the intrusion of a wheelarch, while opposite, the same can be said for the (new-model) toilet. Here the compromise is height from the floor – there’s too much of it for comfortable sitting. A footrest is needed.

The island bed is big, and, unlike many, there’s hardly any narrowing or radiusing to the bed at the foot. You should not wake up in the night to find one leg hanging out in the cold.

The aforementioned bed is height-adjustable, so a large locker becomes a garage using a handle operated through one of the two external doors.

The foot of the bed is home to the Truma Combi boiler and it’s the more powerful model, running on gas and/or mains power when hooked up.

With its 3,500kg maximum weight chassis, anyone with a car licence can drive but, at this weight, payload is quite low.

Thankfully, a chassis upgrade is available (to 3,650kg), but then check your licence to make sure you are legal to drive it.

If you enjoyed this review, you can read the full version and more in the December 2017 issue of MMM magazine.