The pedigree of N+B in the liner sector is, perhaps, unrivalled and few dealers come close to Travelworld’s experience at this end of the market. Expect your Flair to cost north of £200k but tailor its specification and décor to your taste and needs and it’ll be years before you want to change it. This is the standard by which other liners should be judged. 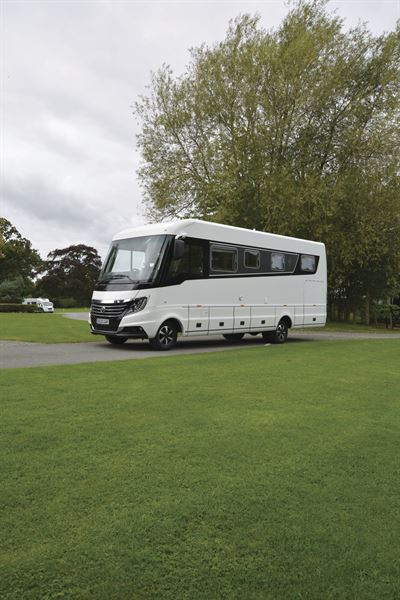 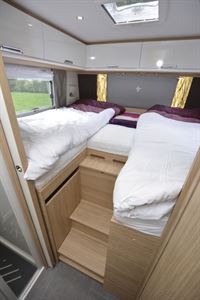 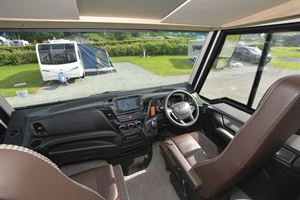 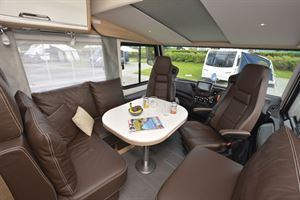 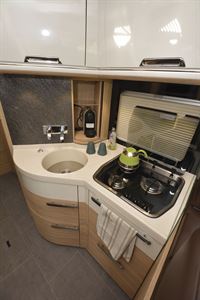 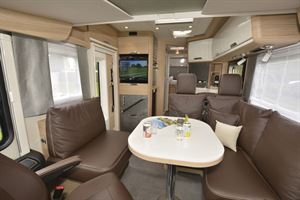 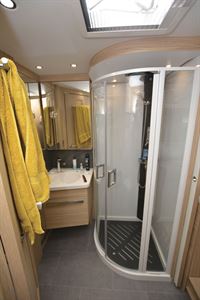 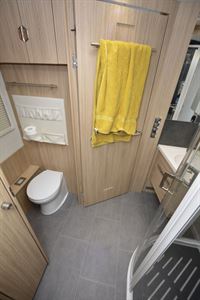 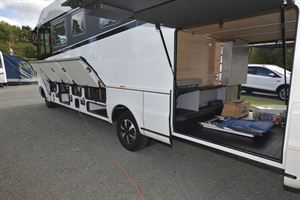 The entrance seemed grander than I remembered, but the sign did say ‘Oxon Hall’ and the Alpine sat-nav was adamant I was in the right place. Quickly, I realised I wasn’t and that a motorhome measuring 2.39m wide and 8.30m long was going to be a very tight fit between two brick pillars.

Thankfully, we emerged unscathed and soon found the excellent Oxon Hall Touring Park, rather than the hall itself.

Other than the inevitable fallibility of navigating by postcode, it also highlighted that I had already become remarkably at ease driving this £213k liner motorhome, despite only having climbed aboard via the double electric step and its only door (on the offside) an hour so earlier.

This is actually the ‘baby’ of the Flair range. However, it’s not the length that matters, but the fact that driver vision is so good.

You don’t sit as remotely from the sides or, more especially, the nose as in many A-classes and the reversing camera’s display on the sat-nav’s 9in screen and the twin-lens coach mirrors make manoeuvring easy, aided by the slick ZF eight-speed automatic transmission.

It’s just as well that the N+B flagship is not daunting as I left Travelworld’s fancy showroom straight into roadworks and narrow lanes on the M6.

Sitting almost at the truckers’ level, enjoying the luxury of SKA captain’s chairs that even have extendable, tilting squabs, it was immediately clear that this is not just another motorhome.

The rear air suspension (a £5,375 option) ensures stability that I’ve found lacking in other Iveco-based models and the 205bhp engine (£2,255 extra), combined with that superb £4,385 gearbox option, meant I was soon able to waft past the 18-wheelers when the national speed limit signs appeared.

Once parked up on my super pitch and levelled by simply pressing a button to adjust the rear suspension, it was obvious that the Flair towers above ‘ordinary’ caravans and motorhomes.

That height not only gives you a commanding view of your surroundings, but a degree of privacy once the lower cab screen, which pulls up from the dashboard, is raised (there’s also a shop blind-style roller shutter that motors down from above for full blackout).

Don’t be surprised if you’re the centre of attention on site, though, with phones appearing to capture your grand home from home.

It’s a little bit like going to Tesco in a Lamborghini and, like the Lambo, the Flair costs as much as a three bed semi local to our test venue in Shrewsbury.

That’s partly because ‘our’ Niesmann had over £50,000 worth of factory options fitted, plus a further array added by Travelworld, including two smart TVs, the essential alarm and tracker systems and an on-board Motorhome WiFi system.

That not only allowed the TVs to access streaming services but also enabled me to keep in touch on the move.

Options and packs on the Niesmann+Bischoff Flair 830 LE motorhome

We haven’t got room to list all the additional spec in this review, but key are the various packs.

The Comfort Pack (£1,810) adds a larger rooflight, Froli bed springs and upgrades to the kitchen; the Liner Pack (£2,715) includes the aluminium windscreen blind, double-glazed cab side windows, SKA cab seats, microfibre headlining, which is soft to the touch, and habitation windows with useful one-handle opening; the Dynamic Pack (£3,080) adds two additional 150Ah leisure batteries and a 3kW inverter (or there’s a Lithium Energy Pack instead, if you prefer).

If you’re fortunate enough to be spending at that level, the Flair will not disappoint. Right from the outset, this is clearly a special vehicle and Niesmann+Bischoff’s distinctive styling doesn’t appear to have dated at all since we first saw it in 2013.

Under the skin, though, the top-of-the-range model was redeveloped in 2018 to improve safety. The only liner-class motorhome to have been crash tested, it gained ESP, seatbelt pre-tensioners, a pedal release system (to reduce the risk of leg injuries) and lighter, stronger seat bases.

Now, for 2021, there are optional electronic safety systems on the Iveco chassis.

Whether you opt for subtle or striking, the most impressive part of the exterior is the smooth run of coach-style exterior locker doors, all neatly integrated into the skirts on either side and each opening smoothly on gas struts.

The central locking system (£995), operated by remote control or from a dashboard switch, caters for not just the habitation door but the garage and skirt hatches, too.

On the offside, you’ll discover the gas locker (here with twin Gas It refillable cylinders) and the Truma Saphir habitation air-conditioning unit (so much better for weight distribution than a roof-mounted system).

Then, going from front to rear along the nearside, are the vehicle battery and fuel filler, full-width underfloor storage (330mm deep), all the water drain taps and the pump and, finally, the toilet tank and some more storage.

The mains hook-up lead goes up through the floor of the water services locker, so there’s no interruption to insulation and no cheap plastic exterior flap. The water tanks are also in the double floor, positioned just forward of the rear axle and cleaned via the only internal hatch in the floor.

Of course, capacities are generous – 370 litres fresh and 250 litres grey – while 1¼in diameter plumbing ensures swift discharge and a mains water connection is possible on site.

The big numbers continue with the garage, which can carry up to 500kg and has an internal height of 1.38m, as well as (optionally) two full-sized loading doors and an external shower.

All the extras here add weight (almost 500kg), as well as cost, but on a 7,490kg chassis it’s almost an irrelevance. Payload is more than a tonne and a half, even with all this kit, while the Iveco can tow up to 3,300kg.

Interior furnishings in the the Niesmann+Bischoff Flair 830 LE motorhome

There are plenty of bigger motorhomes than this, even some British coachbuilts on tag-axle Fiat chassis, but few come close to the Flair’s opulence or bespoke feel.

You can choose from Classic Line or lighter Modern Line furniture with the Verade Oak furniture seen here, six different seat base cushions, four locker door fronts, 12 backrest cushions and two splashback finishes. With so much choice it’s unlikely that you’ll ever see another Flair like yours.

This 830 LE may be the smallest model, but it shows few signs of being compromised by that. There are longer layouts, up to 9.27m, if you want more space, while some floorplans benefit from a larger lounge or a grander galley.

All have a flat floor right through the living area from dashboard to rear bed(s) and all are designed for all-season use, with thick Styrofoam insulation and domestic-style Alde warm water heating, complete with separate temperature controls in the bedroom.

The front lounge here isn’t the biggest, but try it before you decide you need more room. A couple can fully rotate the captain’s chairs and recline, feet up on the sofas to watch the 24in TV adjacent to the entrance.

Alternatively, four can dine around the expanding table (featuring a central pop-up infill section) with space to spare.

The SKA seats are as luxurious on site as they are for travel, while the soft, almost pillow-like backs on the settees (called Kiss, or you can have the buttoned Cloud cushions instead) increase comfort immeasurably over the usual blocky backrests.

But it’s not just about looks, or luxury, as practical details include the height-adjustable upper seatbelt mountings and the hinged seat bases for easy access to the lockers below.

There’s a shoe locker just inside the door, too, as well as surround sound for the TV through the Alpine head unit, while the chocolate-coloured real leather is double-stitched with impeccable finish and feel.

Despite the Flair’s relatively low production volumes (and N+B’s insistence that numbers are increased slowly, so as not to jeopardise quality), a ‘UK kitchen’ is offered – and fitted to most models sold here.

It replaces the usual tall fridge and Tec-Tower oven with a more modest (106-litre) cooler with a large oven/grill above (at the ideal height) and a microwave on top of that. It does mean the Siemens food-nuker is a lofty 1.67m off the floor but few German motorhome galleys come so well appointed.

Opposite, the angled galley unit isn’t huge, but the mineral worktop with integral drainer is like a high-end domestic installation and the pull-out tap is mounted on the wall, rather than the counter.

Of course, there’s an optional Krups coffee machine, too, a three-burner hob with cast iron pan stands, plus five huge soft-closing drawers that are locked for travel at the flick of a switch. This smallest Flair is the only one that cannot be ordered with a dishwasher.

If there’s one aspect of this motorhome where you realise you’ve stepped up from the realms of the luxury A-class into the liner category, perhaps it’s the washroom.

Here, the usual cassette toilet is replaced by a Jabsco marine unit with 130-litre black tank (£1,155 option) for greater freedom from site facilities and a more domestic feel.

The shower, with real glass doors, is as big – and as stylish – as you’d get in an apartment and, while water pressure might not be up to power shower levels, the combination of handheld and rain shower fittings ensure you start the day fresh.

Of course, the toilet door (with its inset illuminated reed feature) swings across to close off the en suite and an equally bank vault-like sliding panel closes off the bedroom beyond.

The washroom, shower and bedroom in the Niesmann+Bischoff Flair 830 LE motorhome

A mineral washbasin and Black Star Shale splashback completes this most luxurious en suite. The only omissions are a floor-to-ceiling mirror to check your outfit and a larger wardrobe to stow designer names.

If it’s folded clothing that you’re storing there won’t be any such problem. As well as the six lockers above the rear single beds, there’s the cleverest of slide-out drawer units hidden under the foot of each bed.

Push the steps to the bed left or right and 'his and her' cabinets appear as if from nowhere!

The rear beds are as comfortable as any I’ve slept on in boutique hotels, let alone other motorhomes.

Their Tencel mattresses sit on Froli plastic springs and the Alde heating runs right around the three sides of the bedroom. A TV at the foot of the bed, as well as leather pouches for books or tablets, suggest lazy mornings; there’s not enough room to fully sit up under those overhead lockers, but that wouldn’t stop me spending my lottery winnings right here.

Erwin Hymer Centre Travelworld and the Edwards family has been serving the Motorhome community in the UK one way or another for over 40 years. This area has been created to share our purpose, vision and values and the company's rich history and achievements