The K-Silver is built to a price some £8,000 less than its established K-Yacht siblings, which come very highly specified as standard. Many of the missing features would be available as dealer-fit options, so you’d need to price up your wishlist to compare. 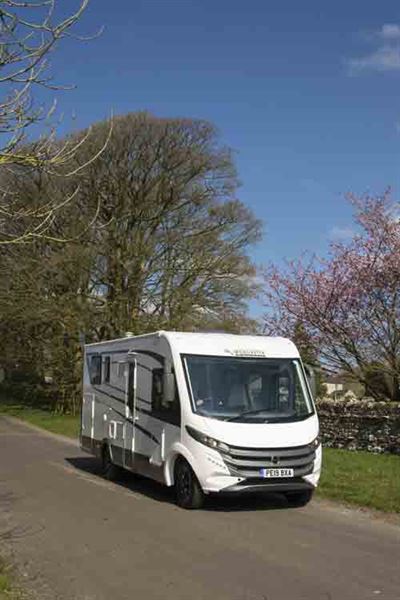 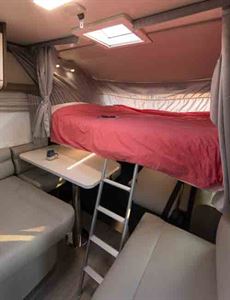 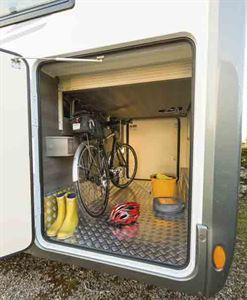 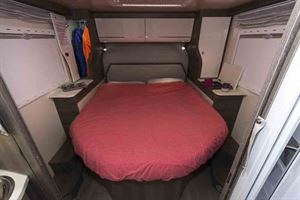 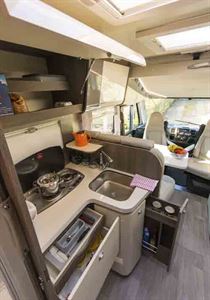 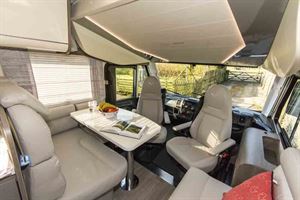 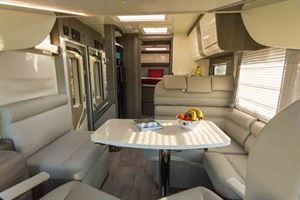 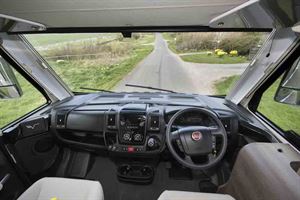 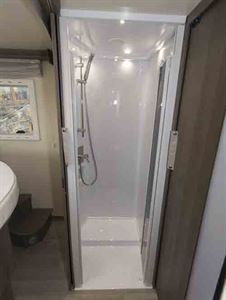 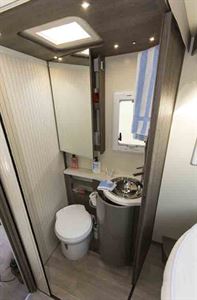 The K-Silver i 59 is one of two models in Mobilvetta’s entry-level A-class range (there’s also an i 56 with twin beds), the intention being to tempt customers who might choose a higher-spec low-profile into becoming proud A-class owners instead.

When we tested the K-Yacht i 80, then newly introduced to the British market via Marquis, the sole UK importer, we were very impressed. At £64,995 (launch price), it was a highly competitive, well-designed motorhome. Subsequently, the brand has thrived but K-Yachts have increased in price, so the K-Silvers now cover the sub-£70k sector instead.

This K-Silver i 59 has the classic A-class layout of a drop-down bed over the cab, a front lounge, an island bed in the rear, with split washroom facilities and the kitchen in between. External differences between this new K-Silver i 59 and its nearest K-Yacht sibling, the i 79, are barely noticeable and guess what? The launch price of the newcomer is £64,995.

So, do we review this new model alone, or as a comparison with the established K-Yacht, now selling for £8,000 more? A bit of both, the burning questions being: how desirable is the K-Silver in its own right and would it be better to ‘push the boat out’ (sorry!) for a K-Yacht?

Obviously a Mobilvetta, the K-Silver has a similarly sleek nose, related but paler graphics and the same coach-type mirrors as the K-Yacht (though grey, not white). Dimensions are almost identical; the K-Yacht i 79 is 7.44m long, while the K-Silver is 7.40m, and both are 2.35m wide.

The same materials, insulation and construction methods are used: wood-free structure with double-skinned GRP bodywork throughout and aluminium skirts, confidently enabling the same five-year water ingress warranty to be offered.

What is noticeable is the position of the K-Silver’s doors. Like the majority of A-classes, they’re continentally handed, with a cab door for the passenger and an offside habitation door. By contrast, the latest-model K-Yachts are set up for the UK with the layouts completely mirrored.

The K-Silver has no rear parking sensors, nor reversing camera and, as they’re not factory options, you’ll need to arrange their fitting by your dealer. The only factory-installed option available is the Comfort-Matic robotised gearbox. This approach makes sense, as Marquis can bulk order the K-Silver in standard specification, keeping the price down and speeding up delivery.

Like other Mobilvettas, the K-Silver is based on Fiat’s Ducato, here using the Light Camping-Car chassis with the desirable 3,500kg gross weight, thereby drivable on everyman’s licence. But this means a rather marginal 340kg payload (reducing to 323kg with the Comfort-Matic gearbox). However, this figure includes 50 litres of fresh water, whereas most rivals’ calculations use only 20 litres.

The K-Silver’s 2.3-litre engine provides 130bhp, whereas the K-Yacht has the 150bhp motor as standard. And the K-Silver’s cabin lacks the upmarket Media Centre of the K-Yacht, having no sat-nav, DAB radio or even CD player (for us techno-laggers!). However, cruise control, air-con and twin airbags are there, together with Traction Plus, ESP and Hill Assist, so a comprehensive list.

The panoramic windscreen is the essence of A-class motoring, and the K-Silver has two UK-handed wipers.

Forward visibility is brilliant, although the lack of a rear view camera was nerve-wracking and the large coach-type mirrors did create a blindspot at junctions/roundabouts.

The K-Silver handled fine for a large motorhome and its reasonably supple suspension ensured internal rattles were relatively subdued.

Road noise was evident and, while many people are fans, we found the Aguti captain’s chairs somewhat firm and flat.

Entering through the offside habitation door, the first internal step (of two) is quite high (40cm). Fortunately, there’s a grab handle to your left, with a large mirror above and a magazine/umbrella pocket below. All that’s missing is some coat hooks. The door has a window and full flyscreen and is connected to the remote central locking.

The modern internal décor has glossy cream cupboard doors, Comfort Grey eco-leather upholstery and cool mid-brown woodwork. Continental-style Roman fabric blinds adorn lounge and bedroom windows and, while there are full blinds to all windows, only the cab’s are pleated.

The front part of the lounge ceiling is the base of the drop-down bed, with elegant LED edging strips.

There’s a central light, too, plus a medium-sized Heki towards the kitchen, although we noted that cab seat reading lights are not fitted.

The fixed-base, centrally positioned table is reachable from every seat, yet its large top doesn’t obstruct access and moves in all directions.

A lounge with seating for five

The lounge is quite spacious, with seating for five. We found the dinette seats upright, but TV-watching will be from the cab seats anyway, as the multi-adjustable TV bracket extends from above the fridge.

There’s no aerial, just the sockets, and no extra audio speakers in lounge or bedroom – further evidence that the K-Silver is built to a price.

A tried and tested kitchen

The L-shaped kitchen is a tried-and-tested design that works well and the in-line three-burner hob set at the back leaves ample working space at the front.

The sink has a removable partial cover, functioning as extra worktop – turn it over and it’s a chopping board, clip it to a rail above and you have a shelf – clever!

There’s a basket shelf on the side wall for condiments, but nowhere to hang your tea towel.

Kitchen storage, however, is excellent, with a large shelved overhead cupboard, two deep soft-close drawers below the hob (one containing an inner cutlery drawer), a shelved cupboard with curved door under the sink and a slide-out unit alongside.

Illumination comes from an LED strip under the top cupboard. Opposite the kitchen unit, the glossy black fridge tower contains a 150-litre AES fridge, separate freezer and an oven/grill above.

The only thing to note here is that the small, elegant push-buttons on all the drawers were prone to catching and breaking our fingernails!

Rearwards from the kitchen, behind a sliding door, the washroom is to the offside, the shower cubicle to the nearside. Beyond the ablutions, sliding wooden screens meet, so this area can be used as one.

The washroom also has a tambour door, connecting with the sliding screens, and the shower has double smoked doors, so each can be entirely separate from the other, the main living area and the bedroom.

The washroom has the usual Thetford C263 swivel toilet using water from the main tank. It has plenty of elbow and legroom and is at a reasonable height. The circular stainless-steel washbasin is quite large, though its non-swivelling tap obstructs slightly when washing.

There’s a large cupboard below the basin, another on the wall alongside the window (both shelved) and generous cubbies behind the toilet but there’s a paucity of hooks and nowhere for more as the tambour door occupies the wall space.

The shower has easy-clean smooth plastic-lined walls and there’s one drain hole, though there is moulding for another and there’s no soap dish, just a cubby for shampoo.

The ceiling has LED lights around the edge and a ceiling vent – although we felt a skylight (as in the washroom) would allow the fitting of a drop-down rail for towels/wet clothes.

An island bed that can be raised

Beyond the washroom, the bedroom displays its keynote island bed. Unlike many, the bed’s head section can’t be raised to shorten the bed but there is space – an 18cm gap – to move around it.

The K-Silver’s bed has a manual raising mechanism, operated from within the garage via a winding handle. This lifts the bed by 20cm, giving greater space for storage below. It’s not the easiest to wind, as you need to be in the garage.

The frame and mattress can be raised at the bed’s foot to access storage below. There is no gas strut or stay to hold it, so it’s a two-person operation. There’s a wardrobe either side of the bed and a surface for mugs and books, the tops opening to reveal cubbies for bits and pieces.

There’s a Heki and a light in the ceiling, reading lights above the bed and a 12V socket and aerial point for a television above the offside window, although there is no solid wall available to hold a TV bracket.

A drop-down bed above the cab

Like most A-classes, the K-Silver uses the space above the cab for a drop-down bed. It pulls down easily once the cab seats have been tipped forward. It’s low enough to hop up from the lounge seat and there is an alloy ladder. The bed is comfortable (like the rear bed, the base is slatted), has two reading lights at the nearside – and you could watch TV from here!

Storage is good throughout; the main location being the rear garage, which has a modest payload of 120kg

Doors on either side both measure 1.16m wide by 1.06m high and, with the island bed lowered, there’s 87cm headroom and 107cm with the bed raised, which is tall enough for a bike. There’s a light in the garage, but no tying points.

Inside there’s a small high-level cupboard over the nearside lounge and, on the offside wall, a slim shelf with fabric pocket below.

The offside seat has plenty of storage beneath (shared with the leisure battery), but space below the travel seat is filled by the 120-litre fresh water tank.

There are two floor cubbies, one quite shallow, but the other set up for six bottles of wine. Most sensible!

Regarding standard equipment, the K-Silver meets expectations for its place in the market.

So the Truma Combi blown-air heater/boiler is the 4kW version and is gas-powered only and, unsurprisingly, the K-Yacht’s desirable electric underfloor heating is absent.

If you found this motorhome review from MMM magazine useful, you can read more model reviews here.

Click here to download a digital issue of MMM magazine and here if you'd prefer What Motorhome magazine.