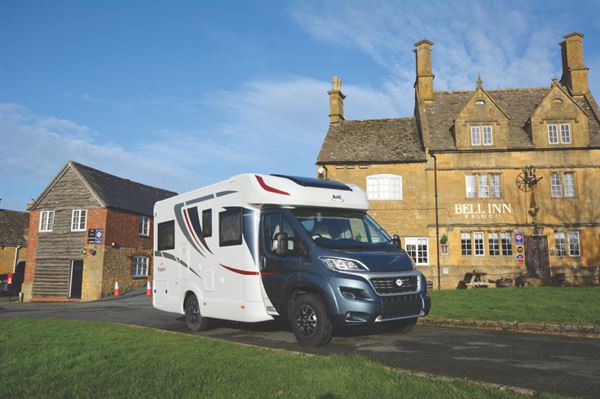 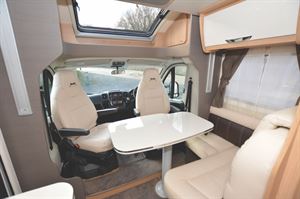 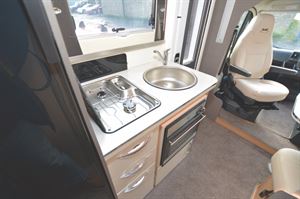 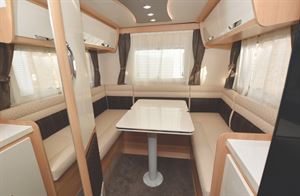 Motorhomes with a front and rear lounge tend to be on the large side, typically around 7.5m long. You wouldn’t expect to get two lounge areas into a compact model, would you?

But what if you’ve settled on needing two seating areas, so that the kids can have some space of their own, even though you haven’t got a lot of room on the drive? Or you want to downsize from a bigger model to something more manoeuvrable, without changing to a different layout?

Well, McLouis might have the answer because its latest Fusion model looks like it could become a UK favourite – and it’s only 6.49m long.

Despite being shorter than every single one of its competitors, though, the new Fusion 330 still has family touring potential with four seatbelts and four berths, including two electric drop-down beds!

On the outside, the newcomer (like all 2021-season McLouis) comes with a metallic grey cab and enhanced graphics. The base vehicle is a Fiat Ducato with lowered camper chassis and the 140bhp engine. Standard kit includes cruise control, cab air-conditioning, driver and passenger airbags, ESP, Traction+ and Hill Descent Control.

There’s even a DAB radio with Bluetooth, sat-nav, reversing camera and steering wheel-mounted switches, though the helm itself is plastic rather than leather and there are no fancy chrome trims for the instruments.

This is not the entry-level product that you might have expected of this once budget brand, as you can see from the flush, framed habitation windows, the big overcab Skydome sunroof and 16in alloy wheels. The McLouis importer, Auto-Sleepers, sees it as a rival to dealer special editions based on popular Elddis and Swift vehicles.

Like those British-built motorhomes, the Fusion has its habitation door (with flyscreen, waste bin, window and central locking) on the UK nearside. There’s no external step here, but two small steps inside lead to the living area.

Read lots more McLouis Fusion motorhome reviews – plus those from other major manufacturers – in the What Motorhome digital content library. It's fully searchable, so you can find reviews of a particular make and model easily. To get started, type 'McLouis' in the search bar below, and the results will bring up reviews from years of recent issues:

Before we go inside, though, we should discuss one aspect where the Italian motorhome beats most of the English opposition hands down – external storage.

With loading doors on either side, the Fusion has a generous locker under its rear lounge. This space runs the full width of the motorhome and measures 560mm high, with a width of between 550mm and 880mm. Tie-downs are provided to secure heavier items and there’s a light on the nearside. For a motorhome without a fixed bed, it’s a big plus.

It’s inside that this new sixth layout in the range – the first without a permanent bed – makes its mark, though. It has a half-dinette/L-settee lounge up front, giving space for two rear travel seats, while a very Anglophile U-shaped lounge fills the rear.

In between, the galley lives on the nearside, with wardrobe and washroom opposite. In format it couldn’t be more British but its design is more compact and its décor (including a new duo-tone upholstery with quilted effect) adds a bit of European flair.

Up front, there’s a slight step down from the cab to the half-dinette but comfort doesn’t seem to be impaired, unless you’re short in the leg.

However, space between the table and the travel seat’s backrest is very tight (as little as 330mm) unless you pull the table (permanently mounted on a centre post) away from the wall. That’s something to check carefully if you need to fit child seats here.

For dining, there’s just enough room to get four people sat around the table, as long as those on the L-settee aren’t too large. It may not be a big seating space but it does feel nice and light, thanks to the cab sunroof and the window in the door.

Aft of the entrance, the galley does seem quite petite for a family motorhome but it’s not without its star features. A 142-litre Thetford fridge with automatic energy selection is a very welcome surprise (and better than you’d get in a much longer Elddis Autoquest 196, for example) and an extractor fan is another feature that you wouldn’t expect.

There’s no escaping the fact that this is a very small kitchen, though, and when the lid is raised on the hob there’s no worktop to speak of. You’ll have to do your food prep on one of the tables instead.

The hob has just two burners but a Duplex combined oven/grill is fitted, too, and it’s sensibly positioned. The kitchen also includes three drawers (the bottom one very deep) and they soft close with a genuinely high-quality feel.

Opposite, you step up into a washroom which has plenty of pluses – good storage, an opening window, worktop around the basin and bifold doors to create a shower cubicle (with duckboard and twin drains). The shower isn’t the biggest and access is a bit tight but it’s great to find a proper wet area, rather than a clingy curtain.

It’s the rear lounge that will be the main selling point of the 330, though. The settees are firm but comfortable and it’s a better space for relaxing in than the front lounge, although you could dine here, too, at a fixed table that twists, slides and folds. There’s just enough room to put your feet up, especially on the nearside where the sofa is longer (at 1.47m). A TV bracket is fitted, too.

At night, the settee across the back wall becomes a single bed (2.16m by 0.60m), while a drop-down double bed lowers from the ceiling above. This is the main bed (1.90m by 1.35m) and it comes with a roof vent and reading lights. You’ll need to use the ladder to access it, though, as it’s 1.52m off the floor.

The fourth berth is a drop-down single (electric again) above the front dinette. This bed measures 1.90m by 0.82m but, once it’s down, you’ll have to limbo to get in or out of the motorhome as headroom beneath the bed is only 1.28m.

So, here is a more compact version of a very popular layout, featuring an unusual set of sleeping arrangements. Build quality seems impressive and the spec and exterior storage are top-notch, too, but obviously there are compromises in packing this floorplan into an overall length of just 6.49m.