There are two aspects of this Malibu Charming GT that give it an advantage over its many rivals – a feeling of top-notch build quality and, more especially, the clever ‘two rooms’ design with its generous shower and well-designed changing area. It also seems to have more, or better-planned, storage than some competitors, although the lack of an oven will be a demerit for keen cooks. 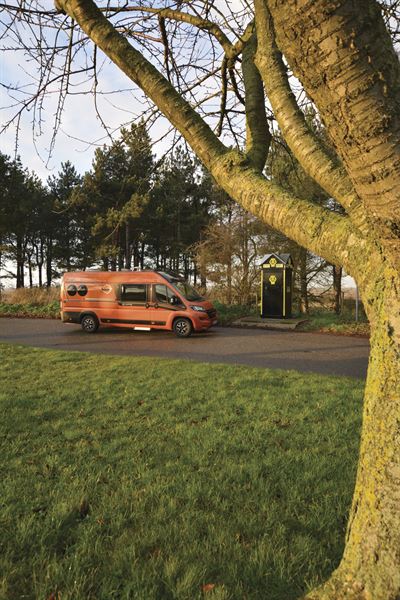 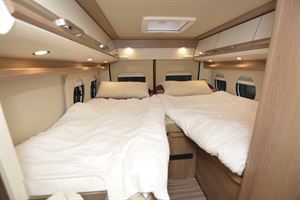 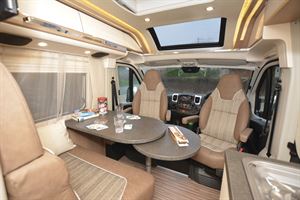 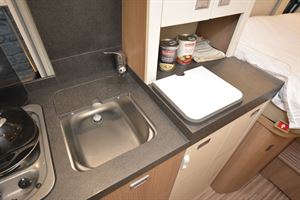 Malibu now offers low-profile and A-class motorhomes but is, perhaps, best known for its Van range. After all, the first Malibu was a VW campervan, way back in 1979.

These days, it’s an extensive range of fixed bed Fiat Ducatos that make up the portfolio and, while the grille proudly wears the Malibu name, the branding on the side is underscored with ‘a company of Carthago’.

With its Skyview sunroof, alloy wheels, bold Batic Orange paint and those trademark porthole windows on either side of the rear bedroom, it looked the part, but the story here is more about the inside. The brochure refers to this new 640 LE RB model as ‘first class – two rooms’, the key feature being a new room divider to separate off the bedroom.

Confusingly, though, you can have the standard version or the higher-spec Charming, which, in turn, comes in either Coupé (with full-height walk-through into the cab) or GT spec (with the cab skylight).

Then, there’s the Family-for-4 (available in all three spec levels), which is the same campervan but with the addition of a pop-top.

Suffice to say that the Charming GT gets a dose of extra style on the outside (including the alloys) and upgraded lighting on the inside – if two berths are enough, it’s the one you’ll want.

Orange paint aside (10 other colours are available), this might look like a number of other extra-long Fiat van conversions, especially from behind the wheel, where the hard plastics and decade-old design let the side down. A few aspects, however, lift this particular Malibu above the norm, the most important being the nine-speed automatic transmission.

This is the second season of this gearbox being offered and it impressed from the off, but a longer test this time of a few hundred miles really showed how transformative it is in the Ducato driving experience. Combined here with the 160bhp engine (120 horses are standard), the Fiat feels a lot more sophisticated than in manual form, with just the right amount of performance for every occasion.

As we’ve long come to expect, stability and surefooted behaviour are in the mix, but, for once, so too is a lack of rattles and clatter from the living area.

Enjoying this campervan review? You can catch up with all the motorhome and campervan reviews published in MMM since January 2012 using our new digitial content archive. To take a look, just type whatever you're looking for - for example, Malibu - into the search bar below:

The engine and gearbox add nearly £6k to the cost here, but that’s just the start. The Chassis Package (£2,645) is essential as it includes everything from cab air-con and cruise control to rear parking sensors and passenger seat height adjustment. Then there’s the further upgrade to automatic air-con, at £410, and the addition of a Pioneer DAB radio with 6in touchscreen and sat-nav (£1,195).

However, the most interesting addition here is the Driver’s Assistance Package (£1,375). As well as electrically folding mirrors, automatic lights and wipers, tyre pressure sensors and automatic emergency braking, this adds traffic sign recognition (this displays speed limits, etc, on the dash) and a Lane Departure Warning Assistant, which emits audible and visual alerts if you stray over the white lines without indicating.

If you’re used to these features on your car you might want them on your camper, but this option does seem pricey.

It’s not just the paint that’s bright here. Inside, it’s possible to light up the interior like a summer’s day, even with the windscreen covered in snow and the sky a dull grey.

Had this test been in summer sun, we’d have enjoyed its rays coming in through the Remis rooflight and the overcab Skyview, the latter a fixed, double-glazed plastic window that’s very neatly integrated but not as big as some.

Interior and furnishing in the Malibu Van Charming campervan

Of course, one of the joys of these latest campervans is the ability to walk through from cab to living area and vice versa without stooping, while also benefiting from a much greater feeling of space in what is, inevitably, quite a compact lounge.

The LED strips integrated into the ceiling are also particularly neat here, while the cupboards on either side of the sunroof are so much more useful than the usual open shelves.

In fact, you barely have to do more than step aboard to start to be impressed by this Malibu. The Cherry Style furniture is one of two options for Charming models, while the Palermo upholstery, with stain protection, is one of 13 variations (including full or part leather). Both cost extra, but it’s not the décor, rather the finish, that’s noteworthy.

The furniture is screwed together, as well as morticed, which is probably why it doesn’t rattle and feels built to last. The sprung hinges and positive-locking catches of the top lockers look like those found in a Carthago A-class at double this camper’s cost, while the padded ceiling is another classy touch. Then there are the rear speakers, concertina-type blinds, automotive-style trim panels, etc.

The lounge is a half-dinette with wall-mounted table and swivel cab seats. The table is easy to slide fore and aft, but less so to remove and stow because half its leg is a permanent fixture. The floor here hides a useful storage compartment under a hinged lid but, even better, is the huge drawer (with bin bag holder alongside) that slides out from under the bench. Access to even more under-seat space is simple via a hinged lid.

Another neat touch is that the heating and general controls above the door are concealed behind an opaque panel, so their lights don’t disturb you at night.

There’s no full-height furniture on the offside, to give a through view that opens up the feeling of space. That means no tall wardrobe or fridge and, in fact, the chilled food department is at the forward end of the galley, facing front.

Here, the 84-litre compressor fridge is easily accessible when you’re outside, even though this isn’t one of those new-fangled coolers with the door that opens from either side.

Above the fridge is a two-burner hob and alongside that is a stainless-steel sink with split, flush-fitting cover. Removing just one section of the lid leaves a modicum of worktop. Because of the fridge, there is no extension to the kitchen surface at the forward end. Instead, at fractionally higher level, the worktop continues aft of the sink.

Above this area of countertop is a shelved cupboard that’s ideal for cups, bowls, etc, while under the sink are three reasonably deep drawers – it’s just a pity that none of them has dividers for cutlery and utensils.

The galley spec is similar to most continental campervans, a few of which offer an oven. Here, you have to ask yourself if you can live without.

In coachbuilts, it’s become virtually de rigueur to offer a division to create two rooms – a lounge/diner and galley, then an en suite bedroom to the rear. In campervans that arrangement is much less common, although Dreamer’s clever Modul’Space washroom is one solution that’s been on the market for several years.

Malibu already has one novelty in its washroom – a cassette toilet that slides away to create more floorspace for showering. That system is deployed here, but the new ‘two room concept’ takes things a stage further.

Quite simply, the toilet door opens out across the aisle and locks into a catch on the cupboards opposite. Then a panel hinges around from the toilet door to completely separate the two halves of the campervan. It’s hardly a new idea (Auto-Sleepers did something similar 30-plus years ago), but it’s well executed and probably unique in this type of floorplan. What it does do is create a completely private bedroom with a generous changing area (although, the washroom light switch is the wrong side of the division!).

A further innovation is that the section of wall next to the open washroom door folds to create an even more open feeling.

Then there are twin wardrobes – one very slim one under the end of the kitchen, with a shelved locker alongside, and a second much more generous one beneath the foot of the offside bed (hanging rail 510mm long, drop 770mm) that has both a front door and top access via a hinged section of bed base.

Back in the washroom itself, there’s plenty of room to use the loo when it’s been pulled out of its hidey hole, but the fact that it flexes when you sit on it is not very reassuring. Much better is the way a tambour door covers the basin, with another protecting the door, thus creating what must surely be one of the best shower cubicles currently available in this size of campervan.

A neat moulded shelf is provided for shampoo, etc, but there are no hooks or rails for towels and the showerhead’s bracket seems ill-placed, so you’ll end up holding it. Nevertheless, here is a spacious shower that you could use regularly, without ever having to rely on campsite facilities, and you step out into your own private dressing area.

Of course, the second room includes the (very comfortable) beds, as well as the ablutions, and here that means single mattresses of differing sizes. The offside bed is longer and, whilst our measurements show the nearside one being wider (because that’s how the mattresses are split), there is actually no physical divide between the beds, which share the full 1.88m width of the campervan.

Berths and beds in the Malibu Van Charming campervan

Equally, although the beds are designed as singles, there’s nothing to stop you using them as a transverse double (1.88m by 1.27m) if you prefer.

Sleeping lengthways has one big advantage, though, and that’s that you can sit up in bed to read. Not only that, but there are neat little shelves at the head of each berth for your specs.

Those super-stylish porthole windows provide ventilation, in addition to the small rooflight, but the lighting is switched per side (four spots each), which might be a bit much when you’ve just woken up (pity there’s no dimmer).

A child’s bed made from the front dinette is optional (£265) and requires additional cushions, while another alternative is the aforementioned Family-for-4’s pop-top (a 2021-season novelty) at an extra £3,530.

As important, in a way, as the bedroom itself is the storage it provides. In the Malibu, fixed furniture on the nearside houses the gas locker and Combi boiler, while lifting the hinged bed base reveals a useful ‘secret’ compartment.

On the nearside, the fresh water tank is built in, leaving a large central boot area that’s automatically lit when you open the back doors. This area measures 1.29m by 0.93m with a height of 0.88m.

If you want to get bikes on board, then both beds can be hinged to the side (the offside one held up with a strap) and the step at the front of the bedroom can be removed.