This Malibu A-class is a sturdily built motorhome with lots of storage and, more unusually, the payload to match when built on the heavier (4,250kg) Fiat chassis. However, more space in the lounge, and extra worktop space in the kitchen would be appreciated. The bedroom is really the star feature, but be careful with the options list or you may push the price over £100k. 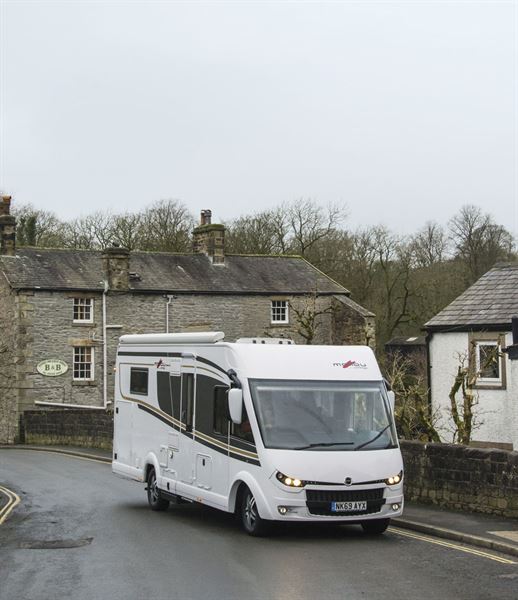 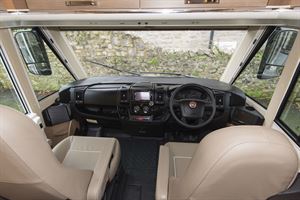 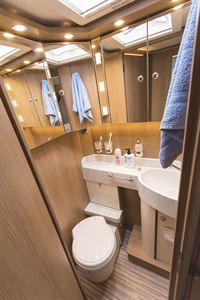 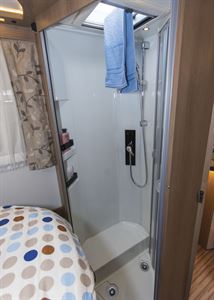 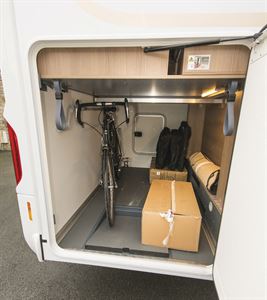 The name Malibu brings to mind a famous Californian resort, or an equally memorable Caribbean drink. In 1979 it was also the name chosen by Karl-Heinz Schuler for his first VW pop-top campervan, under the Carthago label.

Malibus sold by the thousand in Europe, but Carthago gradually became known for its premium A-class motorhomes, with campervans taking a back seat before being dropped altogether in 2001.

With the expanding campervan market too promising to ignore, the Malibu name returned as a sub-brand. At a slightly lower price than Carthago but retaining the company’s ethos of top-quality, Fiat Ducato panel vans were chosen rather than the previous VW Transporters. The new venture’s success prompted an extension of the Malibu range into low-profile coachbuilts and A-classes, one of which we collected from Tyne Valley.

The I 500 QB (‘I’ for integrated, ‘QB’ for queen’s bed) measures 7.48m by 2.27m wide; so it’s a medium/large motorhome, if slightly narrower than the norm. A smart-looking beast, the smoothly rounded nose has a windscreen stretching notably downwards, giving an excellent view for the driver and a racier appearance than normal. This is enhanced by the rectangular windows stepping upwards in diminishing size along the sides, surrounded by a rising sweep of grey and bronze decals.

The grille design is recognisable as being similar to that of its parent company’s vehicles, light clusters are fashionably slimline with tiny twin headlights, a row of LED driving lights alongside and foglights below, and huge coach-style mirrors hang at the front corners. The smart 16in alloys just add the finishing touch.

The starting price for the I 500 QB is £78,840 (excluding VED) but, as you might expect, this being a German vehicle, that isn’t what you’re likely to pay. The test motorhome came with a hefty set of extras (literally as they increase the MRO by 270kg), but the resulting spec was nothing extreme, just that to which many potential purchasers might aspire.

The base level 120bhp engine had been uprated to 160bhp, a five-metre awning had been fitted, as had an upgraded infotainment centre and rear view camera and the essential Touring Pack. To cater for all those extra features the maximum gross weight had been increased from 3,500kg to a much more usable 4,250kg, so the test motorhome was built on a Fiat Heavy chassis.

Including the hefty new VED charge (£2,135), this raised the on-the-road price to £98,765, and there’s a huge choice of other options. Putting this in context, though, an equivalent Carthago would be more, while a low-profile Malibu with similar layout would save you almost £10k.

Malibu’s A-class range includes two island bed models, five with twin beds and one with a transverse double. The I 500 QB has a rear island bed and you might also expect a drop-down bed over the front lounge but, instead, this example had extra overhead cupboards and was, therefore, purely a two-berth. Otherwise, the layout is fairly conventional.

With a polyester, wood-free structure, aluminium-clad side walls and GRP front, rear and top panels (the underside being protected by a glass-fibre skin), the Malibu adheres to current premium construction standards, and Carthago provides a six-year water ingress warranty.

Under all that bodywork hides a Fiat Ducato, so the cab is extremely familiar, and a quick perusal reveals air-conditioning and cruise control, stop/start, hill assist and traction control. The steering wheel here was standard, not leather covered, and bore no radio controls, either.

This matters because the aftermarket Pioneer infotainment centre has small buttons that some may find are not easy to adjust while driving.

On the plus side, to the driver’s right is a clear monitor for the full-time rear view camera. Together with those massive, top-hung, two-screen side mirrors, the rearwards vision is excellent.

And, from the sumptuous Aguti captain’s seats, the view through the panoramic windscreen is superb. However, as is the case with many other A-classes, the offside mirror is too big and rather close to the side window, causing a blind spot at junctions and roundabouts.

There are fold-down sun visors, or you can lower the concertina blind a tad to protect from low-level winter sun. And the two wipers (with effective, arm-mounted washer nozzles), set correctly for right-hand drive, sweep an excellent clear area.

We’d expect most buyers to choose the new nine-speed automatic gearbox (£3,305), but this one had the familiar six-speed manual instead.

The new engine is Euro 6d requiring AdBlue to meet stringent emissions regulations. With 160bhp and a hefty 400Nm of torque, it should surely be adequate to propel any motorhome when run-in properly (the test vehicle was brand-new).

From the trip computer, we predict that expected fuel consumption should be in the mid-20s mpg Roadholding is pretty good and the suspension seemed fairly supple over rough surfaces, courtesy of Fiat’s Camping-Car chassis (less harsh than the more expensive Al-Ko chosen by Carthago) and, by A-class standards, the interior is fairly rattle-free.

Inside the Malibu I 500 QB Touring motorhome

Two steps lead to the inside via the habitation door – an external manual step and an internal step, which is due to the double floor.

There are a couple of pockets and a full flyscreen fitted to the door, although no coat hooks.

The Malibu’s décor is pleasant, modern and classy. Seating around the fixed table includes the swivel cab seats – both with twin armrests – an offside inward-facing seat and an L-shaped settee, with everything on the same level (there are no steps until you reach the rear bedroom).

The L-shaped settee also doubles as a pair of forward-facing travel seats, although we found it a little awkward to convert the inner rear seat to its travel mode.

The lounge can seat five although it is much more comfortable with just four people seated and, while the tabletop moves around easily, access to the seats is limited.

Lighting is good, with high-level strips all round, reading lights and several ceiling lights, and there’s also a Midi Heki rooflight.

As there’s no drop-down bed over the cab, there is a vast array of high-level lockers fitted.

The (optional) television is slotted behind the offside seat and rises for viewing from the cab or sofa.

We couldn’t find either mains or USB sockets fitted in the lounge of the test motorhome (extras are available).

The kitchen in the Malibu I 500 QB Touring motorhome

The kitchen is compact and benefits from a design that optimises the limited space.

The available worktop is limited but, to increase it, the three-burner gas hob’s glass lid is split and the large circular sink’s lid doubles as a chopping board or a shelf is created by clipping its cover into a wall bracket.

Opposite the kitchen, a tower houses the separate fridge and freezer (a three-way, AES model with a capacity of 160 litres) with a combined oven/grill above.

The oven’s base is 1.65m high so will be a stretch for some, whilst the sharp-edged door opens out at 1.80m.

The kitchen is reasonably well lit and a mains socket allows your kettle to stand behind the sink.

Behind a solid wooden door, the shower cubicle is on the nearside with the washroom opposite.

If desired, the washroom can be separated from the bedroom by a sliding, three-panel wooden screen, the central section of which can optionally support a TV for the bedroom. This screen can interfere with access and, with one side lacking a catch, may slide open/shut if you have not levelled the motorhome when pitched up.

The washroom is really good. The swivelling toilet is at just the right height with plenty of elbow room and there’s a one-piece washbasin, shelf and soap area with swivelling mixer tap (most important).

There’s lots of storage, plus a concealed toilet roll holder (not too hidden), soap dispenser, mug holder and a robe hook.

The shower is also good, with a floor insert to protect the tray (remove it to close the translucent door), two drain holes, two moulded niches for unguents and a showerhead on a riser bar.

It may not be the widest cubicle, but it’s high enough (1.98m) for tall folk and its skylight includes a hanging rail for wet clothes.

And so rearwards to the star of the show – the island bed – and what a bed it is! Very large at 1.94m by 1.45m and very comfortable, the top third is split, with each bed head rising separately. Even without this welcome feature, there’s sufficient room to sit up in bed below the two overhead cupboards and there are good reading lights at each side, plus one USB port.

Yes, the bed’s foot is rounded to allow easier access, but it’s hardly noticeable and the mattress is designed to flip up on the offside, offering more room.

There are twin wardrobes (with a decent hanging drop, for once), plus cubbies for your specs and book.

Weight and payload in the Malibu I 500 QB Touring motorhome

Having a 4,250kg gross weight, the test Malibu had a huge payload of around 900kg, even with all the extras fitted. And there’s plenty of storage capacity to use it all, too.

For starters, there’s a large garage, the offside door of which measures 1.08m by 1.01m (the nearside one is smaller). By lifting the offside of the island bed on gas struts and using the designated sloping section of floor, it’s possible to carry two large bikes upright – this is Malibu’s patented Pedelec system. The carrying limit for the garage is 250kg.

There’s a separate external locker for mucky stuff, too. Then, indoors, there’s vast cupboard capacity, including those seven large overhead cupboards in the lounge and space under the sideways-facing seat and settee (more easily accessible through external doors, with the double floor giving across-motorhome storage).

Water tanks (a generous 125 litres for fresh) are protected within the double floor, with easy access for cleaning through a floor hatch.

The standard leisure battery is 80Ah, although there is an option for a second battery, or to upgrade (£2,080) to a lithium ion battery.