This Ecovip seems to combine lots of the best aspects of its rivals in one very cohesive, well-finished and rather stylish campervan. With all the options you’ll want, the Ecovip starts to look a bit pricey, but the Laika must now be compared with the very best in its class. 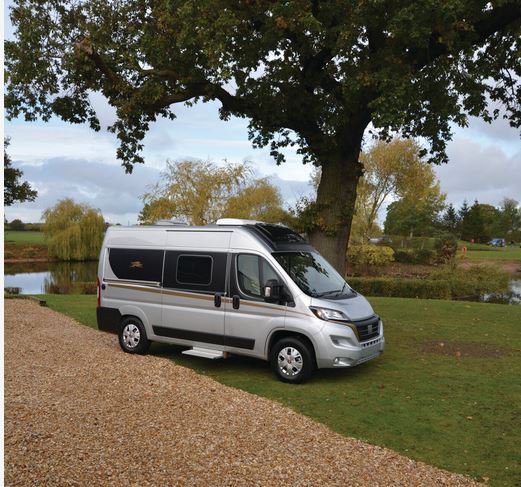 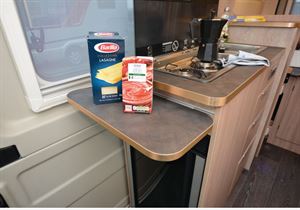 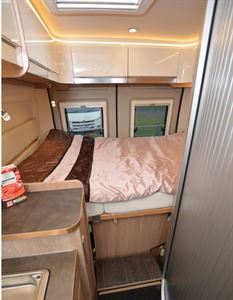 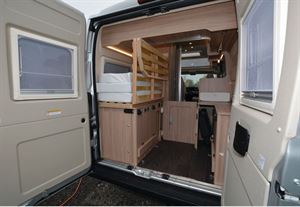 The first Laikas sold in the UK, back in 1988, were A-classes, at a time when the type was still a real novelty here. The brand continued to innovate with some of the first fixed bed low-profiles, around a decade later, and it has always competed in the upper echelons of the market.

In Erwin Hymer Group hierarchy, it sits alongside Hymer itself, with only Niesmann + Bischoff above it. So, you may be surprised to see its long-running Ecovip model name being applied to a campervan, as it is far harder to stand out in this super-crowded sector. But, the decision is easier to comprehend when you read that the group’s van conversion sales grew by 60% last year. And the new-for-2022 Ecovip campervans haven’t just nicked the moniker of their bigger brothers, but also gain the same interior design features as the low-profile coachbuilts (see February 2021, p107) and even the A-classes.

Furthermore, UK-bound Ecovips will be badged as the Da Vinci Edition, with a much higher level of standard specification than on the Continent. As such, the £67k ‘as tested’ price of the test vehicle (which was originally destined for an October NEC launch) is indicative of the UK spec, although there may be detail changes (such as a Laika, not Fiat, logo on the grille).

The Inclusive Pack alone accounts for £5,250 of the difference and adds a long list of features that you’d expect, including the electric step, flyscreen for the sliding door, cab blinds, Midi Heki rooflight, cab carpets, duckboard in the shower, as well as more upmarket touches like the plush fabric headlining and dimmable lighting.

Laika also makes much of the Ecovip’s suitability for winter camping. It’s no surprise to find an inboard fresh water tank (under the bed on the offside) but the Inclusive Pack also adds a heated and insulated waste tank. Then there’s the insulation, featuring polyester fibres and an aluminium protective layer, with additional insulation in the floor and roof, as well as the side and rear doors, to cut thermal bridges. That should help to keep the campervan comfortable in both summer and winter.

Gas heating is standard, with gas/electric, diesel or diesel/electric options. The diesel-fired Truma Combi (a £1,000 option) was fitted here and is more practical for foreign touring and off-grid living than a gas system.

In terms of layout, though, the Ecovip campervans tread familiar ground – at least for now.

This 540 is the baby of the range and both it, and the longer 600, have a transverse double bed at the rear. A 645 with rear U-shaped lounge will follow later.

Based on the medium-wheelbase Fiat Ducato, the Ecovip 540 certainly looks like a top-class camper, although steel wheels with plastic trims were a bit of a surprise. It’s perhaps the completely flush-fitting habitation windows that are the biggest plus, but it’s also worth commenting on the bronze highlights on the grille, which then link into the graphics and similarly hued flying greyhound logo (Laika takes its name from the first dog sent into space, aboard Sputnik 2).

Another key feature is the large overcab sunroof, called Skyview, while those seeking extra berths can instead order a pop-top roof (£3,530 in white or £4,420 in one of the optional colours – two greys or black).

If you want Fiat’s fancy new all-digital instrument cluster, you’ll need to find a further £2,340 for the Digital Pack, while the Driving Assistance Pack (lane control, traffic sign recognition, automatic lights and wipers, etc) is another £870 and LED headlights are £1,590. This example eschewed Fiat’s own multimedia set-up for a 9in display from Xzent linked to the crystal-clear reversing camera and sat-nav (priced at £1,770).

Few are likely to order the base 120bhp engine and it was the more typical 140bhp unit fitted here, mated to the new manual gearbox. The nine-speed automatic is available, as are further power upgrades.

Unless you’re going to be towing a heavy trailer, the new 2.2-litre 140bhp unit is perfectly adequate and actually felt quite lively around the back roads of Lincolnshire – quieter, too, than the superseded 2.3-litre motor. That refinement was backed up by a lovely absence of rattles, while the lighter steering and slicker gearshift make light work of driving the Series 8 Ducato.

It’s just a shame Fiat didn’t go a bit further with the facelift and include some better-quality plastics and tilt adjustment on the steering column. And, while there are just three colours to choose from, the cost of metallic paint has shot up to £1,090.

As soon as you open the (offside) sliding door, you’ll appreciate that the Ecovip is a cut above some of its competitors. The materials used, the quality of finish and the ambience all speak of Laika’s premium branding, while features like the full-length metal handles to open the top lockers (as also seen in Ecovip coachbuilts) display the Italian design heritage.

Our test vehicle came with the Pero Toscano furniture, while the much darker Rovere Moka cabinets are a no-cost option that would give the Ecovip an even more distinctive appearance. There are five upholsteries to choose from, too, including a real leather option, as well as this Udine leatherette (£620 extra).

In a part of the market where many rivals are much of a muchness, the Ecovip manages to look and feel a little different. That’s not just in aesthetic touches like the copper edging on the worktop but also in some practical elements, too.

I particularly liked the way the dining table folds in half to act as a snack/coffee table and then folds again to lie flat against the wall for travel (better for safety as well as increasing the feeling of space). Then there’s the way the half-dinette bench slides forward, tilting the backrest slightly as it does so for better passenger comfort.

There’s Isofix as standard, too, for easy installation of child seats. None of these are new features and the opening overcab sunroof and full headroom in the cab are becoming commonplace, but the inclusion of all these aspects in one vehicle is a plus. And the chocolate sprinkles on the top are the excellent interior lights – stylish mood lighting, reading lamps with integral USBs and dimmable strips, too.

Kitchen storage in drawers rather than cupboards wins immediate brownie points for the 540, as does another new (but increasingly seen) feature, the fridge that opens from either side. It’s a 70-litre compressor model, conveniently placed to grab a cold can either from outside or when sitting in the dinette.

The embossed pattern on the wall here is another unusual design touch inherited from the bigger Ecovips, while the drawers have metal pop-out handles and soft-closing mechanisms. It all feels suitably upmarket, but you can’t get away from the fact that this is a small campervan with a small galley.

The only cooking equipment is a two-burner hob, while worktop is limited once the glass sink and hob lids have been raised. The raised section next to the bed proved big enough for my Tassimo coffee machine but the slot-in extension above the fridge felt a tad flimsy, as well as being quite awkward to locate in its rail. The kitchen drawers are too small to house the panel, too, so it will probably be stowed in the base of the wardrobe.

Located under the rear end of the kitchen, the space for your best Sunday clothes is especially neat. It looks like another too-tiddly-to-be-much- use wardrobe until you pull on its handle and find that it slides out like a super-sized drawer, making your designer clobber easy to reach.

Immediately opposite is another slide-away feature that gets a big thumbs up – folding steps that pull out to ease access to the rear bed.

You can’t open the wardrobe with the steps in place but access to the washroom is not affected and it seems a small price to pay for easing the climb into bed. The mattress here is described as ‘high-comfort, anti-mite, breathable’ and it definitely seemed well-judged for inducing zzzzs. Strangely, though, the Laika BioLatex mattress is rather smaller than the space in which it fits.

Look at the measurements in our data section and you’d think the bed here was only for small folk but, actually, the usable dimensions are more like 1.88m by 1.22m. Why the mattress isn’t longer is a bit of mystery…

It also seems a tad odd to fit a plush padded headboard on the offside, along with a pair of reading lights (featuring built-in USBs), and then make it impossible to sit up in bed because there are overhead lockers on all three sides of the bedroom. You have to admire the way the lockers curve at the corners to appear as one seamless unit, though.

A better resolved feature is the trio of opening windows (two in the rear doors, another on the nearside) that, along with the roof vent, give plenty of ventilation. The top of the wardrobe makes a good bedside table, too, while the array of top lockers at least means plenty of room for folded clothes.

The Laika also scores well when it comes to under-bed storage. There’s a removable false floor, so you can separate smaller items (mains lead, levelling wedges, etc) from bigger gear such as folding bikes and barbecues.

There’s a door into the space from the living area, too, while this front panel can also be removed to allow long items to extend into the galley area, all the while being secured to the tiedown points.

The garage area measures 880mm by 1,050mm with a maximum height of 570mm when the false floor is in place and up to 790mm with it removed. If you want even more space, stack the mattress sections on the nearside and the slatted bed base simply hinges and folds to give you floor-to-ceiling storage capacity in one of the easiest and simplest methods I’ve come across.

There are no curtains in the bedroom, but you’ll need to press stud a shower curtain into place in the washroom to protect all the wooden furniture if you want to take a shower. That’s the big compromise of the 540 over the 600 model, which has a Vario washroom with a swing-wall design.

In the smaller campervan you still get a corner basin, useful storage, plenty of mirrors and an opening window, as well as a roof vent. The basin’s tap doubles up as the showerhead, while there’s just a single, corner drain in the shower tray. Note, too, that headroom in here is just 1.77m.