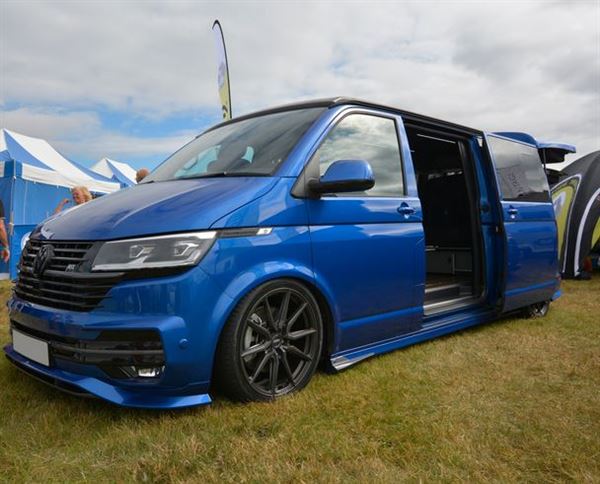 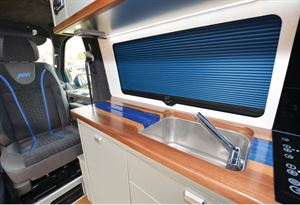 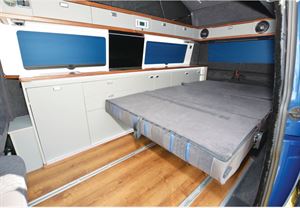 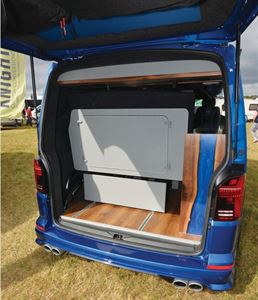 How much? Let’s get the price over with first because it’s a figure that you need to get your head around. This is, after all, a VW camper, not a tag-axle A-class. But nor is it a show vehicle built on a whim, it’s a customer’s campervan constructed to his specification. It is quite some spec, as we’ll explain, but the total cost of £116,000 also makes it the priciest pop-top we’ve ever featured.

Of course, if you’re going to build the ultimate Volkswagen camper, then it’s likely to start with a fully loaded T6.1. That means a long-wheelbase in Highline trim, with the 204PS turbo-diesel engine sending power to all four wheels through the 4Motion all-wheel drive and DSG twin-clutch automatic transmission. That’s nearly £50k-worth of panel van, before options.

And there are plenty of options ticked here – heated cab seats, a locking differential, Discover Media sat-nav, front and rear LED road lights, a reversing camera, heated windscreen, adaptive cruise control and automatic traffic sign recognition. Knights Custom Conversions’ Jonathan Nightingale says he couldn’t think of anything else the customer could have added and, if we’ve missed anything, it’s probably because the Editor doesn’t do shorthand and was frantically trying to list all the spec on paper as excited campers at Lincoln’s Motorhome Show Season Finale swarmed around this super-VW like wasps around a jammy croissant.

One wag was heard to opine that you wouldn’t get far on Spanish roads with so little ground clearance but, of course, as shown, this is just its ‘parked’ position. The Bilstein air suspension system with Air Lift, as fitted here, not only allows the campervan to sink to the ground on site for easy access but it can level the vehicle, too – all via your phone or a switch on the dash. This installation gives a sport mode for driving but, alternatively, it’s possible to raise the vehicle 30mm above the standard ride height for crossing rough ground.

You’d not want to risk damaging that expensive Abt bodykit with its protruding front splitter, distinctive side skirts and a rear bumper that wraps around the four Ferrari-esque tail pipes.

And that’s not where the cosmetics end – the 20in Vossen hybrid forged alloy wheels were custom-made and specially imported from the States at a cost of over £4,000. Then, Knights exactly colour-matched the details of the body styling to the grey of the wheels. You’ll be starting to get an idea of the level of detail that Jonathan went into with his customer on a build that took six months...

The buyer was very specific on certain details, so the roof here is not Knights’ usual favoured Reimo but instead a Stealth B2 roof with its unique lifting mechanism developed by aerospace engineers. Finished in real carbon fibre, this pop-top is so slim that, at first glance, it appears as if this is just a fixed low-roof camper. It has an unusual key-operated latching system, too.

External features continue with a hydro-dipped carbon fibre finish for the front grille and details. There are Reimo multi rails on both sides (so an awning can go either side), a Horrex flyscreen on the sliding door and a 16-litre underslung gas tank. The generosity of that LPG supply comes to the fore when you realise that it’s only there to service the external barbecue point – the customer didn’t want any gas appliances inside the vehicle.

That, in turn, explains the importance of the electrical installation here, with a Clayton LPS off-grid system featuring a 100Ah lithium battery, 50A AC charger, 50A DC charger, 2,500W pure sine wave inverter and built-in UPS (uninterrupted power supply) – so that, if the hook-up is disconnected, the inverter automatically cuts in. There’s a jump start feature, too, in case the vehicle battery should ever be flat.

Cooking is electric, of course, with an induction hob and a microwave oven/grill, while the fridge is a 12V compressor model with a door that slides out towards you like a drawer. Warmth comes from diesel via a Webasto Thermo Top Evo RV system with 5kW blown-air space heating and a hot water boiler. That serves not just the kitchen sink but a rear external shower fitting.

Inside, even the steering wheel has had Knights’ attention – the carbon fibre helm is finished in Nappa leather. All the internal panels have not only been insulated but covered with sound-deadening material, while the vehicle’s A and B pillars and side panels are trimmed in suede-like Alcantara. There’s a custom-made ceiling, too, with a unique circular hatch to access the roof bed. The seats are upholstered in a mix of leather and Alcantara, proudly displaying the logo of tuning company, Abt, in blue to match the exterior.

The cab has a double passenger seat not only mounted on a swivel base but rails as well, so that it can move rearwards and allow the driver’s chair to also rotate. With the Reimo Variotech 3000 sliding seat system in the rear, this could be the first T6 camper to not only have six travel seats but a sextet of seating positions on site, too.

Having read this far, you’ll begin to understand where one VW camper fan spent so much cash, but we haven’t yet mentioned this Prestige Tourer’s most striking feature. That’s the kitchen with solid American black walnut worktop featuring a live edge (that’s the original tree). Inset into the counter is river of blue that’s backlit with LEDs – at night it looks truly amazing!

This is a one-of-a-kind campervan finished to exceptional standards. Jonathan advises that his typical customer spends around £80k (already at the top of the VW market), but a bespoke build like this can obviously cost considerably more. What’s clear is that Knights can equip and finish a T6.1 to this lofty level, which just leaves us wondering how long it will be before the Lincolnshire converter tops this one…