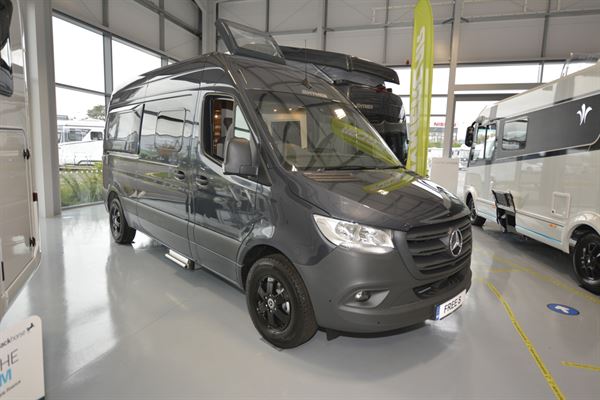 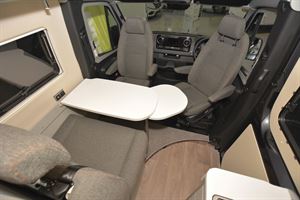 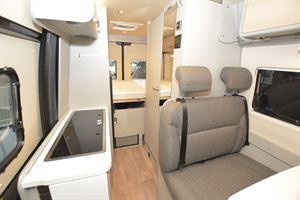 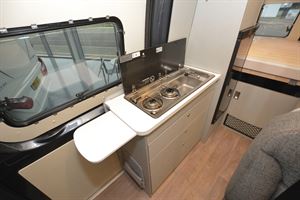 If you’re looking for the popular European style of campervan with a transverse rear bed and large storage space below, then you can almost guarantee that you’ll be driving away in a Fiat Ducato.

Not only does the Sevel van have a price advantage, but its internal width suits this type of layout better than other panel vans, which struggle to accommodate a full-sized widthways bed without modification.

Look hard enough and you can find alternatives. Just. And we’re not talking about Citroën or Peugeot-based versions of the same van. Hymer has long offered its Grand Canyon S on the Mercedes-Benz Sprinter and that model continues, in both rear-wheel drive and 4x4 forms (even the new CrossOver Edition for those who are really serious about off-road adventures).

The Grand Canyon S is, however, an expensive option, so it’s good to see a Sprinter-based model in the Free range, too, which is Hymer’s entry-level campervan line that also boasts a younger-feeling design.

The 600 S that we’re featuring here is one of four Free models, but the only one with the three-pointed star on the nose. Unlike the Grand Canyon S, it’s a front-wheel driver Merc that’s the basis here, while overall length remains just under 6m.

The base price is over nine grand lower than its RWD sister but don’t be fooled into thinking it’s a budget campervan. Hymer’s usual extensive list of options took the total tally for this demo model at Erwin Hymer Centre Travelworld to £67,985.

However, that still undercuts Westfalia’s Mercedes James Cook and Volkswagen’s Crafter-based Grand California. If you don’t want a Fiat, there’s a premium to be paid…

Spec’d like this, you’ll certainly end up with a stealthy camper. Dark grey metallic paint is mated to black six-spoke alloy wheels here, with a carbon fibre-effect trim panel around the windows in the barn doors at the rear. Graphics are simple and habitation windows sit flush with the body but it’s a surprise to see an unpainted front bumper.

On the rear quarter panels each side, where you might expect to find a bedroom window, is a moulded bulge, added by Hymer to give sufficient space for the bed inside. With the Tenorite Grey colour scheme here, they blend in well, although the nearside ‘swelling’ is deeper because it doesn’t have to be cleared by the sliding door. The larger nearside pod incorporates a window, too.

Inside the Free, those mouldings allow a decent-sized bed – 1.93m by 1.27m (max) according to our tape measure, but the intrusive rear pillars steal some mattress space in the back corners. If you’re a couple where one of you is shorter, then he/she should, ideally, kip adjacent to the doors.

The cold foam mattress itself seems comfy, though, and rear speakers are fitted here, along with reading lights that can be repositioned on rails on either side, although overhead lockers prevent sitting up in bed.

Ventilation is well catered for not just by the nearside window but also openable glazing in the barn doors and a small roof vent above. It’s worth noting, however, that the bed is quite high (1.02m off the floor), so you’ll want to carry a step for access.

Returning outside, the first thing you notice when opening the back doors is the optional outdoor chairs, neatly strapped into position in front of the gas locker, as well as a free-standing table for al fresco dining.

The fixed cabinets here include drawers on either side (never an ideal solution in this space as they’ll be hard to access if you have anything bulky in the main load area) and the space between the lockers is 840mm high but just 590mm wide.

Some rivals offer a much larger garage, although you can still fold up the centre section of the bed for tall items, such as bikes, to be carried.

Of course, it’s the large sliding door that’s the main entrance and here you’ll find a flyscreen and electric step. When closed, we’d like to see more thorough trimming of the door, though, as there’s quite a lot of painted metal on show here.

The lounge is the classic half-dinette design but, while Fiats are only just starting to appear with a full-height walk-through into the cab, that’s always been a benefit of the Sprinter.

Read every Hymer campervan and motorhome review published in What Motorhome magazine since 2012 by using our new online digital archive. Just enter 'Hymer' into the search bar below:

Here, the superb Sprinter seats (with extending squabs for long-legged users) are a further plus, along with the optional Isofix mountings for child seats on the rear bench. The table extends to serve the swivelled driver’s seat and there are USBs and a mains socket conveniently located here.

We also liked the padded upholstery around the dinette window, the large Heki rooflight and the ambient lighting over the top locker.

The kitchen is compact, with a combination two-burner hob and sink unit. The three super-sized drawers (including a cutlery section and a bin) are its best feature, while a small worktop flap by the door offers the only worktop.

There’s a 90-litre compressor fridge, too, but the wardrobe above it is tiny, having a drop from the rail of just 550mm. You’ll probably fold clothes instead but, if you must hang up a jacket, there’s a second rail (not enclosed) over the bed.

One of the Hymer’s best aspects is its washroom. You step up into here, so headroom is reduced to 1.81m with the shower tray’s cover in situ, but there’s plenty of room to use the bench cassette toilet or the fixed basin. We liked the opening window, drying rail, hooks for towels and flannels, and the elasticated straps to hold your toiletries in place. Space for showering looked quite tight, though.

Of course, the Mercedes has less room inside than the equivalent Fiat and you witness that in various areas of the Free 600 S.

However, some will willingly make that sacrifice for a sophisticated Benz base vehicle. Not only will the Sprinter feel more modern from behind the wheel (especially with the 9G automatic gearbox fitted here in combination with the 143bhp engine), but you get all the modern safety kit, such as Traffic Sign Assist, High Beam Assist, Attention Assist and Active Lane Keeping Assist.

The cab is dominated by the 10.25in MBUX multimedia display, which incorporates the sat-nav, too, while automatic air-con and a 360-degree camera system were also fitted to this model. It’s the (three-pointed) star quality that’s the raison d’etre here.