The Hillside Cromford is ideal for those who love the VW T6 base vehicle but hanker after the amenities usually found in larger campervans, like a real washroom and a proper kitchen. It suits couples wanting a comfy, spacious lounge with the practicality of single beds but being a four-berth makes it suitable for families, too, although storage could be an issue. You’ll also need to take a good look at the shorter beds and rear elevating roof if you’re tall. 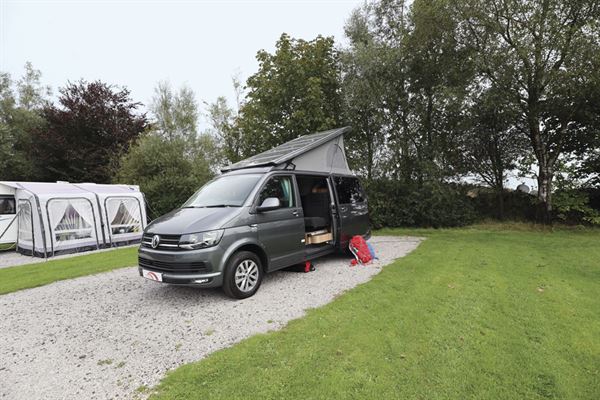 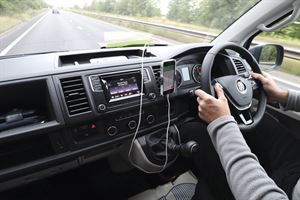 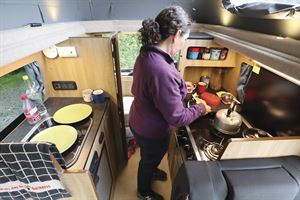 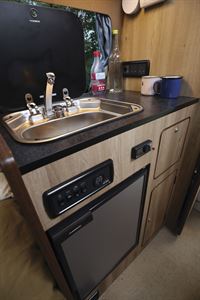 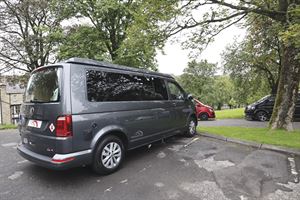 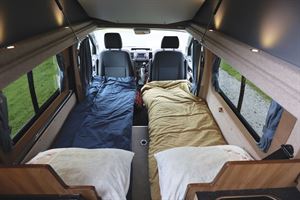 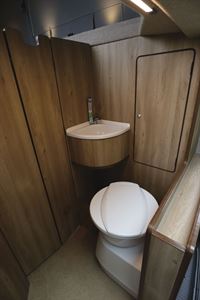 One question we're often asked is what the difference is between a campervan and a motorhome, and that’s a difficult one to answer. Some say it comes down to the construction – panel van conversions are campervans while anything with a coachbuilt body is a motorhome. Others argue it’s the size that matters – if it fits in a car parking space then it’s a campervan.

According to the DVLA, however, there is no difference – both are classified as motorcaravans. So, go figure. If you ask someone to define a campervan, they will probably describe a small Volkswagen with a side kitchen and rock ‘n’ roll bed layout.

This is the archetype. A classic design that’s as old as the hills and remains relatively unchanged, like the base vehicle itself.

But what do you do if you love the VW T6 but not the traditional layout? What if you want stuff more typically found in larger campers, like a washroom with a proper loo, a basin and hot running water? Or comfy single beds? Step forward the Cromford.

Derby-based Hillside Leisure specialises in Volkswagen campers, which it builds from scratch at its own premises, and all are named after pretty villages in the Peak District, like Cromford. The company is one of a handful of Volkswagen-approved converters in the UK, and its campers also have European Community Whole Vehicle Type Approval and are NCC (National Caravan Council) approved. In short, its campervans are the bee's knees where safety is concerned.

The Cromford is priced from £45,495, although the one we tested here at Campervan magazine had a price tag of £54,385 because the base vehicle came in Highline specification with a 148bhp (150PS) engine and a six-speed manual gearbox, as well as Eberspächer diesel heating, metallic paint and a soft-closing side door.

However, if your budget doesn’t stretch this far, you still get a well-equipped campervan in standard fettle. With Hillside, there are no hidden costs and the optional extras list mainly consists of superfluous, pretty stuff like fancy alloys and go-faster decals, so it’s up to you how much you want to spend.

As standard, you can expect a Smev combination three-ring hob with oven and grill, and a 50-litre fridge/freezer in the kitchen. You also get pumped hot and cold water, a Dometic fixed cassette toilet, and an external activity shower. There are two RIB rear seats that convert to single beds or a double, and an SCA pop-top with a roof bed, making this a four-travel seat, four-berth campervan.

The Hillside Cromford campervan on the road

To accommodate the rear washroom, the Hillside Cromford campervan is built only on the long-wheelbase T6, which is 40cm longer than the short-wheelbase (5.29m versus 4.89m). That’s just over a foot in old money and it makes all the difference inside. However, it’s not that noticeable on the road, except for a slight fishtail when going around roundabouts too quickly and, obviously, it will overhang most car parking bays, too.

The LWB is also on the T30 chassis (T32 if you opt for the 201bhp engine) instead of the T28. These numbers refer to the gross vehicle weight, so you may get a slightly higher payload on the longer body, but you’ll also prefer one of the bigger engines to cope with the heavier load.

We love the 148bhp (with a six-speed gearbox) fitted to this test vehicle, although there is a 201bhp if you want to go bigger, and you’ll need to opt for one of these two if you want an automatic. The smaller 101bhp would also be OK (depending on your driving style) but note that this engine is increasing to a 108bhp on the new T6.1 next year (still with a five-speed gearbox), and this will be well worth test driving.

If you can afford the extra £5k (ish) for a Highline, you’ll then get additional stuff like a Thatcham Category 1 immobiliser, cab air-con, cruise control, rear parking sensors, heated windscreen, automatic wipers, and leather multi-functional steering wheel, as well as the Comfort Pack and colour-coded bumpers, mirrors and handles.

Whichever you opt for, the campervan conversion will be the same. That means you get comfortable VW factory fit cab seats (which both swivel), and two huge rear RIB seats that any passenger will enjoy sitting in. Nothing rattles as you’re going along, so you shouldn’t have to shout, either.

The lounge in the Hillside Cromford campervan

The lounge is the reason many will favour this campervan over one with a side kitchen layout. Once on site, it takes no time to swivel the cab seats and set up the table – this is a pole-in-the-hole type, and the tabletop clips to the passenger side wall when not in use while the leg sits by the sliding door. The result is a spacious lounge/diner where four residents can eat at the table and recline in comfort afterwards.

Lighting is good, too, with four LED spotlights, so you won’t go blind reading or playing cards. But, tall people, beware. In order to maximise standing room in the washroom, the pop-top roof elevates at the back instead of the front. This means standing room is limited towards the cab and you may find yourself banging your head on the base of the roof bed as you get up from a swivelled cab seat.

When you’re ready for bed, at the lift of a lever on the side, each of the RIB seats easily flips over to reveal the flat side, leaving you with a pair of single beds. If you prefer a double, they can be pulled together, but that kind of defeats the object of opting for this layout. The joy of single beds here is that there is a good gap between them, so there’s plenty of room for both of you to be able to get in and out of bed.

The swivelled cab seats also play a part in the bed construction, meaning that the one on the driver’s side is about 20cm shorter because of the steering wheel, which restricts how far the seat will go back. Both beds are 59cm wide, while one is 1.70m long and the other is 1.90m. All the windows, including the cab, benefit from proper fabric curtains.

In the morning, it’s easy enough to flip the beds back to seats. But if you’re not driving off anywhere, it’s well worth leaving the bed up on the driver’s side as it makes a really comfy sofa. There is also a practical reason, and that’s storage. There’s nowhere specific to store bedding during the day, so it makes sense to leave one bed up and store bedding from the second bed here.

We ditched the double duvet in our campervan years ago in exchange for single bed rolls as they are so much easier to put away and store during the day. We found there was plenty of room for them in the tailgate here when travelling. Bear in mind, if you’re using the camper in four-berth mode, you’ll have that bedding to store, too, in addition to the ladder for accessing the roof bed, which measures 1.86m by 0.99m.

The rear washroom in the Hillside Cromford

Another reason for buying this campervan is, of course, for that rear washroom, which is pretty good by campervan standards.

As it’s at the back of the campervan, it's out of the way when you’re not using it, and it can be closed off with a couple of doors that offer privacy when using the toilet.

On the one side, there is a Dometic fixed cassette toilet where head and knee room is ample. Above the toilet is a small washbasin that benefits from having both hot and cold pumped water – very unusual in a campervan of this size – and a cupboard to the right. Also located on this side but accessed from the tailgate is an external activity shower. The hot water system works when hooked up to electric. It's basically a six-litre immersion tank, so no need for a combi boiler.

Opposite the washroom section is a large cupboard with a number of shelves in it that’s ideal for storing books, clothes, etc. The walkway through the back of the campervan is also nice and wide, and the tailgate has a button on the inside to open it as well as a loop handle to pull it shut. Very handy when the beds are up for getting in and out of the campervan, if you need to.

And, if the practical washroom and comfy lounge aren’t enough to swing it for you, then perhaps the proper kitchen that sits in the middle of the campervan might. On the one side, there’s a real cooker like you’d have at home with a three-burner hob, oven and grill. To the left, there’s workspace and a shelf, and a couple of good-sized cupboards below for pots and pans.

Opposite, you’ll find the sink with some workspace around, a couple of three-pin sockets and a 12V socket. Below, there’s a 50-litre compressor fridge/freezer with a cupboard to the right and a cutlery drawer above. Both the cooker and sink benefit from dimmable strip lights above.