If you’ve got your heart set on a VW T6 campervan with a side kitchen layout then this is one not to be missed off the shortlist. The excellent Reimo rising roof and bench/bed system make the Drift exceptionally user-friendly, while the slim kitchen design allows for a spacious lounge and a proper swivelling driver’s seat. Along with a 6ft 4in-long bed, it’s great for taller folk. Having five travel seats (with the option of a further two) makes it a very practical all-round vehicle indeed. 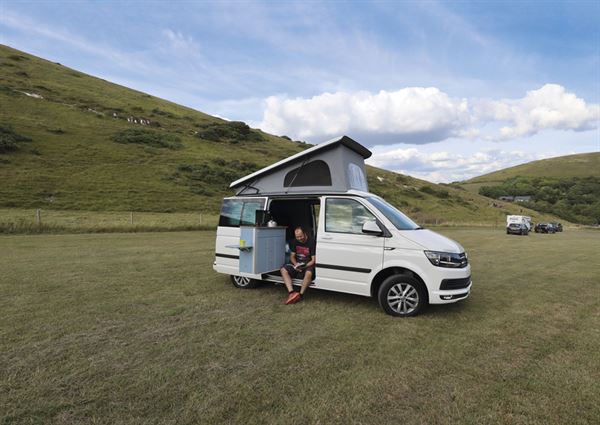 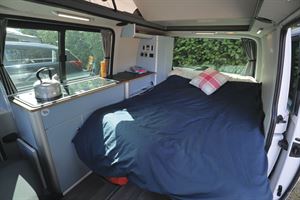 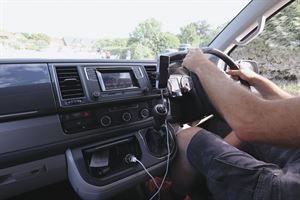 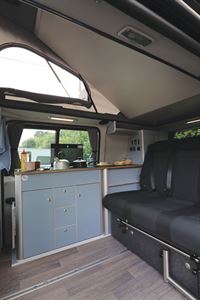 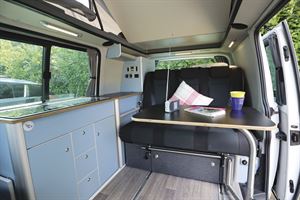 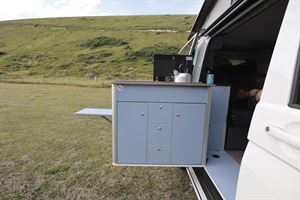 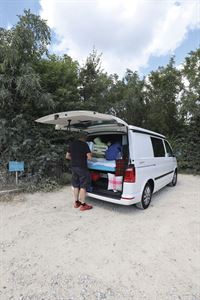 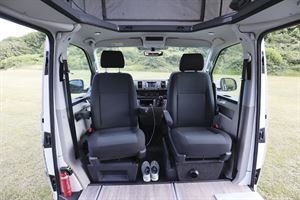 They say you get what you pay for. But in the case of the Hembil Drift campervan, where you’d get very little change back on £60k, you can’t help but think what else you could buy if you had that much cash gathering dust under the bed…

It’s a big chunk off anyone’s mortgage. If you went on Homes under the Hammer, you could probably buy a whole street for £60k, or a whole country on A Place in the Sun. Comparatively, £60k will only stretch to a pane of glass hand-woven by Tibetan pixies, or similar, on Grand Designs.

So it’s all relative. But I know what I’d rather have. In fact, I defy anyone to spend a weekend in a HemBil Drift campervan and not come away wanting one. I mean, who really wants to own a whole street in a grotty part of the country you’d never visit, or a deserted country that’s about as much fun as Mars? You’d be much better off with a state-of-the-art campervan that can transport you to much better places, like Tibet, to collect your own pane of glass.

So why all the fuss? Well, the HemBil Drift is built by CMC (Concept Multi-Car) Reimo – a brand that’s been making VW campervans since 1988, and one of only a handful of manufacturers in the UK that’s accredited by Volkswagen.

These campers are built to a high standard. And it shows, from the soft-close rattle-free cupboards and drawers to the super-comfy and easy–to-put-up bed, and pop-top. Take it out on the road for a spin and it’s easy to see why VW-based campervans are so popular.

The demo model had the 148bhp (150PS) 2.0-litre TSI petrol engine under the bonnet, but we won’t dwell on that because it’s been discontinued by VW.

A bit of a shame really – it was longer lived on the Continent but we were late adopters and it seemed that no sooner did the UK start importing them were they discontinued! The petrol T6 never really took off as a fleet vehicle. The best I managed was 32mpg, compared with around 38mpg in the diesel equivalent, so perhaps that’s understandable.

Apart from that, they drive the same, pretty much. The petrol is slightly quicker off the mark but it’s negligible. When we say that a campervan is car-like to drive, it means that the only real difference between the T6 and the Golf, for example, is that you sit higher up. Everything else is the same, from the adjustable steering wheel with he dash with its 6.33in touchscreen media system. The Drift Low SWB (a short-wheelbase pop-top) is only 4.89m long and 2m high, so you can take it most places you’d take a car, too. It’s also available in LWB and high-top versions.

The base vehicle is offered in two standards of specification – ‘Startline’ and ‘Highline.’ Opting for the budget T6 will knock a few quid off the price of your campervan (about £4k) but you’ll miss out on stuff like cab air-con, cruise control, rear parking sensors, anti-theft alarm and Clayton 16in alloy wheels, which are standard on the HighLine. All these extras are available individually from the options list, though, so you can build a Startline to your own spec.

What sets the HemBil Drift apart from other Reimo T6 campers is the kitchen design. The base vehicle has two sliding doors – one on each side – so you can open the door behind the kitchen unit and swing it out.

The unit itself is of the standard type found in a side kitchen layout campervan, with a couple of gas burners and a sink, and cupboards below. But this one is secured to the floor at one end with a bolt that’s got a handle on, so it’s easy to turn.

It takes just seconds to release the kitchen unit and swing it around and out of the campervan, meaning you can cook al fresco and enjoy more space inside. Having double doors is also handy for loading and unloading, especially if you park on the kerb.

However, at 5ft 1in tall, I don't think the HemBil campervan's kitchen was designed with me in mind. Because the unit isn’t removable or height-adjustable, in outside mode, the hob was just about eye-level.

But the kitchen is so nice, I was quite happy just cooking inside. The double gas hob with electronic ignition is powered by a 907 Campingaz bottle, and the adjacent sink (cold water only) has an automatic tap. Both sections are covered with glass tops, so there’s plenty of space for food prep. There are loads of cupboards and drawers below for all your food and kitchen clobber, too.

But what my 6ft 1in husband and I really loved about this grand kitchen was the slimline design, which is achieved by using a nifty 26-litre top-loading 12V compressor fridge that lives in the workspace to the right of the kitchen, next to the travel bench/bed.

Not having a fridge where you’d commonly find one – below the cooker, behind the driver’s seat – means you get a swivel driver’s seat that’s not obstructed by the kitchen when fully swung around.  Even with the bed set up, my lanky-legged husband and I had plenty of room for stretching out in the swivelled cab seats in the evening. Not bad for a SWB van.

Being a Reimo camper, it’s fitted with the German company's own Variotech 3000 rear bench seat and rail system. The bench has three seatbelts (best suited to three kids/lanky teenagers rather than fully grown adults) and a further two single travel seats can be added thanks to the rail system, making it up to a seven-seater.

A further advantage of having a bench on tracks is that it can be moved forwards or backwards, giving you versatile loading options whether you’re using this as a camper or as your daily runner.

Another nice thing about the Variotech 3000 is that the back of the bench can sit in any position you like between fully upright and totally flat, meaning you can recline as much or as little as you like. But what I most love about this system is how easy it is to switch between bench and bed modes.

Berths and beds in the HemBil Drift campervan

If you’ve ever wondered why some T6 conversions are super-expensive while others seem quite cheap, although they look the same, take the time to put the bed up… Bad systems will leave you with a dislocated spine and decapitated fingers, and a night spent with a seatbelt latch lodged somewhere unpleasant!

Top-of-the-range bed systems like the Variotech 3000 can be deployed in a matter of minutes, without any fuss, giving you an extremely comfortable and generously sized 1.95m by 1.25m double bed. That’s 6ft 4in by 4ft x 1in in old money, meaning my six-foot-plus tall husband and I had ample room, and slept like babies.

A further two berths are courtesy of the roof bed in the pop-top. And again, if you’re heading to the NEC in October in the hope of spotting your dream pop-top campervan amongst the myriad on display at the Motorhome and Caravan Show, do take the time to fiddle with roofs.

Like rock ‘n’ roll bench/bed systems, pop-tops range in quality from awful to awesome… I once used a campervan fitted with clips so dreadful that I couldn’t close them.

In the absence of rope, I ended up using my electric hook-up lead to tie the roof down to the cab seats in order to get home safely!

That was not awesome, but Reimo’s own elevating roof is. It’s simple, and that’s what makes it genius. When down, it’s secured with a pair of straps that feed through clips – just pull the straps to tighten them. When you want to deploy the pop-top, undo the straps, give it a bit of a push, and up it goes. I’m never tall enough to reach the handles to pull a pop-top back down again, meaning I have to pull on the straps first. If the struts are super-stiff this can be a struggle, but not here – a light tug is enough to gently bring it down. Simples. And, if you prefer, an electric elevating roof is now available for £1,800.

The optional roof bed (£550) fitted to this test vehicle measured 1.95m by 1.15m and was comfy enough. A lollipop reading light up here means you’re not left scrabbling around for a torch if you need to get up in the night, and a child safety net (£120) stops you from falling out.

The rest of the campervan is also kitted out to a high spec and in a well-thought-out manner. There’s a table that pivots so it can be used for dining when sitting on the bench, or swivelled passenger cab seat, or used like an American bar outside. When not in use, the tabletop neatly clips to the sliding door while the leg lives in the storage space under the bench seat.

Very tidy blackout curtains popper together in the middle, and also popper to the sidewalls so they can’t come astray. A number of LED lights throughout – including reading lights in the cab – ensure the whole area is well lit. There are 12V/240V sockets, and USB plugs can be added for £60 each.

Note that this demo campervan didn’t have a rear side window on the passenger side, but production models will have. Other features include Eberspächer blown-air diesel heating (Webasto, in the case of this petrol demo), 24-litre fresh water tank, and passenger and driver side awning rails.

A sunshade (costing £680) can be attached to this. You might also want to opt for the roof-fitted solar panel, which costs £695.