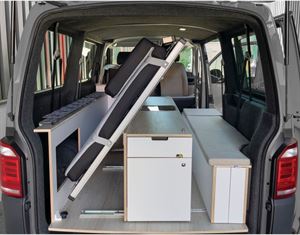 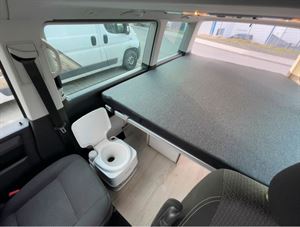 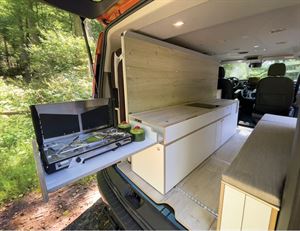 Forget Tom and Barbara Good (Richard Briers and Felicity Kendal) in wellies, tending to their pigs in a suburban garden; the German creator of this unique campervan, Tobias Vetter, isn’t old enough to have watched the BBC sitcom and would have been too busy as a professional mountain biker to download the reruns. The name might amuse British buyers but Tobias has come up with one of the cleverest VW campervans we’ve ever seen.

It all started last March, after the Covid pandemic caused the closure of his Bavarian lifestyle magazine and a rethink on his future. As with so many campervan creators before him, he set out to buy a ’van, only to find that none met with his requirements. It’s a familiar tale, but there’s nothing familiar about the Good Life Vans conversion he came up with and for which patents are being sought.

Number one desire, around which the design revolves, was a proper bed. Not the narrow berth created from seats and sandwiched between the kitchen and opposite wall that is typical of a small campervan but a sleeping space offering domestic-style size and comfort. Here, the bed is 2.00m by 1.60m – bigger than a UK domestic king size – and, if you see the Good Life Vans module in its night-time configuration, you might be forgiven for thinking that this camper is little more than a van with a big bed in it. But it is so much more than that.

The bed isn’t just super-sized, it has a specially developed unsegmented cold foam mattress lying on plastic disc springs that are screwed to a slatted frame. And the really clever bit is the way the bed tilts and slides, folding away in 10 seconds or less. As it tips, it, and the kitchen to which it is attached, slide to one side, revealing a wide aisle and a simple bench seat opposite. The underside of the bed is then an upright wall, facing the seating, but you don’t have to leave this plain. The show model had a landscape photo here and you can supply your own favourite image to be printed.

That wall is also the splashback to a surprisingly long galley that can comfortably be used while sitting on the bench seat. It includes a two-burner hob (fed by small gas cartridges to avoid issues of venting in a kitchen that moves) that can also slide out for use outside, standing under the rear tailgate. Then there’s a sink that’s larger than you’d normally find in a ’van of this size, fed by a pair of 12-litre water carriers, with a third container receiving waste from the sink. There’s an outside shower at the rear of the camper, too, and a 42-litre compressor fridge facing the cab at the forward end of the kitchen.

While the big bed is obviously a key part of the Good Life Vans’ USP, the way the conversion is installed is another major feature. Available as an addition to customers’ existing vans, the Modul One costs from €11,490 and it can be fitted not just to VW T4s, T5s, T6s and T6.1s (short or long-wheelbase models), but also most other similarly sized panel vans, such as the Ford Transit Custom, Mercedes Vito, Renault Trafic and Peugeot Expert. To your chosen van, you need to add some curtains or blinds for the windows and probably swivel bases for the cab seats. A pop-top could be added, too, but the Good Life Vans’ design perhaps works best without – its only travel seats are those in the cab (so it’s no more than a 2+1 berth, at best), and the concept is for a discreet vehicle that looks like a standard van when wild camping.

If you prefer to buy a brand-new, converted camper that’s ready to go, then Good Life Vans can also take you down this route, with a Ford Pure priced (in Germany) from €39,900 and a VW T6.1 version from €49,900. There isn’t a UK distributor yet but the company’s PR representative, Isabel Werdin, reports that they have already had strong interest from these shores and adapting the design to right-hand drive is not seen as a major stumbling block. When it does come here, whether in module form or as a Pure camper, it will surely be one of the most versatile conversions on the market. As well as the features already described, it’s worth noting that the bench seat has a simple folding mechanism to create a wider gangway, giving space to get two mountain bikes inside the vehicle.

With the cycles removed and the bed down, there remains access to the fridge and, more importantly perhaps, the Porta Potti that stores in its own unit adjacent to the sliding door. Of course, both swivel cab seats (the most comfortable pews when sitting inside) can also still be used, while the neat table swivels, folds and can even be used outside.

Perhaps the neatest feature of all, though, is the way the module is installed in the vehicle using existing mounting points. It is, therefore, fully removable (leaving no trace that your window van was ever a camper). You could install it in a leased vehicle and remove it at the end of the lease, or move it from one van to a newer one (T5 to T6, maybe), rather than upgrading the whole camper – even changing base vehicle brand along the way.