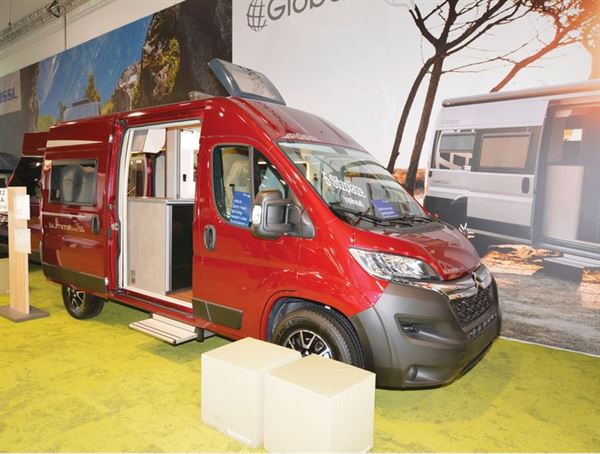 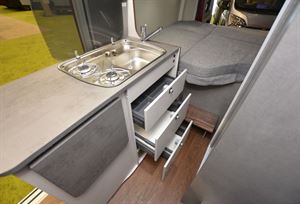 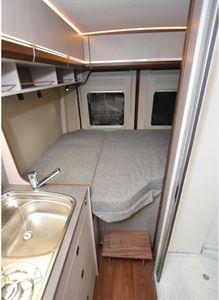 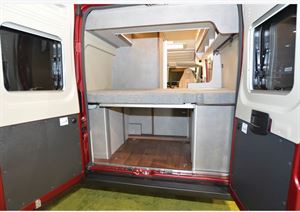 Not so long ago, every Fiat or Peugeot-based campervan had a fixed overcab shelf – a useful space to dump a few bits of clobber and, maybe, the table. That was simply how they came from the Sevel factory and the only difference between converters was whether it was left as a shelf or boxed in as a cupboard. Either way, you had to stoop as you stepped from the living area into the cab.

Then came overcab sunroofs and full headroom up front, an innovation brought to you by Adria, Dreamer and Malibu and now widely copied by makers all over Europe and in the UK. But not everyone wanted the window, or Skyroof as it’s often called, it seems, so some manufacturers added the option of a full-height walk-through without the glazing. Surely, that’s every base covered. Not quite.

At Düsseldorf, Globecar introduced its MultiRoof, which gives you a shelf when you want it, or full headroom when you don’t. The shelf is hinged, so you can raise it out of the way, or it removes completely. It certainly adds flexibility but, when used for storage, it could do with a luggage net to keep your gear in place.

The MultiRoof is introduced on a sole model, the new Summit Shine 540, which joins the existing Summit Prime and Elegance ranges. In the UK, it will be Fiat or Peugeot-based (rather than the Citroën seen here) but, badge aside, this model is only available as a medium-wheelbase camper.

There’s new Mokka décor inside with stylish pale grey handleless cupboards featuring dark wood strips, while the Grigio Lucente upholstery also makes its debut here. The layout adopts the classic transverse rear double bed (1.93m by 1.40m max, narrowing to 1.17m), but this isn’t just a copy of Globecar’s other 5.4-metre models. Of course, it still has the large rear under-bed storage area, too, which here measures 1.10m by 1.03m with a height of 710mm.

The biggest change, however, is obvious as soon as you slide back the side door and see just a single rear travel seat. It’s a very comfortable passenger seat but, more importantly, it opens up extra floorspace – great if you have a dog, and it generally increases the feeling of space. A fourth, removable travel seat can also be added as and when required (as an optional extra).

Then there’s the Easy Move table, which is described as having a ‘travel function’. Instead of the usual semi-permanent table, this one folds flat against the wall when not in use, again increasing the impression of space. It also has a flap that creates a small coffee table, so it’s a very neat bit of design.

There’s a novel twist to the kitchen, too. The extra room created by the single rear seat allows the galley’s folding worktop to extend across the width of the camper, rather than adjacent to the sliding door. That gives the chef a surprisingly expansive L-shaped area in which to work and preparation space is increased further by the use of a combined sink/hob unit rather than separate appliances. There’s no oven, but the kitchen has three drawers for storage and the 100-litre compressor fridge has a door that opens from either side. As it’s positioned at the forward end of the galley, it’s well-placed for access from inside or out.

The washroom is a great bit of design, too, with a sturdy swing wall that moves the counter-mounted basin and the curved wall with mirror behind to the right, above the loo (the superior Dometic model here). This installation feels a lot more durable and sturdier than some and it even incorporates a shelf for shampoo, etc, in the shower.

Finally, you can expect added spec on UK models and the usual Globecar quality.