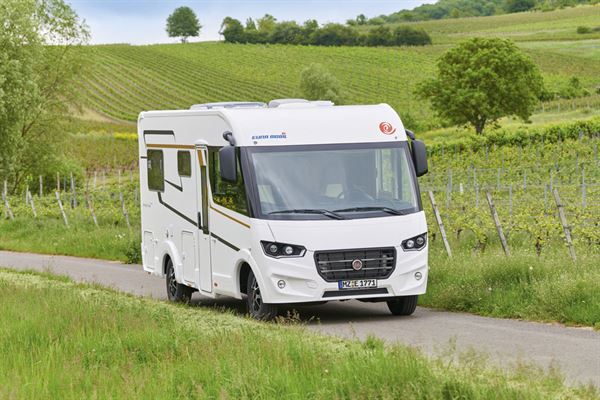 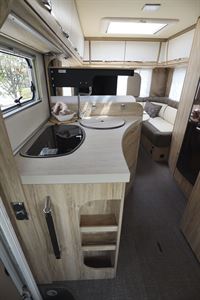 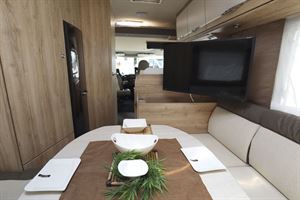 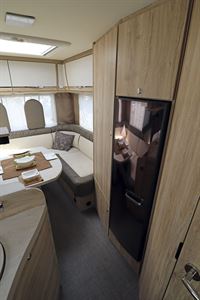 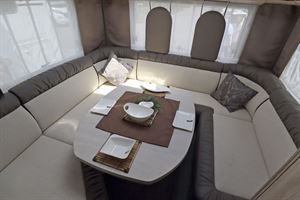 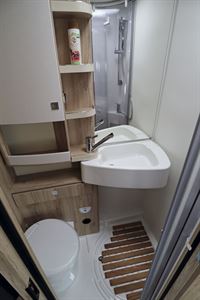 For the 2019 season Eura Mobil introduced a new generation of 3.5-tonne A-class models called Integra Line. Taking styling cues from the flagship Integra range, its baby brother was designed to be instantly recognisable as a product of this long-established brand. Floorplans were inherited directly from the Profila RS low-profile line-up.

On the outside the quad headlights are optionally available as high-powered LED units which emit around 30% more light, while the L-shaped tail lights draw inspiration from sister Integra. Habitation windows are of the framed, flush-fitting type.

As a premium model, the Integra Line also comes with an electrically operated waste water drain valve (the tank itself is in an insulated and heated tray) and the option of powered raising/lowering for the cab’s drop-down bed. Furniture comes with a choice of the wild oak grain of the Chalet look or a darker, high-gloss finish.

Bodywork is subject to a 10-year guarantee against superstructure leaks and there’s a three-year warranty on the furniture. Walls are wood-free and cabinetwork construction includes aluminium profile reinforcement.

Now, for the 2020 season, the Integra Line gets a more compact, 6.5m model for the first time. Unusually, this is a rear lounge layout – something that has long been offered in Eura Mobil’s portfolio. And the timing couldn’t be better, with rivals from Bürstner, Rapido and Roller Team being around a metre longer and Hymer’s DuoMobil having been discontinued.

Despite its compact size for an A-class, the 650 HS feels spacious. It also boasts the sort of wrap-around seating previously only seen in much larger motorhomes (like the Carthago Liner-for-two) where the sofa stretches not just from the nearside along the back wall and around the offside but also incorporates a rear-facing section, too.

With windows on three sides and a typically German fixed pedestal table, there should be room for four or five people to dine. Between the lounge and the galley, facing rearwards, is a slide-away TV position – a 32in screen is available as part of the Multi-Media Pack.

There’s externally accessed storage under the rear seating, too, and, although this low-level area isn’t a garage-like space, it will accommodate compact outdoor tables and chairs and can be loaded from either side. There’s more stowage capacity in the heated double floor as well.

While longer end lounge models offer extra travel seats up front, the compact Eura Mobil has optional third and fourth belted positions in the rear. These are made possible by the seatbelt anchoring frames with aluminium profiles inside the walls. No storage is lost when the extra travel seats are specified but sitting so far back, with reduced forward visibility, suggests these seats will be for those only requiring occasional passenger-carrying potential.

The kitchen has an unusual curved front and plentiful worktop in front of the burners-in-line hob. Opposite is a tall ‘n’ slim 140-litre fridge. Then, on the nearside, is the washroom with a semi-separate shower that’s made more spacious by deploying the swivel washbasin.

With its high spec and full winterisation, plus 6.5m length and rear lounge, this newcomer has a rare mix of talents. It’s also well-placed to take advantage of the lack of British-built rivals.