A new name might struggle in this crowded sector of the market without the backing of a major group like Erwin Hymer behind it. Here, there a few features that are a surprise considering the price, but space around the island bed and lounge seat heights need careful consideration. In the end it may come down to whether you fall for the fairly strikingly bright interior décor 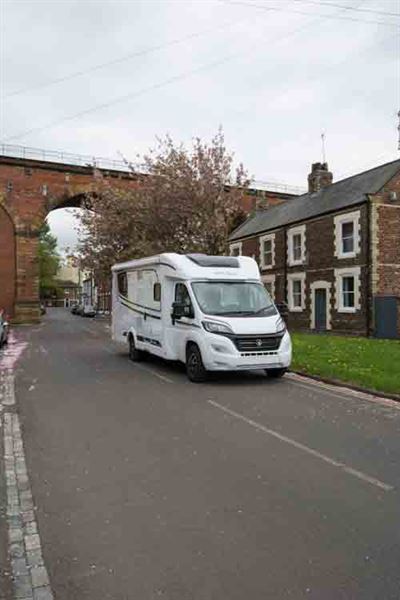 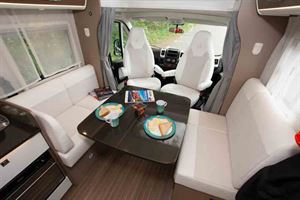 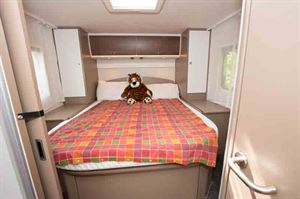 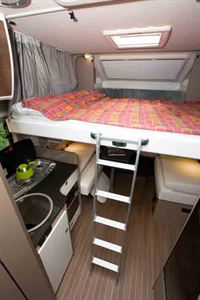 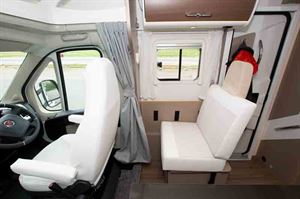 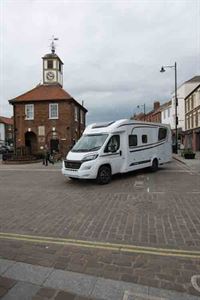 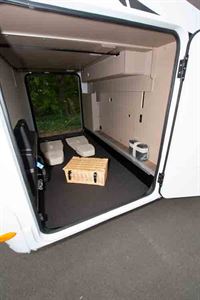 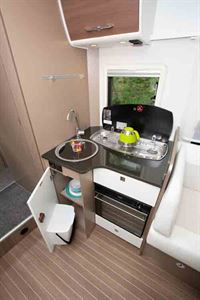 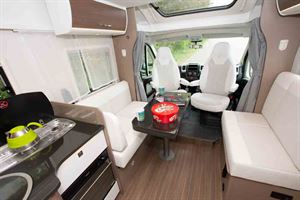 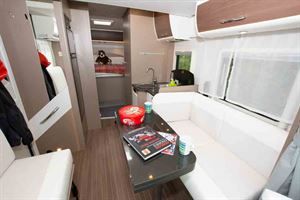 Named after the ancient Etruscan civilization in northern Italy, dated from between 900 and 400BC, Etrusco motorhomes are anything but old in design. In fact, this new Erwin Hymer Group brand was introduced to sprinkle a bit of modern-day Italian panache – or Mediterranean, elegant design in the company’s words – into the entry-level coachbuilt sector.

In fact, originally this brand was destined to be sold only in France, Spain and its home market. However, three years on from the brand’s debut in 2016, the first right-hand drive models – built alongside Laikas at a state-of-the-art factory in Tuscany – are coming here.

If you know your motorhomes (and German motorhomes, in particular) you’ll soon spot that these are not all new designs but share much in common with Erwin Hymer’s other budget brands, Carado and Sunlight. However, the interior scheme seen here would be too brave for Sunlight, let alone conservative Carado. And while the range of eight low-profiles and three A-classes broadly mirrors floorplans in those two portfolios, the T 7400 QBC tested here has a new layout which was only introduced on the continent in the spring (and currently has no Carado/Sunlight equivalent). Predictably, the change is in the lounge area, where side settees replace the usual half-dinette – it’s a trend across a whole load of imported low-profiles for 2019

A low profile motorhome on a Fiat Ducato Camper chassis

On the outside, this is a thoroughly conventional (but not unattractive) low-profile motorhome on the usual Fiat Ducato Camper chassis (with wide rear track). Despite that, the floor level seems quite high and the entrance is 630mm above the road.

You’ll need to use the extending (electric) step every time, which reduces the first climb to 350mm. Don’t forget to retract it before you drive off, though – actually, the buzzer won’t let you but it doesn’t auto-retract.

Looking more closely at our test motorhome revealed mixed messages as to its position in the market. The visible fixings on the cab-to-body mouldings and the lack of a window in the habitation door look rather entry-level.

Conversely, the 16in alloy wheels and the flush, framed windows look decidedly upmarket. But here we’re into the realms of optional extras. The Chassis Comfort Pack (priced at £1,238) is not only responsible for the sporty rims but also the leather steering wheel, chromed instrument rings, Tecno (aluminium look) dashboard trim, LED daytime running lights, black headlight frames and matching gloss grille. That roll-out awning is another extra (£884), as are the high-level mouldings on the rear (£353).

Unlike some models, however, you shouldn’t have too many concerns about options eroding your payload. The standard vehicle has a 610kg capacity on a 3,500kg chassis but that rises to the best part of a tonne with the 3,850kg gross weight seen here. The heaviest options (the drop-down bed at 44kg and electrically adjustable rear bed at 30kg) don’t make much of a dent in that.

The rear garage is limited to 150kg and has a maximum interior height of 1.19m (excellent for an island bed layout) – that’s with the bed raised up; in its lowest setting (or without the £884 powered height adjustment) it’s still a whisker over a metre. Here, there were two large loading doors (each 1.18m by 0.96m) but the second one is another extra – at £318.

Standard features are the heating, lighting, mains socket and tie-downs in the garage, as well as a loose non-slip floor covering, but you don’t get a spare wheel (though there’s space to carry one instead of the Fix ‘n’ Go kit).

Staying on the outside, the gas locker is conveniently low but a narrow hatch could make changing cylinders awkward.

If you’re going down the route of a 3,850kg motorhome and plan to use the increased payload to the full, then the uprated 150bhp engine fitted here seems a sensible choice, too. Significantly, it increases maximum torque from 320Nm (of the standard 130 Multijet unit) to 380Nm. On the road this motorhome not only felt as it was reasonably gutsy but surefooted, too. And although the conversion wasn’t silent, rattles were minor on the country roads around Darlington.

Inside the cab, the extras that come with the Chassis Comfort Pack stop the dated Ducato interior looking too basic, but you’ll still need to fork out more for a radio, sat-nav and reversing camera.

That said, the overcab sunroof, ESP, Traction Plus, cruise control and cab air-conditioning are all standard. As are height-adjustable driver and passenger seats with twin armrests (although their covers are a bit baggy).

If you’re happy with a more conventional, continental-style lounge, the T 7400 QB is the same price as this new QBC version. However, many British buyers are likely to be swayed towards the more open-plan feel here. It certainly feels spacious, with the very light décor (lots of white with just dark wood top lockers doors breaking up the mostly white scheme), fold-in-half tabletop and the opening overcab sunroof emphasising that impression.

There’s good artificial lighting, too – four spotlights are mounted in the underside of the drop-down bed and two more (with slight directional variation) sit below top cupboards. The net curtains are typical of an imported motorhome but the white upholstery (called Piemonte) won’t suit those with pets, children, or partners who like chocolate, red wine, ketchup… Fortunately, there’s an alternative scheme (Andorra).

Whichever fabric you choose you’ll notice the difference in floor height between the cab and the lounge, which leaves the sofas very high off the floor (at 580mm). Even the longest legs are likely to dangle here and, if you slide to the front of the seat to compensate, you’ll find the edge of the cushions unsupported.

For relaxation the front seats rotate through a full 180 degrees, so your socks can go up on the sofas, but sitting around the table, you’ll wish for a raised floor in the lounge. You’ll not yearn for more tabletop, though – it unfurls to 820mm by 850mm – which is banquet-sized, although it’s less stable on the extended side. The table slides fore/aft but only has very limited side-to-side movement and doesn’t twist. It can comfortably be reached from the settees or cab seats.

Like other newcomers of its ilk, the Etrusco has settees that also convert into two forward-facing seats for a couple of rear passengers. There are slot-in metal-framed backrest supports with integral headrests by Aguti (best kept in the garage) but no extra cushions are required. A pair of cushions is left over each side, though, in travel mode.

Now, seat height is not so much an issue as adult legs can reach the higher cab floor. These are surprisingly good travel seats and there’s a sliding window on the offside, too, for fresh air as you tour.

The fridge/freezer is the star kitchen feature

The 167-litre fridge/freezer with automatic energy selection is the star feature of the central kitchen. It sits opposite the main galley unit, where a three-in-line hob and slot-in sink cover ensure that the chef has some room to work.

There’s a good quality metal tap here and two 230V sockets but not a huge amount of work surface. A Thetford Duplex unit is a practical solution to the British desire for an oven/grill, especially as its mounted low. There’s a large cutlery/utensil drawer above and a second shallow drawer below (at floor-level).

Alongside, the cupboard has a waste bin on the door but you’ll need long arms to reach right to the back in here – it’s 590mm deep.

There’s more cupboard space under the fridge, while the TV locker is atop the cooler. Here, the telly is rather high up but it can be angled down towards the lounge seats – or better, watch it from the swiveled cab seats or even from the drop-down bed.

The front bed is manually operated and very easy to pull down from the ceiling for use, but we found that it wouldn’t raise and latch securely with the ladder on top of the mattress, so you’ll probably need to store that in the garage. Unlike many other drop-down beds, you don’t need to move any of the seats cushions below in order to bring down the bed.

This mattress is a good size, especially length (1.93m) and it appeared very comfortable thanks to its Clima Plux springs. There’s 600mm of headroom, with a roof vent directly above (the influence of a hot Italian climate?) as well as a large kitchen skylight and the overcab sunroof adjacent, but only the most rudimentary of lighting is fitted for sleepers here. The bed also sits partially over the galley and you’ll have to limbo under it to use the doorway.

The main bed has just enough room to sit up without headbutting the lockers above and the mattress felt supremely inviting after long day battling up the A1 through thunderstorms and hail – it’s not overly firm, as in some German motorhomes.

The corners at the foot of the bed seem less rounded off than others, too, with decent room to manoeuvre yourself while undressing, even when the sliding doors between bedroom and en suite are closed. But then you notice that the bed is only 1.82m long (a fraction less than 6ft) – at least it is until you slot in an infill cushion to stretch length to a super-generous 1.98m (when it becomes difficult to squeeze between the mattress and the washroom walls).

Unusually, the bedside wardrobes have shelves as well as hanging rails, but these can be removed to increase hanging height from 530mm to 890mm. Pleated blinds are another surprise (bearing in mind the price), but you may be disappointed to find just thin curtains around the cab, not Remis blinds.

Step into the rear bedroom

The rear bedroom/washroom area is up a substantial step (200mm) from the lounge/galley and you’ll find a nearside loo compartment and offside shower. The toilet door does the usual trick of closing off the en suite from the front of the motorhome and also has a full-length mirror on its reverse side.

The toilet area offers a decent amount of space, with adequate leg and shoulder room when seated, even with door closed. There’s useful high and low-level storage, including flannel and towel hooks and even a 230V socket, while both shower and toilet areas have a roof vent.

The separate shower also comes with a duckboard and a large clothes drying rail, two drains and headroom of 1.89m. The only thing missing is a basket or shelf for shampoo.

In fact, the en suite works well as a private space across the whole width of the motorhome, accessible (and private) from both sleeping quarters at the front and rear.

If you enjoyed this review, you'll find more like it every month in MMM magazine and What Motorhome magazine.