This is an unusual find – a front-lounge Sevel (Fiat/Peugeot/Citroën) van conversion with full-length single beds and four travel seats. It benefits from Devon’s usual robust construction (but with more modern furniture), plenty of kitchen workspace, a useable washroom and loads of payload but storage space is limited. Excellent value, especially in pre-registered form. 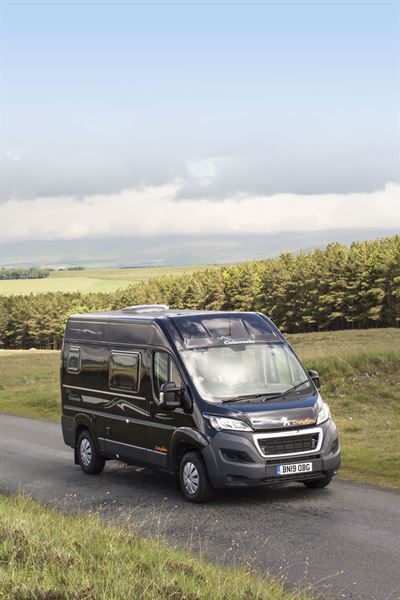 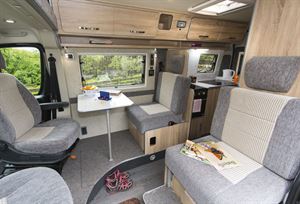 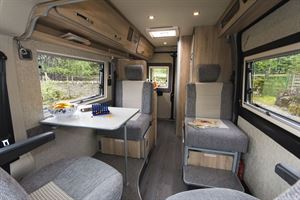 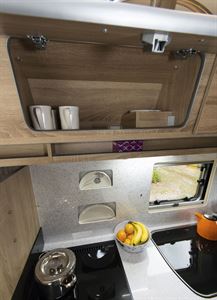 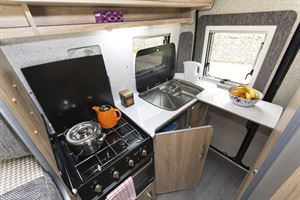 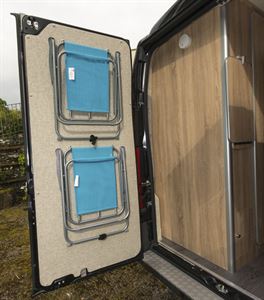 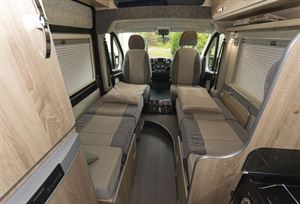 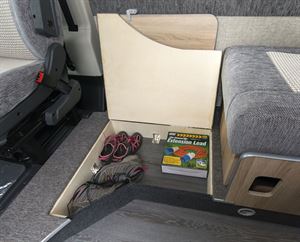 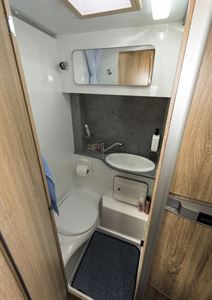 Compact front lounge van conversions have long been a mainstay of the British motorhome scene. This layout’s popularity has waned in recent years, with more emphasis on rear lounge models, but Devon’s 5.4-metre Colorado and six-metre Arizona show that the concept still has appeal.

Devon, based in County Durham since 1996, unusually, has converted all of the key base vehicles (though its current range does not include VW or Renault). In its Ferryhill factory and showroom you’ll see Mercs (Vito and Sprinter), Fords (Transit and Transit Custom) and the Sevels (Fiat/Peugeot/Citroën) in three different lengths. Plenty of choice, then!

The Colorado, based on the medium-wheelbase Sevel, comes with either three or four travel-seats. The traditionally-designed three-seater has an offside settee, combining with the nearside rear travel-seat to form a six-foot-long transverse double bed. But the four-seater, tested here, has a more novel layout.

The medium-wheelbase Sevel (here a Peugeot Boxer), is an obvious choice for a compact camper, being straight-sided and wide enough to give adequate space for furniture, occupants and holiday clobber. It’s also robust and (after over a decade of production) most, if not all, of the design bugs have been ironed out. Importantly, it’s reasonably cheap for the converter to buy, straightforward to work on and in plentiful supply.

It does come with one major headache, however – the height of the cab seats, up on their platform, compared to the lower, main body of the van. That’s why most front lounge designs on this base vehicle have the same transverse bed layout as Devon’s three-seater Colorado. But, what if a six-foot bed is too short? Or if you want to carry two rear passengers, not just one? Then that design isn’t for you – and there aren’t many alternatives.

To conjure up a practical layout allowing cab seats to be incorporated into full-sized, longitudinal beds, requires some ingenuity. The resulting layout includes two rear travel seats set higher than normal – the offside one on a curving plinth which ties in with the cab platform and the nearside with a built-in footrest to avoid dangling legs. These combine with the swivelled cab seats to make a pair of single beds.

To the rear, as in the traditional three-seater model, there’s an offside kitchen, with wardrobe, fridge and washroom opposite, and an aisle giving access to the rear doors.

Back to the base vehicle and its specification. This is a Boxer in Peugeot’s Professional trim, which includes most of the luxuries we now consider essential. It has a DAB radio/CD with Bluetooth, sat-nav and steering wheel-mounted controls, cab air-conditioning (including the glovebox), cruise control, rear parking sensors and electrically-operated, heated door mirrors. It doesn’t have a passenger airbag though, and it’s not practical to retro-fit one.

On the plus side is the price. Because these are pre-registered vans (this one was a 19-plate, with 19 miles on the clock), Devon is able to offer the Colorado at £39,500 – tremendous value for money when you check the spec. However, if you require a passenger airbag (or other factory-fitted options) and first-owner-on-the-logbook kudos, Devon can order you one specially, but it’ll cost more.

Driving the Pug, or its Fiat/Citroën siblings, is so familiar to us now that it’s like wearing comfy old shoes. If you’re new to motorhoming, it’s a very long-established design (and, for general road manners, doesn’t compare favourably with more modern competitors like the VW Crafter or Ford Transit. However, it has safe and secure handling and the suspension, whilst firm, deals adequately with potholes and doesn’t lean much in corners.

The steering wheel only adjusts for reach, not rake, so the driving position is compromised for some drivers. The handbrake is a stretch down to the right and is easy to leave partially applied (that’s why there’s an alarm), but its position means it doesn’t interfere with swivelling the seat. The dash-mounted manual gearstick has a clunky but foolproof action through the six forward gears, and there’s good forwards visibility, plus huge ‘elephant ear’ door mirrors. The main snag is the thick A-pillars, which can hinder vision to the right at junctions. Overall, it’s an undemanding and easy drive, and understandably popular.

Peugeot’s 2-litre engine produces 130bhp, pulls strongly and is generally considered more refined than its counterpart in Fiat’s Ducato; unlike the Fiat, it is only available in manual form. Economy-wise, our experience (and the trip computer’s readout), indicates the early thirties in mpg.

The Colorado has extensive decals, contrasting sharply and colourfully with the Graphite metallic paint of the test vehicle. There’s no mistaking it’s a Devon, nor which model. One of us liked them, the other didn’t!

We both approved of the all-round mudflaps, Devon-branded wheeltrims, the standard spare wheel and the large (25-litre) underslung gas tank – much more economical and space-saving than cylinders.

Moving inside, through the sliding door and via a large, automatically retracting step, the nearside seat has an integral storage box footrest, but it still leaves an aisle around 50cm wide curving towards the rear and with a full 1.90m headroom. The raised area between the cab seats and offside rear seat has considerably less headroom, but you’ll only be sitting here.

Décor has changed from Devon’s traditional tan beech woodwork to a much more modern warm oak, called Bardolino, which has suddenly burst onto the British motorhome scene. Used by several converters, they all remark on how robust it is.

Here, it goes well with the upholstery – a high-quality tweed with cab seats covered to match. The table and work surfaces are a smooth glossy white with random silvery chips – easy on the eye and easily cleaned.

The lounge has two large top-hinged windows with concertina blinds and flyscreens and a medium-sized skylight, plus four ceiling LED light clusters, two more over the cab seats and three adjustable reading lights. There are no cab curtains, just internal insulated screens.

In practice, the lounge works pretty well, with comfortable seating and the wall-mounted table sited between the driver’s seat and rear offside seat. Our main reservation is the footrests on the nearside – the cab seat has a very narrow section of plinth on which to rest your heels, whilst the rear travel seat’s dedicated footrest doesn’t extend far enough forward for a period of relaxed lounging. But there’s a solution – as an extended footrest, we stood our cheap, folding step between the seats – sorted!

There was no aerial point or socket for a TV but, if retro-fitting, the TV would be wall-mounted above the nearside rear seat.

To make the beds, the rear seats move forwards, which is an acquired knack. Reach through a hole in the side of the seat, unscrew an unseen catch and release the seat to slide forward half-way; then find the catch inside and release this to complete the job. It’s a potential thumbnail-breaker, but becomes easier with practice and returning it to seat mode is simple – just give the seat a hearty shove backwards until it clicks home.

Next, slide the backrest cushions off their frames and lay them down, insert a large infill cushion at the top of each bed (unfortunately, these cushions occupy most of the space beneath the nearside seat) and you have two flat, comfortable single beds, each 1.90m long and 62cm wide. And the aisle allows easy access to the toilet facilities at the rear, without disturbing the other bed occupant.

A bonus of this layout, even in a compact van, is the space left for the kitchen and washroom. The offside galley has room not only for a proper cooker with three burners and a grill/oven under a glass lid, but also a large stainless-steel sink with draining board – a rare and welcome feature, though, ideally, we’d have the drainer to your right, bowl to the left, as most Sevels stand high to the back on their suspension. Increasing the already adequate worktop is a wall-mounted, hinged surface which drops across the aisle.

Storage includes two high-level cupboards (one boxed-out for cups and bowls, but this does waste precious space) and three in the unit itself, plus a small cutlery drawer and, at the rear, a vertical box (for small umbrellas?). The three-way, 85-litre fridge opposite, below the wardrobe, has a removable freezer compartment and there’s a mains/12V socket under the rear end of the worktop, with space for the kettle adjacent.

All good? Nearly, but the main cupboard in the unit is hinged to the front, so, if the drop-down surface is deployed, the cupboard is inaccessible – that could be remedied by re-hanging the door. We found the high-level cupboards somewhat small and the long shelf immediately below, whilst looking good, is deceiving, being too shallow, and obstructed by the many large plastic fixing blocks inside. So, it’s frustratingly difficult to find things to fit – our little tea-caddy, for instance, was too large.

The washroom has the excellent Thetford bench toilet with its own flush-tank, a decent-sized basin set in a shelf with cupboard below, and the shower tray forms the floor, draining to the front. There’s a mirror-doored wall-cupboard, toothbrush mug, soap-holder and towel ring, and the swivel tap doubles as the showerhead.

The underslung fresh water tank holds a fairly modest 66 litres, so showering needs to be frugal and you’ll have a clingy curtain to contend with. Our main concern, though, was the restricted space for removing the large (and heavy when full) toilet cassette internally into the aisle. Despite requiring another hole in the motorhome’s side, we’d prefer an external door.

The Colorado is a small motorhome, but is still built on the 3,500kg chassis. When it’s empty, Devon says payload is a massive 880kg so, even allowing for a driver, fuel, water and gas, that’s very substantial. Storage available, however, is restricted. The bed system necessitates the loss of under-seat space to hold infill cushions, the other travel seat base holds the Combi 4E heater/boiler, and the slim overcab store is largely filled by the interior cab screens.

So, apart from the kitchen cupboards, and the wardrobe, whose rail has a modest 69cm drop, there are only the two overhead cupboards and a small cubby above the offside lounge, plus a couple of shallow cubbies over the sliding door and shallow storage under the raised off-side floor.

Two camp chairs (included in the price) hang inside the nearside rear door, but we suspect those bed infill cushions will lose their home and migrate around the vehicle.