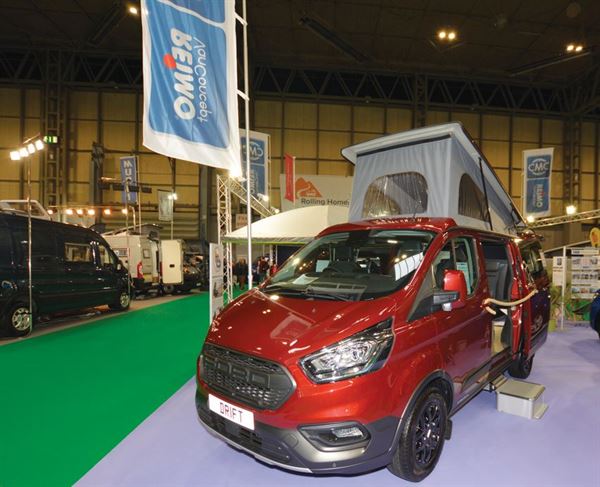 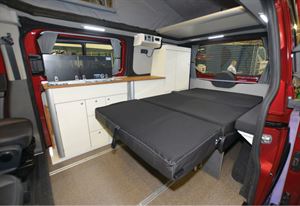 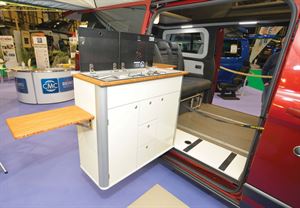 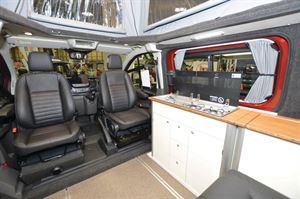 With an increasing number of converters – and even major manufacturers, like Auto-Sleepers and Swift – building campers on the Ford Transit Custom, it’s not easy to stand out from the crowd. However, the HemBil Drift has a feature that you won’t find elsewhere.

What, at first, looks like a conventional side kitchen layout campervan, actually has twin sliding doors, but the reason for that isn’t down to offering a choice of access but to allow the galley to swing out through the offside door for al fresco cooking. It’s super-simple to operate, with the galley bolting to the floor to lock it into either its inside or outside positions.

Of course, we’ve seen the Drift conversion before, as it was originally launched on the VW Transporter. You can still have the Vee-Dub version, in short or long-wheelbase forms, but the Drift is now also offered on the Renault Trafic (short or long) or, as shown here, on the Ford Transit Custom (SWB only). The Ford is said to save around £6,000 compared with a VW with equivalent equipment.

Here, the conversion was also based on a Trail spec van – an £822 option. That gives it the rugged look, with ‘FORD’ emblazoned across its grille and Ebony 16in alloy wheels, as well as metallic paint (£1,675 including roof colour coding) and contrasting lower panels. Combined with this almost off-road appearance, the Trail gets a mechanical limited-slip differential, which will send power to whichever front wheel has the most grip in difficult conditions – useful on wet campsite grass.

Considering that CMC’s relationship with Reimo goes back to 1988, as the original UK importer of the German camper component brand, it’s no surprise to see that this respected firm supplies both the elevating roof and the sliding seat system for the Drift. As standard, this camper comes as a five-seater with three seatbelts on the rear bench, but it’s possible to turn the campervan into a seven-seater with additional removable seats.

The Reimo bench fitted here is 50mm narrower than the one used in the VW version of the Drift but it actually forms a wider bed because an extra cushion above the nearside wheelarch forms part of the mattress. As a result, the bed here measures 2.01m by 1.34m.

It’s the kitchen that’s the USP, though. The part that moves incorporates the Dometic two-burner hob and sink combo, as well as gas storage, cupboard space and three small drawers. When rotated for use outside, there’s also a worktop flap on the end of the unit. Then, in the rear, fixed part of the galley, you’ll find a Vitrifrigo 20-litre top-loading fridge, which will hold more than you might expect. In the rear corner is a large shelved wardrobe, with the 12-litre fresh water carrier below.

Open the tailgate and you’ll see a very generous boot area – above the rear mattress it’s 1.34m wide by 790mm deep, with yet more room for outdoor gear below. Or you can fold the mattress section upright to allow taller items to be carried, while of course the back seat can slide into multiple positions, increasing load carrying capacity still further and bringing passengers closer to the cab.

To see an earlier, in-depth review of the HemBil Drift on a VW, click here.