When so many motorhomes look so similar, it’s great to see some genuinely new thinking from those masters of innovation at Chausson. For many couples, the new X550 will be the ideal combination of campervan size and motorhome comfort. It’s less successful as a four-berth but we love its comfortable lounge, great drop-down bed and generous washroom. It’s even better than we hoped it would be! 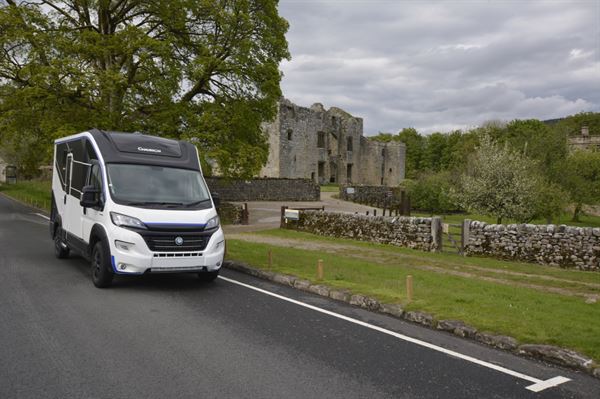 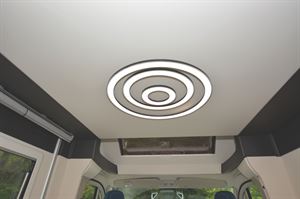 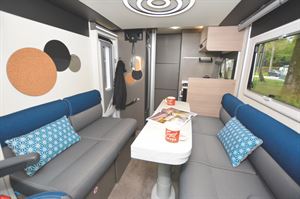 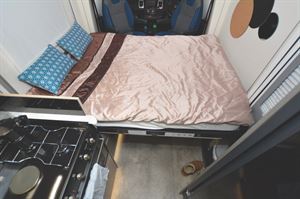 It’s been a long time since I was this excited about testing a new ’van, but then the Chausson X550 isn’t just another new model. Like the original Hymer Exsis of 2003, Pilote Group’s CityVan in 2007 and the Bürstner Brevio in 2012, this is a leisure vehicle that aims to create a whole new category.

Manufacturers have long dreamed of the holy grail – a campervan-sized vehicle with full motorhome facilities that could appeal to both camps – and, with campervan sales booming across Europe, now could be the perfect time to launch such a crossbreed, the Labradoodle of leisure vehicles.

Chausson certainly thinks it has combined the best of both types in its X550 – and added some funky design flourishes to boot.

Technically, this is a low-profile motorhome with the usual sandwich construction of GRP skinned walls and Styrofoam insulation.

It’s just a few issues of MMM (or 5cm) wider than a Fiat panel van and exactly the same length as the long-wheelbase Ducato, but you’ll never mistake this for a van conversion – or any other motorhome.

The cab is instantly recognisable as the ubiquitous Sevel light commercial but the bold black and white colour scheme with dark alloys and matching wheelarches has a hint of off-roader about it.

The rear end’s styling is particularly brave and there’s definitely a sense that the X550 is chasing a younger audience than more traditional motorhomes.

It’s not just the looks that are new – the Chausson’s roof is a one-piece cap made from polydicyclopentadiene (PDCPD), which is more usually seen in the construction of tractors, buses and trucks.

The French firm believes that this is the material’s first use in a motorhome and points to advantages in terms of high impact resistance and stability in extreme temperatures.

Of course, it still features typical, err, features such as the offside toilet servicing hatch and the nearside gas locker (for just one cylinder – you’ll use less propane because the heating is a diesel-fired blown-air system from Webasto).

There’s no garage but a tall exterior locker (330mm by 760mm by 1.15m tall) on the left-hand side, above the back wheel, will serve for outdoor chairs and the like – or at least it will if you leave the bulky infill cushions for the lower bed at home.

Oddly, though, considering the X550’s sporty looks and high-spec, there’s no external shower or barbecue point.

Get behind the wheel (leather-wrapped as standard) and you’ll find a full complement of kit to match the X550’s ‘Exclusive Line’ title. Cab air-conditioning, cruise control, driver and passenger airbags, electric folding mirrors, Hill Holder and Traction+ are all included in the £58k list price.

There’s an Xzent DAB radio with 8in touchscreen, too, and its display doubles up for the reversing camera.

That makes going backwards easy, while going forwards is equally painless. The door mirrors are on the shorter arms of a panel van, so don’t increase the vehicle’s width like running with your arms spread wide.

In fact, in almost every way, this feels much more like a campervan to drive than a motorhome and I was oh-so-grateful for that when I ventured onto the single-track roads around the Bolton Abbey Caravan and Motorhome Club site.

Before that, I was equally pleased that someone at Chausson had specified this pre-production model with the Automatic Pack – that’s stop/start, a smart alternator, an upgrade from 140 to 160bhp and the nine-speed torque converter transmission.

At almost £4,500, it’s an eye-wateringly expensive option but one that I’d have with no more than a millisecond’s mulling over.

The base vehicle on the Chausson X550 Exclusive Line

The combination of the excellent automatic gearbox and the extra torque (400Nm plays 350Nm) make for a relaxing drive, whether you’re heading up the A1 or bumbling around the Dales.

I’d be far less bothered by the only other listed option for the X550 – the Safety Pack. This costs £1,341 and adds automatic lights and wipers, traffic sign recognition and a lane keeping alert.

There are no other factory options, although you might want your dealer to add an awning or bike rack when you get your X550 – which probably won’t be until late this year, at the earliest.

Open the habitation door (on the offside, like most imported ’vans, and with a low step and central locking, as well as a bin and flyscreen) and you’ll soon change your mind about this being a campervan.

The flat side walls, the sense of space and the facilities on offer all point to this being a proper motorhome. The loss of 20 to 25cm or so of width compared with conventional coachbuilts, which seemed so important on the road, now seems barely noticeable.

The lounge in the the Chausson X550 Exclusive Line

You can thank Chausson’s proven Smart Lounge for that. Its long side settees, combined with a table that folds to a slither and white walls to reflect the light, make you wonder if you misread the spec. Can this really be a 5.99m ’van?

Yes, not only is it ferry-friendly, but it has some unique touches, too. I love the circular ceiling light and the duo-tone, almost denim-style upholstery, although I wasn’t quite so sure about the lack of an offside lounge window where the circular theme returns with a pin board and mirror.

At least the UK driver of an X550 retains good over-the-shoulder vision, which ironically on a French ’van could be a real downside in left-hand drive versions.

On site, the X550 lounge is a good place to spend time.

The settees are generous (especially on the nearside, at 1.57m long) and seem to have just the right blend of sink-in softness, shape and support.

There’s plenty of light (natural via the overcab sunroof and artificial, including a row of pin lights over the cab) and the table is huge (1.10m by 660mm) when unfolded for gastronomic indulgence.

It’s height adjustable, too (just press a button on the front of the kitchen), so you can have it just the right level, whether you’re sat on the sofas or in the (slightly taller) cab chairs, typing on your laptop or tucking into a bowl of hot soup.

You could seat seven easily in this lounge if you’re feeling sociable, or simply rotate the front seats through a full 180 degrees and put your feet on the settees if you’re not.

In fact, the only aspect that might need to be addressed for some buyers is the rather lofty position of the TV station.

Perhaps, a height-adjustable TV bracket would be more useful than the second circular pin board/mirror combo here, although the coat hooks in the entrance area are a plus.

Another benefit of the Smart Lounge is its easy conversion from side sofas to a pair of forward-facing travel seats. The travel seat backrests are hidden under the settees and simply hinge up into position.

The seat cushions are then repurposed for their new role, with some becoming redundant (probably jettisoned to the washroom while you drive). You lose some under-seat storage to create space for feet but the gain is a couple of extra belted pews, complete with Isofix. Not sure I’d want to travel next to the windowless offside wall, though.

The X550 matches its seatbelt tally with berths for four – in two double beds, one above the other.

Berths in the the Chausson X550 Exclusive Line

The dinette bed is made by lowering the table and adding the two super-sized infill cushions (which we found stealing virtually all of that tall exterior locker space, which you can also reach from inside).

It’s a good-sized bed but much, much more comfortable is the Hideaway Bed above.

If you don’t need the downstairs bed, the drop-down double can be lowered right down to seat height, with easy access ensured by the fact that it’s now just 790mm off the floor.

Of course, if you’re using both beds, then the upper one stops at a higher position and a ladder is employed – either way, the Hideaway Bed not only shows Chausson’s expertise in drop-down beds (it’s so quick and easy to use) but it benefits from a new system, suspending the mattress on space-saving metal chords rather than the usual seatbelt-style straps.

Browse MMM's vast library of motorhome and campervan reviews by signing up to our online archive. You can use the search function to look up all the models featured in the magazine in recent years. Start by typing 'Chausson' into the search bar here:

So, the front of the X550 combines a lounge that belies the model’s compact dimensions with the first drop-down transverse bed in such a slimline motorhome.

But there’s more to impress at the opposite end of this new ’van.

The washroom in the Chausson X550 Exclusive Line

The washroom runs right across the back of the vehicle and, while it has its own sliding door, I rather questioned why because the wardrobe door does an even better job of closing off the ablutions space, turning it into a changing room as well and incorporating the large wardrobe, which offers an abundance of both shelving and hanging space.

For showering, a super-sized tambour door pulls around to create a cubicle of unprecedented generosity in such a compact motorhome.

The trendy-looking square showerhead gives a good spray, too, so you’ll never be tempted to walk to the campsite facilities instead.

Whilst the washroom is superb in most ways, it could do with a catch to stop the tambour shower screen migrating while you drive and the wooden duckboard seemed prone to tip up if you stood on one corner.

For some, though, the biggest issue might be the rather personal view you get in the tall mirror behind the loo when having a wee…

The kitchen in the Chausson X550 Exclusive Line

Maybe our Gallic neighbours are less prudish about such things but, in the kitchen, they’ve certainly addressed the desires of us ‘rosbifs’.

Not only does this galley have a Triplex cooker with oven and grill but it also includes a mains hotplate – something you almost never see in an imported motorhome.

The deep kitchen counter means there’s a reasonable amount of worktop area in front of the sink, while the Argo taps fitted both here, and in the washroom, add a touch of quality. The two soft-closing drawers (one kitted out for cutlery) also boast refined mechanisms.

There’s just one 230V socket on the front of the kitchen unit (two USBs, too) but it’s sensibly placed, while kitchen storage seems as good as you’d hope – and considerably better than you’d expect when it comes to cooled capacity.

The tall Dometic fridge/freezer is a 139-litre model with automatic energy selection.

More storage can be found beneath the seats, especially when they are in settee mode.

This includes a useful cupboard for shoes accessed directly from the entrance area, but it should be noted that the drop-down bed precludes any top lockers from being fitted in the lounge.

Under the offside sofa you’ll also find the gas/12V boiler and the 100-litre fresh water tank (inboard for the best winterisation). Overall, storage looks good for two, tight for four.