Featuring side-by-side washbasins in an area that completely transforms at night with the introduction of an island bed, this 778 is full of pleasing surprises 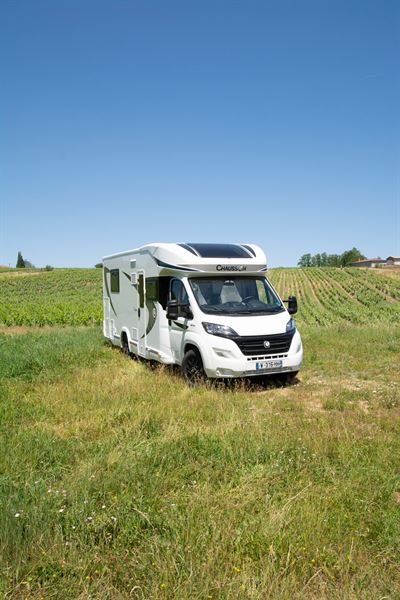 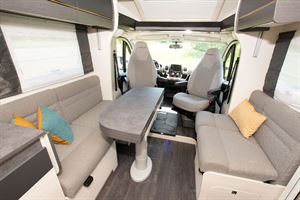 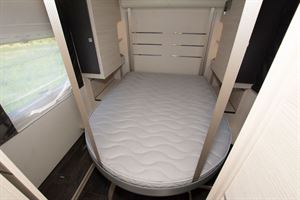 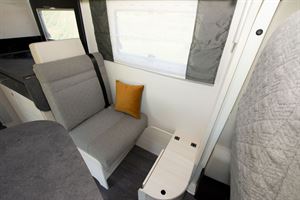 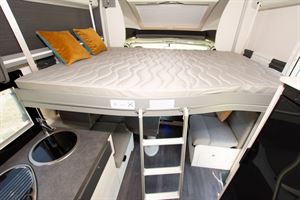 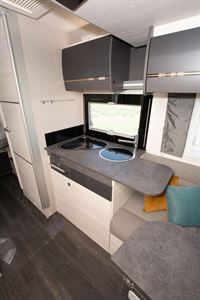 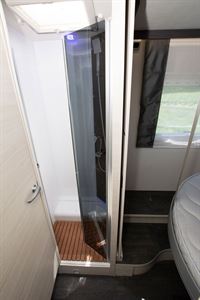 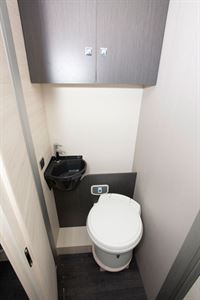 Here, as they say, is something completely different. OK, on the outside, it’s another Fiat-based low-profile motorhome (or optionally on Ford) that looks much like any other (especially any other Chausson), but go inside, turn left (towards the rear) and you are probably in for a shock. This year, the 778 is the new and unique model and its never-seen-before feature is a pair of washbasins side by side in a huge rear washing/changing area. That might seem like a monumental waste of space were it not for the fact that, at night, the same area becomes a bedroom.

The washbasins lower and an island bed powers down from the ceiling, completing a remarkable transformation of the space. In the day, two huge drawers sit below the pair of basins, there’s more storage under steps in the floor on either side and, beyond, you’ll find Chausson’s Easy Box system with three top-loading compartments (each 150mm deep). There’s lots of lighting set into the base of the bed above and a large folding mirror hinges down behind the basins. Adjacent are his and hers wardrobes (sitting in familiar bedside positions when the bed is lowered) and forward of this area are the separate shower and toilet.

The toilet compartment is quite small but actually includes a third (mini) basin – so you don’t need to raise the bed in the middle of the night to wash your hands. There’s no faulting the shower, however, which has 1.92m headroom, a roof vent, two drains, a duckboard and a fold-down rail for drying clothes/towels. A sliding door can close off the rear of the motorhome but space is tight around the foot of the bed on the nearside.

Otherwise, this now looks like a conventional end bedroom layout – except for the straps on which the bed lowers. The mattress measures 1.91m by 1.42m and is unusually high off the floor (970mm) but this isn’t an issue as there are three steps on either side. There are useful bedside storage recesses and two USBs on the nearside.

Up front, the Smart Lounge layout seems disappointingly conventional after the magic worked aft but the area works well as either parallel settees for four/five people or as twin forward-facing travel seats (complete with Isofix). The big table (1.00m by 0.82m) folds in half to increase the feeling of space and unusual bronze-coloured strips in the top lockers are a new feature for 2020.

Above, the optional Hideaway Bed makes the 778 into a comfortable four-berth, with an electric drop-down bed (1.89m by 1.39m, narrowing to 1.20m) offering 630mm headroom. You will have to duck under the bed to leave through the habitation door but, when the bed’s stowed, there’s 1.87m standing room in the lounge. Beneath the bed are also a new gloss black trim panel and a quartet of LED spotlamps.

The French-specification kitchen shown here looks a little basic but UK models include a Triplex cooker with oven/grill and there’s a tall fridge opposite. The model photographed also featured the Premium Pack (£2,200), which adds all sorts of goodies, from the shower’s duckboard to central locking for the habitation door, from cab blinds to external shower and barbecue facilities.