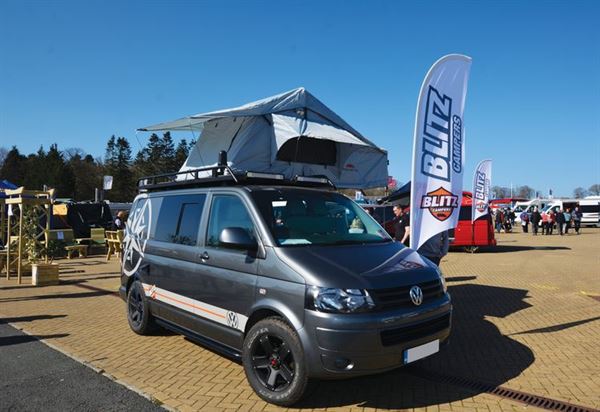 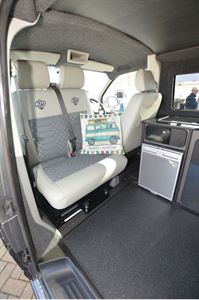 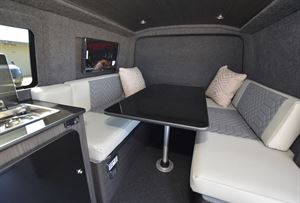 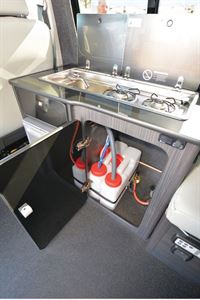 If you’ve started to think that VW campers all look much the same, here’s something to make you take notice. Spotted at the Yorkshire Campervan & Motorhome Show, this is a Transporter conversion quite unlike the others that were on show in Harrogate.

For a start, look at the price – just £29,995. But here, we need to explain, especially as that figure doesn’t seem to fit with an off-roader-style camper complete with 4Motion four-wheel drive. The conversion here, carried out by Blitz Campers of County Durham, is brand-new but the base vehicle is not. This T30 Transporter is a 62-plate vehicle with 156,000 miles on the clock – a lot for a campervan but all in a few short years’ work for a VW van – and the good news is that this example had just one owner prior to its conversion.

In fact, it became a camper as part of a lockdown project by Blitz when the company was unable to receive its usual visitors. It purchased a selection of used panel vans and converted them for stock, this VW being the first of its kind as Blitz had not tried this layout before. It wanted to create something different from the norm in this sector, which it certainly seems to have achieved…

Before we look inside, though, let’s examine the spec of this metallic grey VW. This is a T5, rather than the later T6, although the visual differences are quite subtle. VW aficionados actually refer to this version as the T5.5 as it’s the facelifted fifth-generation Transporter featuring the more refined 2-litre TDI engine (which replaced the previous 1.9 and 2.5-litre units from 2009). Here, it’s the 140bhp version with six-speed manual gearbox.

Chunky five-spoke wheels with Cooper Discoverer all-terrain tyres and bold graphics featuring a compass motif give a leisure look, but the aspect that you can’t miss is the Ventura roof tent, mounted onto a substantial roof rack.

Of course, this is accessed from outside, via a ladder, and, unlike a pop-top, it doesn’t create any standing room inside the camper. Where it scores over the more usual rising roof is the size of the bed, which, at 2.40m by 1.42m, is absolutely huge. The roof tent takes a little longer to open out than a pop-top, but this is also a considerably more cost-effective option and one that could be moved to another vehicle if you want to upgrade to something newer. With the tent removed, you still have a large roof rack and a rear ladder for loading up.

So, the main sleeping space means stepping outside your cosy campervan and, effectively, climbing onto its roof. There is, however, a second bed inside the campervan and this VW has only three travel seats – all in the cab.

The front double passenger seat is on a Rusty Lee swivel base, so it becomes part of the living area. The rest of the seating is more of a surprise in this size of campervan, however, as it’s in the form of a simple U-shape around the rear of this Transporter. There are no side, or even rear door, windows here, so it might seem a bit dark and gloomy – the only glazing is in the sliding door and, opposite, behind the galley. There are, however, spotlights in the ceiling and a TV is mounted on the offside wall.

The rear lounge comes with an island leg table and this is used to complete the bed. It’s not a very big bed, at 1.61m by 1.47m, but there’s decent storage under the settees.

Another issue is that headroom in the lounge is rather tight but a bigger concern may be that you can’t stand to use the galley. Spec, though, is typical for a VW camper – two-burner hob, sink fed by a 10-litre water carrier (with a second container for grey waste), and a Dometic compressor fridge.

Autoterm diesel-fired heating is also fitted here, along with a Sargent electrical control system and a 110Ah leisure battery.