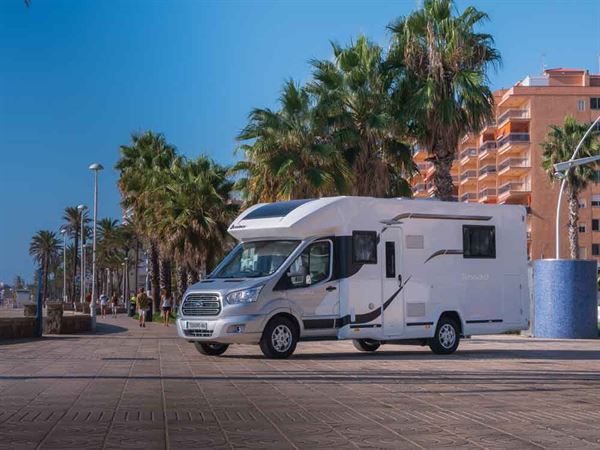 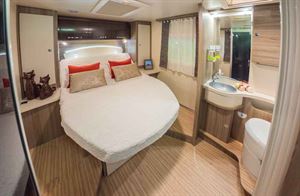 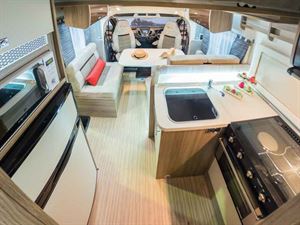 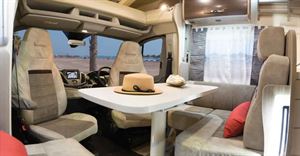 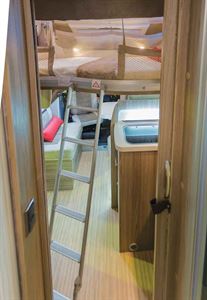 Much has been made of the anglification of Benimar’s range of Spanish-built motorhomes, with added microwaves, better cookers and a list of kit that would usually see you developing RSI from ticking so many options on the order sheet.

The Fiat-based Mileo range even arrived, from the off, with its habitation doors on the left. Every UK-bound Benimar now has a UK-handed floorplan.

The already well-appointed Ford cab gets automatic lights and wipers and a fast-defrosting windscreen. Then, from Benimar, additional features in the living area include rear speakers, removable carpets, a multi-position electric drop-down bed, iNet remote control for the heating (which is now a gas/mains Combi 6kW system), an extractor hood and a rooflight with fan, plus smoke and CO2 alarms.

On the outside you gain a TV aerial, external shower and barbecue points, rear corner steadies and a new ABS plastic moulded lower rear panel. And wrapping up a mighty impressive list of kit – none of it optional or in an expensive pack, remember – is a Trackstar Leisure Category 6 tracker with a year’s subscription; something that your insurers might well have insisted on anyway, given that this motorhome is worth over £55k.

The end bedroom, of course, is the reason to select this 494 and there are the usual wardrobes on either side of a bed claiming dimensions of 1.90m by 1.39m. The bed slides back to create a sort of chaise longue-effect in the day, and to create more floor space for undressing.

At the foot of the bed on the nearside is the toilet cubicle, behind a tambour door. As the new-look cassette loo here sits on a plinth you may want to check sitting comfort if you haven’t got long legs.

Opposite, the shower cubicle has a false floor over its shower tray when not in use, but there is no privacy screen between bed and shower. That may be an issue if the front drop-down bed (said to be the same 1.90 by 1.39m, although both beds narrow at the foot) is in use by friends or privacy-demanding teenagers.

Much of the rest is predictable stuff, from the L-shape of both lounge and kitchen to the fixed table and the overcab sunroof. Unusual, though, for a continental ’van are the microwave (over the fridge/freezer) and a cooker with mains hotplate.

Rarer still, of course, is the Ford cab – only Roller Team and Chausson (both also members of the Trigano Group) field Transit-based opponents. That’s a pity because the blue oval brings a more car-like cab environment, great Euro VI engines (especially as 170bhp is standard here) and even, now, an automatic option. That, alone, is a good reason to look closely at a Tessoro.

If you enjoyed this review, you can read more in the December 2017/January 2018 issue of What Motorhome magazine.