This latest Ford chassis – especially with its 170bhp Euro VI engine – is a real cracker. Benimar Tessoros look like they’re set to spearhead a bit of an attack on the market, backed by the mighty Marquis. 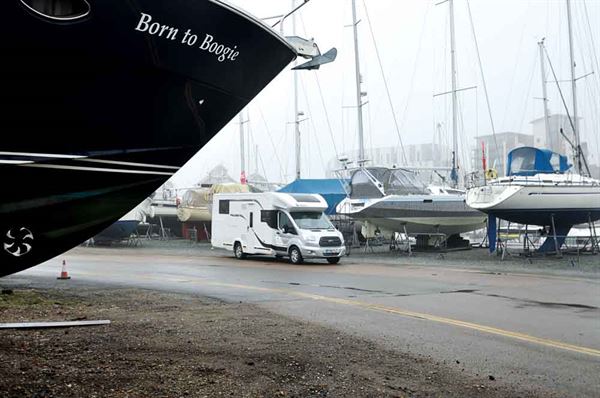 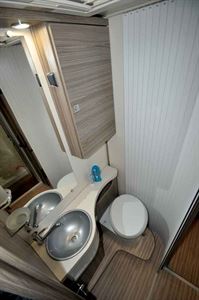 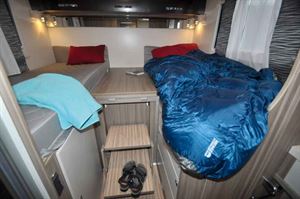 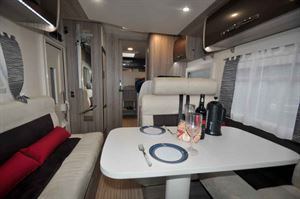 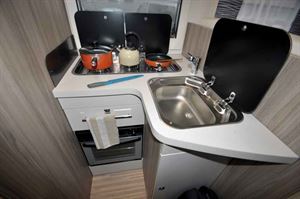 The Tessoro’s forward seating arrangement fares better than many. The rear travel seat can be made into a short, L-shaped settee when you’re on site. Opposite, there’s an inward-facing settee that will easily take two folk. In the midst of all this is a fixed pedestal leg table with a top that’s hinged in the middle – so, you can open it right out for meals, etc, or have it half-sized, which also means getting past it from cab to the rest of the living quarters is that bit easier. Despite height adjustment, you won’t quite get the cab seats up to the same level as the rest of the lounge.

The lounge is well served with LED illumination – strips to the undersides of the lockers and downlighters on the underside of the drop-down bed, where there are also lockers on both sides. There are single 230V and 12V sockets adjacent to the L-shaped settee, plus a double USB outlet in the moulding over the cab passenger seat. TV watchers shouldn’t be disappointed – there’s a fully height-adjustable holder for a flatscreen just inside the habitation door, where you also get further 230V and 12V sockets.

The windows aren’t the largest, but they do have cassette blinds and flyscreens, and there’s also that large opening sunroof over the cab, as well as a fixed window in the door. Talking of which, all the side windows are flush-fitting on the outside.

Truma’s Combi 4 pumps out the heat from its location in the settee base. It’s gas-only as standard, with no space to add appropriate fittings for the unit to operate from electricity.

It’s an L-shaped kitchen unit, with a Can hob comprising three gas rings in a row, set under smoked glass lids. All it lacks is spark ignition.

Marquis has had a hand in the cooking provisions, too, demanding the fitting of a grill/oven combination which, despite being set rather low, remains a plus. The cutlery drawer above is set far easier to hand and it – like the overhead lockers throughout – has a soft-close action. Kitchen cupboard space is just OK – there’s a single overhead locker, which is shelved, plus a large cupboard directly under the sink. There’s no space for a drainer, though.

Open shelving for spice jars completes the main kitchen storage, while across the corridor is a narrow but large fridge with freezer compartment, as well as a low-level drawer that’s ideal for keeping lots of bottles chilled and upright. The main detractions for this kitchen are the lack of worktop and the fact that there’s nowhere obvious to put a microwave (if you go for that sort of thing).

There’s actually loads of good storage in this Tessoro, despite the fresh water tank under the rear travel seat and the Truma Combi unit in the base of the settee opposite (although check out the easy access to the electrical fuses and trip switches here).

The rear single beds are also fixed, but a large cupboard in the offside rear bed base is the wardrobe, complemented by a trio of drawers in the base of the bed opposite. In addition, there is some open shelving in the overcab. There are also seven high-level lockers. And then there’s all that garage space.

The Tessoro 463 has two high-level fixed single beds, as well as the drop-down double over the lounge. The single beds will emerge as the favourites – although there is the facility to add extra mattress pieces to make them into a double. Despite their relatively high setting, access is easy – thanks to a substantial fold-out double step. Lighting is sufficient, with two individually switched reading lamps and a ceiling unit just forward of the Heki rooflight.

Step up from the kitchen area and there’s a shower cubicle to your left and a toilet room on the right. The cubicle is plastic lined and, despite being over the wheelarch, intrusion is minimal. The tray has two plugholes and a section of wooden duckboard. Access is via double doors, with sprung handles, and the shower head is on a riser bar for optimal adjustment. All that’s missing is some kind of holder for your shampoo and soap.

The toilet room has a full-height tambour door which, as well as saving space, also helps to open things out. Pull it shut and things are a little bit constricted, although space is given over to a fixed corner basin in grey plastic, below which sits a floor locker (which would benefit from a shelf), leaving just enough space for a toilet roll holder. The other storage provision here is a decent shelved locker that should swallow up your many bottles, toothpaste, washbag, etc. A sliding door also keeps the shower and toilet room immediately en suite to the rear bedroom.

Standard fittings include the solar panel, cab window blinds, reversing camera, 16in alloy wheels, cab air-conditioning, stereo system with USB connection and Bluetooth (although, surprisingly, no DAB)… the list does indeed go on, leaving little room for much in the way of options.