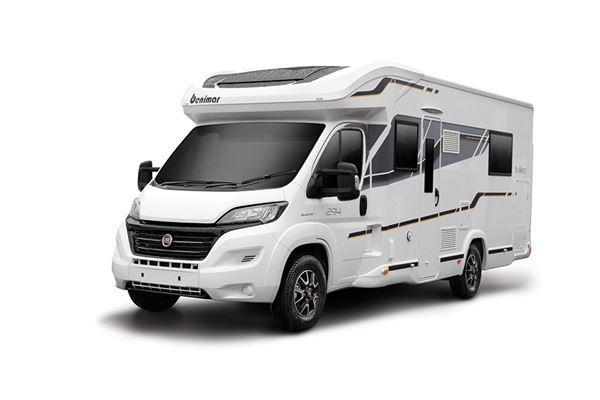 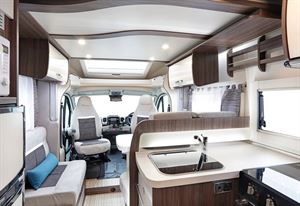 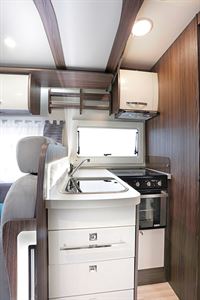 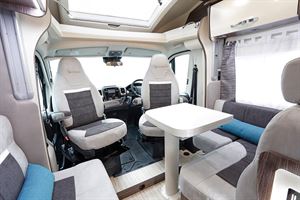 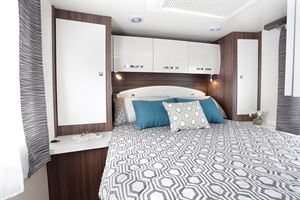 Benimar offers island bed layouts both in its Ford-based Tessoro range and the slightly more expensive Fiat-based Mileo. Both come in at under 7.4m long, with the Mileo costing a grand more than the Tessoro.

While base vehicle bias or driving characteristics may sway you one way or t’other, though, it’s as likely to be the bedroom design that is the key buying decision. After all, choosing an island bed layout is all about bedroom bliss. The Tessoro 494 (reviewed in the December 2017/January 2018 issue of What Motorhome) has a typical continental layout, but its sister model seen here is slightly more unusual.

Open the sliding, Japanese-style, panelled door between the galley and the fridge/freezer and instead of seeing the double bed in the centre of the ’van ahead of you, you’ll get an eyeful of… yourself! A full-height wall faces you, with a tall mirror hiding slim shelved storage. The bedroom itself is hidden behind here, with shower and loo facilities to either side.

There’s no doubt that this does create a more private bedroom (still with his and hers wardrobes at the head of the bed), but with a solid wall at the foot of the bed you’ll need to check its dimensions if you’re tall. Claimed figures are 1.90m by 1.39m. Of course, we’ve seen island bed floorplans like this from other brands but, usually, the washbasin takes up centre stage on the reverse side of the bedroom wall.

Here, it is instead over on the nearside, along with the cassette toilet (mounted on a plinth, so check for comfort). The basin itself is one of those ‘designer’ clear-bowl-on-a-plinth types, too. Then, on the other side of the vehicle, is the separate shower, while two more sliding panels close off all the ablutions from the bedroom beyond. The rest of the layout is pretty much as you’d expect – albeit with the habitation door on the UK side, which is rare amongst imported models.

Up front, there’s a big sunroof over the swivel cab seats, while an electric drop-down double bed is a standard feature above the lounge. The front bed is said to measure 1.90m by 1.40m, while the lounge – with an L-settee and side bench – is made more practical by the folding tabletop.

The kitchen area – in the typical L-shape, backing onto the lounge – is quite small but unusually well appointed. As well as the dual-fuel hob with extractor hood and combined oven/grill, there’s a fitted microwave mounted over the 145-litre fridge (which features automatic energy selection). But the microwave is just one aspect of the Benimar’s high-spec kit list.

This is one of those (too rare) motorhomes where you won’t have to examine a long list of options packs and extra cost items. Even the 150bhp motor is standard, though you’ll pay £1,900 more for an automatic. Also included in the basic price are cab air-conditioning, cruise control, ESP, automatic headlights and wipers, alloy wheels and LED daytime running lights.

Then, you’ll also find cab blinds, removable carpets, a TV aerial, 6kW heating, a solar panel, exterior shower and barbecue points and framed double-glazed windows are all standard, too. Even a security tracking system with a year’s subscription and 12 months’ insurance (subject to terms) are within the list price.

The only downside of so much spec is a limited payload remaining of just 260kg. As long as you have a C1 licence, though, that’s upgradeable. Going up to 410kg capacity is free of charge, while a whopping 1,120kg payload is possible with the 4.4-tonne Maxi chassis. 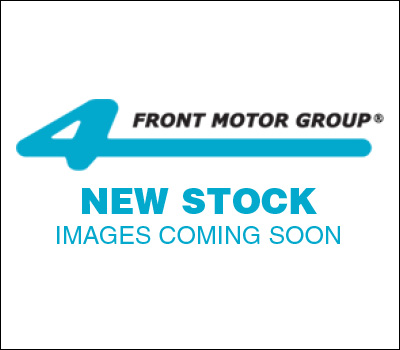