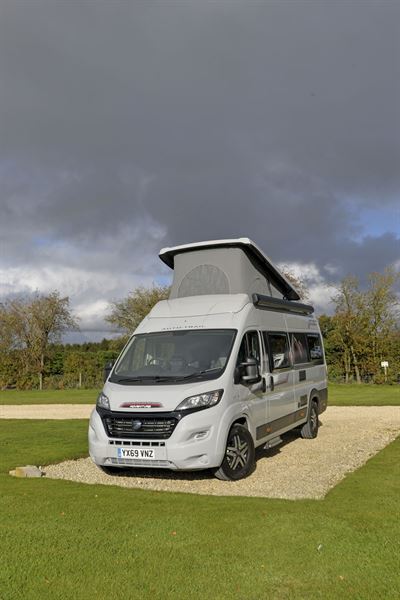 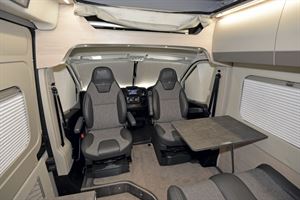 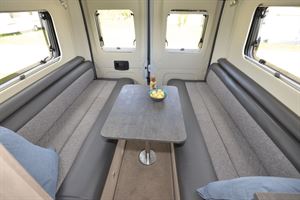 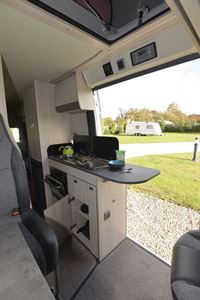 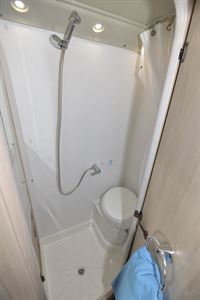 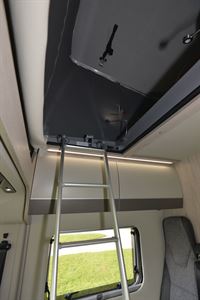 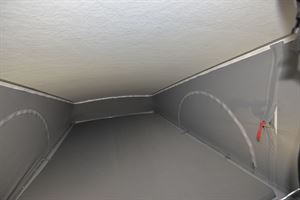 The new Auto-Trail Adventure range features the 5.99m 55 model at £58,295 and the 6.36m 65 version, which is £600 more. The layouts and specifications of the two models are virtually identical; the extra length of the 65 simply makes the rear bed 27cm wider and also increases locker space.

Importantly, unlike some Auto-Trails, both Adventures get the Media Pack as standard. This includes a touchscreen sat-nav with CD, DAB+ and Bluetooth, as well as a reversing camera, steering wheel controls and an Avtex 19.5in TV/DVD linked to a roof aerial.

Auto-Trail has also equipped the Adventure with two rear travel seats. They don’t transform into a bed, so are properly contoured and comfortable. And, when you arrive at a campsite and spin around the cab seats, they form the front lounge. In dining mode, there’s a handy wall-mounted table that simply flips up to cater for up to three people. If you do want to cater for four, then you’ll head to the twin side settee rear lounge instead and use its pole-in-the hole table. Even though the pop-top above deletes the lounge rooflight, you probably won’t miss it.

If you’re one of those people who cram the overhead lockers full of celebrity cookbooks and prepare a full roast on every campsite, then you may be disappointed by the galley. However, the Dometic twin-ring gas hob and Can oven and grill will be absolutely fine for most chefs.

There’s a reasonable swathe of worktop, with an additional flip-up section at the end if you need room for plating up. Then, completing the kitchen kit is a three-way 80-litre Dometic fridge. Appliances are fed via an underslung 25-litre LPG tank.

In the washroom the fold-down basin is solid and works well with its own decent-quality metal tap, although the separate showerhead is less convincing as it’s rather tightly mounted to the roof. A shower curtain stops the spray going over the loo. Also worth noting is that, as the bed above means there’s no roof vent, an opening window would have been useful for venting the washroom, but none is fitted. A fairly modest 70-litre tank (mounted underfloor) supplies the water.

We’ve saved the star feature of the Adventure until last as it’s at night-time that this camper really shines. For starters, there are no fiddly curtains in the cab – Remis blinds are fitted. Pull-down blinds seal off the rest of the windows and they’re all of decent quality.

The rear lounge settee bases simply pull together and the backrests form the centre section of the 1.85m by 1.62m double bed. It takes less than a minute to create the bed.

Where the Adventure really differs from conventional rivals is in having a rising roof. Unlike in a VW T6 where you can step up on the seats to clamber up to the roof bed, you definitely need the ladder here. After all, the pop-top is there for extra sleeping space only; full standing room is available without having to raise the roof. Ascend the ladder and you’ll marvel at the size of the upper bed. It’s an impressive 1.98m long and 1.40m wide, with the deep-foam mattress suspended on a sprung plastic base for maximum comfort.

Other makers, such as Hymer and Globecar, have offered high-top van conversions with a pop-top roof for several years now but the Adventure has a UK-style rear lounge rather than their fixed beds, making it a unique proposition, if one of slightly niche appeal.