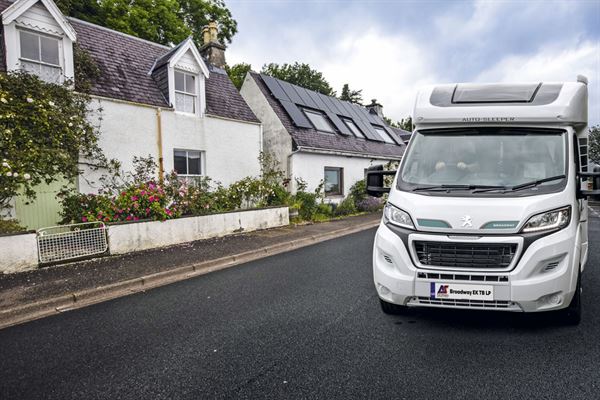 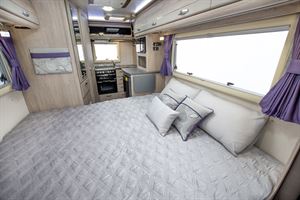 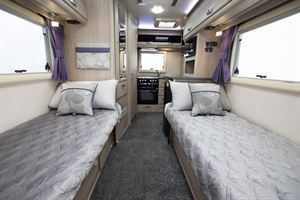 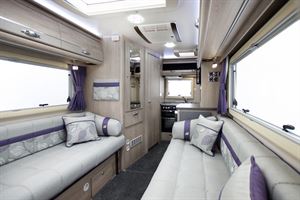 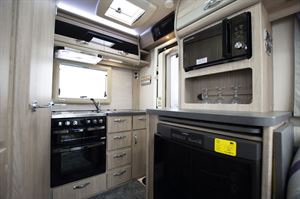 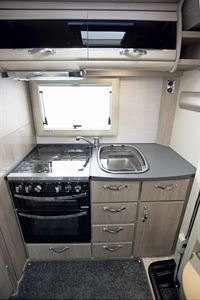 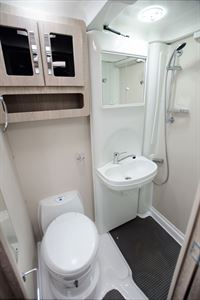 Auto-Sleepers is not a company to revamp its portfolio year in, year out. Instead, the models evolve, adding spec to classic designs such as this Broadway. So, for the 2020 season, the standard furniture changes to the lighter-coloured Santana (as seen here), though Valencia remains an option if you prefer. There’s an on-board mobile WiFi system, too, and a CRiS security chip, as well as new graphics and Dometic windows – not big changes but useful stuff.

More important are the changes to the Peugeot cab, which gets new engines to meet the latest Euro 6d-Temp emissions standard. Again, Auto-Sleepers is avoiding entry-level power units and going straight for the 165bhp motor, now a 2.2-litre with 370Nm of torque (up by 20Nm). Alternatively, if you want an automatic Broadway, you can swap to the Fiat chassis with its new nine-speed torque converter transmission and the latest 140bhp motor.

The rest – as summarised by EK meaning ‘end kitchen’, TB describing the lounge as ‘twin bench’, rather than the pullman dinette of the standard EK, and LP for ‘low-profile’ because this member of the Broadway clan lacks the overcab luton (and extra double bed) – is unchanged. This Broadway comes with a classically British motorhome layout, featuring long side-facing settees up front and a galley across the tail, while the washroom sits in the rear offside corner.

Looked at another way, it’s a stretched version of the Nuevo EK (6.32m long overall plays 5.75m), offering a longer lounge so that you can sleep lengthways (in a double or singles) without using the cab seats. The twin bed lengths quoted by Auto-Sleepers are 1.93m (nearside) and 1.86m (offside), while the alternative double is a whopping 2.10m by 1.93m, so you can choose to sleep across or along the motorhome.

The bodywork is in scratch-resistant GRP with platinum-coloured sides, while the base vehicle comes with the standard (higher) chassis. Spec includes a Sargent vehicle tracker (for which an annual subscription applies), a Metalarte habitation door with central locking and flyscreen, and, as part of the Premium Pack, an integrated touchscreen DAB radio with sat-nav and Bluetooth and a reversing camera with display replacing the rear view mirror.

The Premium Pack has become an essential Auto-Sleeper feature and also includes other items that you won’t want to forgo – alloy wheels, cab air-conditioning, cruise control, a Thule canopy awning and an 80W solar panel. Then there’s the Media Pack, which adds a Mecatronic 65cm dish and the Winter Pack of cab blinds, heated tanks, Combi upgrade and wheelarch insulation.

The rear kitchen area comes well appointed, with a full cooker featuring three gas rings, a mains hotplate and a separate oven and grill. Alongside that is a sink with glass cover and removable draining board. Then, forward of the habitation door, is the fridge (a compact, under-counter model), plus a microwave and a set of cut-glass wine glasses clipped into their own recess. There are additional flip-up and pull-out worktop sections here.

The lounge comes with a removable free-standing table and, with the cab seat swivelled, there could be room for eight people to sit and natter here. Armrests and scatter cushions are provided and there’s a large rooflight above, while a choice of upholstery styles and colours is available at no extra cost.

The corner washroom doesn’t have a separate shower but the wall onto which the white plastic basin is affixed swings through 90 degrees to create a showering space away from the cassette loo and without recourse to a curtain. Water tanks are underslung with capacities of 102 litres (fresh) and 71 litres (waste). It’s also worth noting that gas comes from a built-in 25-litre LPG tank for cheaper refills and less hassle on continental tours.