If you’re in the market for a large, rear lounge campervan, then this Auto-Explore seems competitively priced, generally well spec’d and, above all, very well finished. The lounge and kitchen are its strongest suits, the washroom its least successful area. 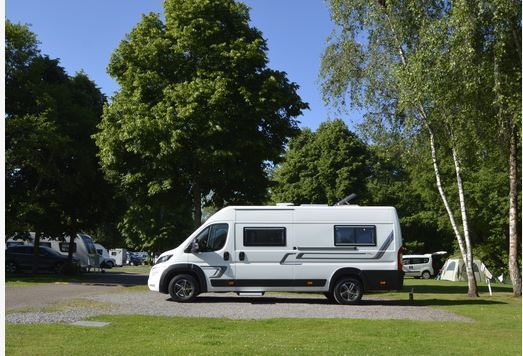 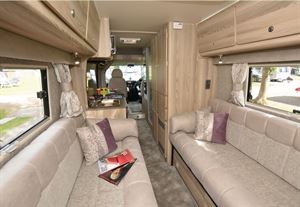 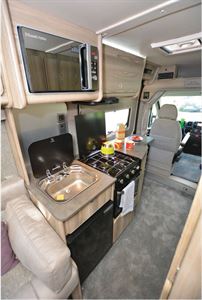 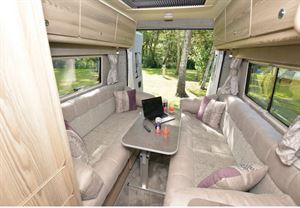 So, who is Auto-Explore? It’s a completely new brand of campervans that is exclusive to Webbs Motor Caravans, a dealership that has recently focused mainly on used vehicles. However, it will now plug the gaps on its Reading forecourt, caused by the well-publicised difficulties in obtaining stock, with vehicles from Auto-Explore. And it will also introduce this range at its previously touring caravans-only branch in Salisbury.

You’ll only find the Auto-Explore brand at Webbs, which, over the past year, has worked with a new start-up converter, Ibex Motorhomes, to develop a range of three models. Initial prototypes have been built on used panel vans, but the intention is to convert only brand-new, preregistered Peugeot Boxers. The plan is to build one a week, hopefully increasing to two per week next year, with future vehicles being subjected to National Small Series Type Approval. Other plans include having the vehicles’ heating and insulation tested in Truma’s cold chamber.

MMM obtained this Auto-Explore RL for test prior to its full-scale launch and you’ll be able to see the vehicles at Warners’ Malvern and Shepton Mallet shows, as well as Webbs’ premises. The range is simple, with layouts aping the most popular arrangements on sale in the UK.

Two are models on the long-wheelbase, six-metre Boxer – the RB (rear bed) with a half-dinette lounge and transverse double bed at the back, and the SB (side bench) with front lounge (including third travel seat), a rear offside galley and nearside corner washroom (similar to the old Autocruise Rhythm). The final model, tested here, is the RL (rear lounge) – on the extra-long (6.36m) Peugeot, it has long side settees in the stern and is the one with the most direct competition from other UK brands. As such, it has plenty to prove…

Auto-Explore campervans may be predominantly white (because of chassis availability), but Webbs will offer Peugeot’s metallic grey options, too. In any case, standard alloy wheels, some modern graphics, a painted front bumper, and upmarket framed double-glazed windows leave you in no doubt that this is a leisure vehicle.

Standard spec also includes a 100W solar panel and TV aerial on the roof, as well as an electric step with auto-retract for the sliding door. There’s no external shower or barbecue points and water tanks (66 litres fresh, 50 litres waste) are both underslung with the small, fiddly drain taps still seen on too many British-built campervans.

The intention is to keep the pricing simple, so the only option will be a pack comprising a 3.7m Fiamma roll-out awning and a bike rack. There are no choices of interior décor, unless you upgrade to leather.

All three models will be offered with the same £59,995 price tag (on a new base vehicle), which undercuts all of our listed rivals (albeit not by much in the case of the Auto-Trail V-Line).

Basis for all three Auto-Explores will be a Professional-spec Boxer, which comes with reversing sensors, cruise control, air-con, Bluetooth, DAB radio and sat-nav (just a 5in screen). Our test campervan lacked a passenger airbag, though.

On the road, this Peugeot drove much like any other – or, indeed, like a closely related Citroën Relay or Fiat Ducato. The firm ride, however, didn’t elicit much at all in the way of rattles from the living area, so the Auto-Explore betters some of its established competitors in this regard. The 2-litre BlueHDi 140bhp motor is pleasantly refined and should provide just enough performance, although this 13k-mile example suffered from an uncharacteristically notchy first gear; such issues shouldn’t affect campers built on brand-new Peugeots.

Much more important are the first impressions that the Auto-Explore makes on the inside. Here, the décor is warm and homely, the colour scheme restful and the attention to detail impressive, with plush soft carpets and extensive trimming of doors and walls. The furniture uses 15mm lightweight birch plywood for strength and stability and drawers feature tenon joints to reduce the chance of warping. It all looks like the product of a well-established converter, although perhaps not one of the bigger brands – cupboard doors use knock-on edging rather than edge-banding and flat doors sit proud of the lockers themselves.

In the case of the RL, the really important aspect is the bit that gives the model its title. Here, with its plump armrests and scatter cushions and settees with knee rolls, there is more than a hint of a popular rival, named after a town in Warwickshire…

Those comfortable sofas are each more than 6ft long, so there’s plenty of room to stretch out and, as usual with this design, it becomes even more appealing on a warm day with the rear doors wide open.

Reading lights (with USBs) in each corner combine with ambient lighting above the top lockers for plenty of illumination, while daylight floods in through a large, front-hinged MPK rooflight that I preferred to the usual Heki.

The table lives behind the driver’s seat (which had enough adjustment for me, but check this out if you’re very tall because of the washroom wall behind). It’s quite heavy but seems just the right size (950mm by 500mm) and is free-standing. Not only can you use it outside, but it’s utterly wobble-free.

Thoughtfully, the nearside lounge window is a slider, rather than top-hinged, to avoid a clash with the sliding door and, although no TV or bracket is fitted, there are 12V, 230V and aerial sockets on the wardrobe wall. Better still, the storage under the seats is easily accessible, with bed bases that lift on gas struts and drop-front doors. Also, on the offside, there’s a hatch to post external items, such as outdoor chairs or levelling wedges, in from outside. Indeed, the offside locker is completely unencumbered by vehicle services, while the nearside sofa hides the leisure battery (which is not boxed in), water pump and RCD with habitation fuses (still leaving some stowage space, if you’re careful how you pack).

Apart from the very inviting lounge, another appealing aspect of a layout of this ilk is the ease of bed-making – and the easy access to the kitchen and washroom when sleeping singly.

In fact, to make twin beds, all you have to do is remove the sofa backrests and all those armrest/scatter cushions – they make quite a pile in the cab!

The Peugeot cab is simply not used for anything else on site and you pull a full-length lined curtain to close it off at night; pity there isn’t a swivel passenger seat to enjoy an early cuppa while your partner is still dozing (it can be retro-fitted, says Webbs).

The rear doors’ fixed tinted glass windows also have curtains, while the double-glazed side windows in the lounge have both flat blinds (and flyscreens) and curtains.

With just one (high-density reflex foam) cushion for each bed, the singles offer a good night’s sleep. For once, they are identical in size, too, and, although the mattresses measure 1.87m long, the length from wall to wall is almost 1.97m.

If you prefer a double, then slatted bed bases with their own legs slide out from each side and just one of the sofa backrest cushions fits into the gap. This huge bed is actually square but it makes sense to sleep lengthways so that the ridges caused by the knee rolls are not so noticeable. I also liked the fact that there are no fixed sections of backrest cushion left on the walls with the beds made up, unlike in several rivals.

Webbs’ policy with the Auto-Explore is to offer a comprehensive standard spec and that is most obviously displayed in the kitchen. Here, you get not just the popular Thetford Triplex cooker with three gas rings and combined oven and grill, but also an extractor hood above and a Russell Hobbs 800W microwave, too.

It’s quite an expansive galley for a van conversion, with plenty of storage and a decent amount of worktop to the right of the hob, even before you deploy the folding extension on the forward end of the kitchen. However, the single mains socket here (on the wall behind the sink) seems poorly placed, as there’s nowhere for your kettle or toaster to go once both appliance lids have been raised.

Unusually, for this size of campervan, the fridge is a compressor-type, using 12V power only. I liked its switch-on-and-forget nature and the speed with which it got cold (despite outside temperatures in the mid-20s), and it needs no ugly external vents; however, those envisaging a lot of off-grid camping might want to fit a second leisure battery or upgrade to lithium.

The fridge’s 90-litre capacity is generous enough for a two-person campervan and there’s a range of cupboards – under the oven, a tall shelved unit alongside the cooker and a good-sized top locker. What’s missing is anywhere specifically for cutlery and utensils, although you could kit out one of the drawers under the wardrobe for this purpose. There are no drawers in the kitchen unit.

Opposite the galley, there are two super-sized soft-closing drawers under the wardrobe (ideal for underwear and other folded clothes). Then, the hanging space itself is extremely generous, too – not so much in its shirt-length drop from the rail (760mm), but its double-door width (820mm). At floor level, under here, are the gas compartment for one 6kg Calor cylinder and the gas/electric Combi boiler.

More storage is found in the large open shelf over the cab (don’t forget to duck if you’ve become used to a full-height walk through), and in various magazine pockets around the campervan, even on the back of the galley unit. There’s also a tall mirror and useful coat hooks facing you as you enter through the sliding door.

The washroom has a toilet roll holder and a toothbrush mug but no other storage at all; not even a towel ring or robe hook. This space actually works best as a shower, as there’s no horrid clingy curtain to deploy, it has sufficient room to move and an even flow of hot water is easy to achieve (although suds are not quite so simple to disperse as there’s just one outlet in the shower tray).

The washroom’s most unusual feature is a light linked to a motion sensor – great in the day, but possibly a bit of a shock at night!

The toilet is the ubiquitous Thetford swivel cassette but it’s mounted rather high for anyone who hasn’t been on the rack recently, while the tip-up basin folds down so close to your midriff that you might feel the need to immediately sign up to Weight Watchers.

This zone is, perhaps, the weakest in the Auto-Explore arsenal and, if you prefer to use your own facilities, you’ll want to check it out for yourselves.