If you think campervans have become too expensive, then this new modular concept from Auto Campers could offer a good saving, especially when based on a used panel van. However, more impressive than the pricing is the versatility on offer – massive load space, big beds, travel seats for up to seven, and different permutations for different needs. Just buy the bits you need and enjoy! 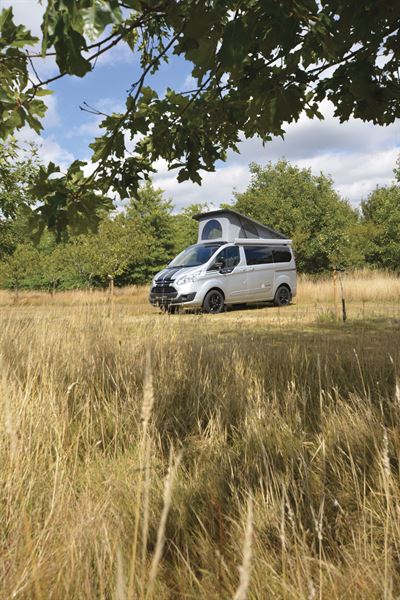 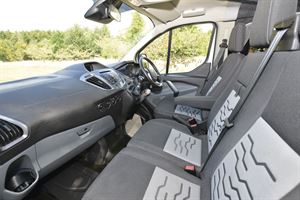 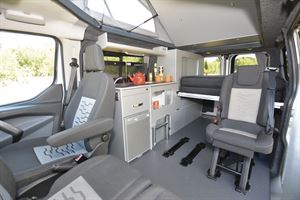 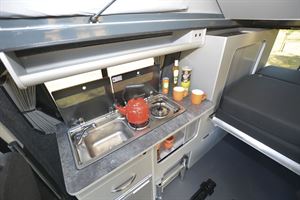 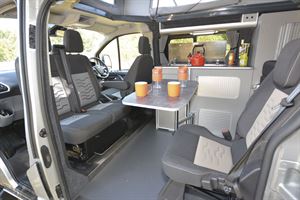 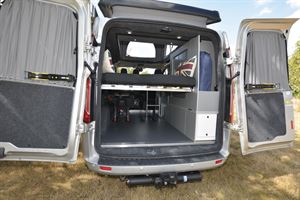 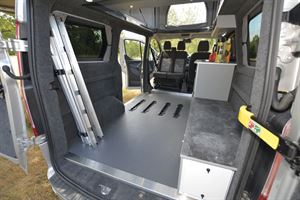 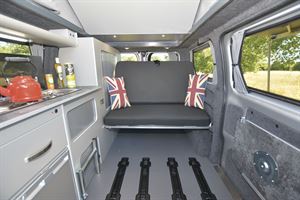 The VW camper market has been booming in the last few years, with the popularity of pop-top conversions rising quicker than the roofs themselves. But, alongside that growth has been an increase in prices to the point where £60k is seen as the norm for a new vehicle.

One way to keep costs down is to switch base vehicles and Auto Campers has long been an advocate of the Ford Transit Custom – hardly surprising as its sister company is van dealer, Roy Wood Transits. Even on the Ford, though, it was finding that prices were slipping away from the £40k mark towards £50k, thanks (in part) to three base vehicle price increases in the last 12 months.

Time, then, to think again and introduce the first (and only) Auto Campers model to be offered on a used base vehicle (usually supplied, although customers’ vehicles can be converted if they meet the right specification).

In order not to devalue the brand, it will only build the new Eco-line Series version of the Day Van on Tourneo people carriers or top-spec Limited panel vans with at least the 128bhp (130PS) engine, and high-mileage vehicles will not be considered.

Appropriate pre-owned vans can be sourced for £15-17k, it says, while conversion-only prices start at £13,000 for a Lo-line (with the standard van roof height). Alternatively, an all-new Eco-line on the latest, facelifted Transit Custom Limited starts at £36,000.

As with other Auto Campers models, the Eco-line is also available on the high-roof Transit Custom (referred to as the Hi-line) for an extra £2,000 or with a pop-top roof for an additional £3,500. There’s a long-wheelbase option, too, for £500 more (available on all three roof styles). But that’s just the beginning of the choices that a buyer will make...

It’s important to say, at the outset, that this is a more affordable Auto Campers vehicle, but not one in which quality has been sacrificed. Throughout, this is a conversion, which exudes sturdy, practical design. It eschews bling – bar the optional go-faster stripes up the bonnet of the test model – and feels built to last.

Most of the cost savings have been achieved by reducing the camper spec (but not the base vehicle – Ford trim levels don’t go higher than Limited). Luxuries like a solar panel (as seen on other Auto Campers) have been omitted and the elevating roof is a British design rather than the more expensive Reimo unit usually fitted. The essentials are included, though, and you can tailor the specification to suit your needs.

When based on a new Transit Custom, you get two individual cab seats without swivels (twin rotating seats add £840).

It is fitted with a sliding window behind the kitchen and a fixed window in the sliding door, but glazing aft of this costs extra, partly to appeal to commercial users as an N1 qualifying vehicle.

Inside, the vehicle – which comes as standard with a single sliding side door and rear barn doors (second slider and a tailgate are options) – is fully lined and insulated, with a composite floor (Styrofoam and plywood), and tough Altro vinyl and stainless-steel trims in the doorways.

There’s a leisure battery, blackout curtains and silver screens, mains hook-up, MCB, RCD and mains-to-12V charger, zoned LED lighting (including a stalk light serving the cab and roof bed, when fitted) and 12V, 230V and USB sockets. These power points are fitted at the forward end of the main (fixed) galley unit – one of the few aspects that is standard, however you spec your Eco-line.

The kitchen unit is, perhaps, the most conventional aspect of this camper. For a start, it’s a fixed unit that faces you as you open the sliding door. Cabinets are finished in matt grey and are laminated poplar wood.

The galley is fitted with a familiar Dometic combined two-burner hob and sink unit under split glass lids. Water is pumped from a pair of 12-litre containers at floor level towards the rear, in an area in which you’ll also find the Banner leisure battery and the (sealed and vented) gas locker.

Standard kit also includes a 47-litre Dometic front-loading compressor fridge – another very familiar campervan component. Above that is a deep drawer, while, alongside, a tambour door provides access to a capacious cupboard. Then, at floor level, another tambour opening reveals a locker for a toilet. There’s space here for the toilet roll and chemicals, too, while the Dometic 972 loo is an extra, at £100.

Then your choices start, in the rear offside corner. Standard spec here is just the ultra-low, seat-height unit, which contains the vehicle’s services (as already described). On top of this, you can add low-level storage units (£900), which continue the level of the kitchen right up to the back doors.

At 680mm by 390mm by 440mm high, the top-loading compartment here is huge in campervan terms and ideal for folded clothes, etc. It makes for a great bedside cabinet, too, and because there was glazing all round (some of it optional) on this demo model, it makes for a fabulous feeling of space inside the camper.

Of course, some may prefer the more traditional full-height corner unit, which costs slightly more (£1,100), but adds even more storage. The tall unit can also incorporate an open shelf inside the back doors for your folding outdoor chairs. Both additional units are fully removable.

Reflecting the fact that most secondhand vans will have a double passenger seat, Auto Campers is offering a swivel mechanism for this bench. It’s priced at £720 and is not just a standard rotating system, but is combined with a lowered seat, for both comfort and safety reasons. It turns more easily than similar seats in VWs and proved comfortable on site, despite its fixed-rake backrest.

In the rear, the Eco-line comes with two seat/bed configurations – the SB (suspended bed) as seen here or the RB (rock ’n’ roll bed), which has a more conventional seat/bed system and costs £1,000 more.

For travel, the SB version has floor sockets to fit a pair of Ford Tourneo individual rear seats – these are not included in the pricing but can be widely acquired secondhand for around £300 a set.

With the rear bed system removed you can even specify extra (third row) rear seat mountings and the Eco-line can then seat up to seven for travel. In camping mode, it can be a four/five-seatbelt vehicle (depending on whether a single or double cab passenger seat is fitted) or you could fit just one rear passenger seat, creating extra floor space.

For dining, the table is mounted on a swing-out bracket next to the fridge. This allows a wide variety of table positions, including alongside the galley for extra serving/preparing surface for the cook.

The addition of a swivel driver’s seat, though, would make for more comfortable dining. I liked the table stowage on the inside of the sliding door but part of me longed for the versatility of a free-standing table.

If you’ve got this far and started to think that this is a clever campervan with a mind-boggling array of permutations, then welcome to the Eco-line’s star feature – its suspended bed system.

The rear part of this looks pretty conventional, although the two rearmost mattress sections are actually supported by a pair of aluminium crossbars and a set of slats that unfurl across them. All of this can quickly and easily be removed for maximum – van-style – load carrying.

Even with the bed in place, there’s a large, uninterrupted area beneath for camping kit, surfboards, sports gear, etc, and tie-downs can be fitted to secure whatever load you plan to carry. This area has a width of 1.09m between the nearside wheelarch and the cabinets opposite.

Not enough room? Then the bed supports can be refitted at a higher level, increasing the load area height to 600mm – plenty for most dog crates, for example. The bed can still be slept in when raised, with the mattress now 760mm off the floor instead of 510mm.

In either high or low setting, the front section of the bed is supported by a specific leg fitted into the table bracket on the offside and a seatbelt-style strap (hence ’suspended bed’) on the nearside. The mattress feels utterly sturdy and can be equipped with a Duvalay mattress topper for the ultimate comfort (I slept like a baby!).

The standard Eco-line bed measures a decent 1.87m by 1.18m and a longer bed can be provided for taller customers. A wider bed is also an option, if you either remove the optional rear offside corner cabinets or, indeed, don’t buy them in the first place.

It’s then possible to have a bed that’s practically the full width of the camper (1.65m) at shoulder level, just narrowing towards the foot where the galley juts out. And, of course, the wide bed can be created in the high or low position.

And that’s not all. The bed can be turned into a chaise longue by tipping up the rearmost section of the bed and adding supports, or you can make it into a settee – although it must be pointed out that this is definitely not a travel seat!

Our test vehicle was based on a 66-plate Transit Custom with 45k miles recorded. As a Limited-spec van it came with goodies like metallic paint, alloy wheels, leather steering wheel, reversing sensors, etc, but most impressive was the way it still drove like a low-mileage vehicle. Only wear on the driver’s seat bolster and some minor paintwork issues (especially on the inside of the rear doors) pointed to its less leisurely previous life.

Of course, we’ve long been fans of this compact Ford van and most buyers will find it as appealing to drive as its VW T6 nemesis. Tall drivers will be pleased to note that adjustment of the seat is not compromised by the kitchen unit behind.

This pre-facelift model lacks the fancier fascia of the latest version (with its touchscreen multimedia display), but the awkward heater controls are the only real bugbear. You’ll live with those for the thousands you are saving.

Auto Campers advises against converting very late secondhand base vehicles as prices then are too close to new.

A new conversion – to this high standard – on a good condition pre-owned van could be a very tempting proposition, though, at around £35,000, especially compared with new conversion/used van offerings on the VW T6, which often suffer from very basic spec and low-powered engines when you’re looking at this price point.