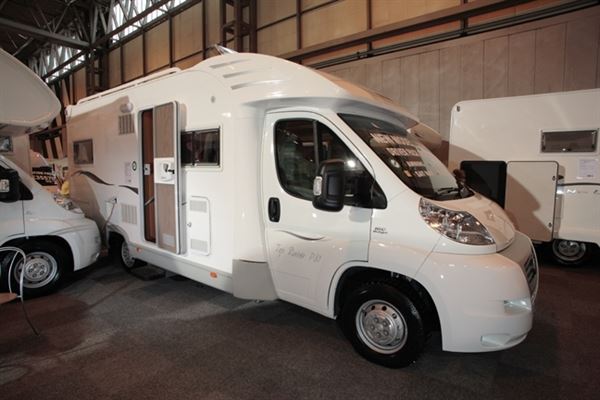 IF you were starting to despair that the relentless invasion of continental motorhomes was beginning to see off the traditional British motorhome, then fear not, for it appears that some imported brands are, in a bizarre twist, beginning to take a leaf out of our home-grown industry's book.

Take Mobilvetta's brand-new low-profile Top Driver P81 U, for instance. Where the standard P81 has a transverse rear double bed with the usual garage beneath, the new Anglicised P81 U sports a traditional low-level U-shaped lounge with a considerably smaller, but still useful, storage void beneath.

From the outside, the P81 U conversion looks the business, and blends almost seamlessly with the new Ducato base. The Marquis show model sported Fiat's potent new 160 Multijet engine, too, while the towering rear elevation is broken up by a lower panel finished in a contrasting grey, round tail lights and a (rather Heath Robinson-looking) high-level cap containing the an LED third brake light.

Compared to open-plan UK rivals such as the new Compass Calypso, though, the narrow corridor that leads into the P81's rear lounge feels a bit oppressive, thanks to the presence of the stack fridge/freezer on one side and the washroom on the other. Once you're there, you feel entirely remote from the rest of the motorhome, which isn't entirely in keeping with this sort of layout's usual sociable layout.

It's a bit tight for space in there, too, thanks to the huge fixed table, and while the double bed that emerges at night is a good size, the longitudinal settees aren't long enough to form a pair of singles.

Moving into the washroom, matters improve slightly. The island washbasin looks a little odd, but the shower compartment behind it is of a good size and well-lit.

The pullman-style dinette opposite the door has the added bonus of the forward-facing seats being true travel seats, but the seats themselves are firm to the point of being almost hard.

The kitchen sink is suitably enormous and the adjacent Cramer hob has three burners, but spark ignition is conspicuously absent, and it badly lacks worktop space, despite having a lift-out plastic drainer. It does, however, regain some ground by offering an extractor fan hood and better-than-average storage space. The AES 150-litre fridge/freezer is a welcome sight, too, and sits remote of the kitchen proper, with the large spark-ignition Smev oven/grill positioned overhead.