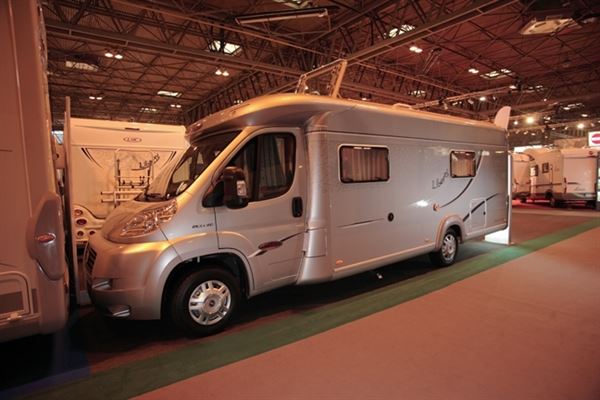 IT'S rare for any motorhome to polarise public opinion as much as LMC's remarkable new Liberty Finish 7100ti did at the NEC.

Anyone who saw it had to admit that, love it or hate it, you just can't ignore it.

Certainly, it's difficult to ignore that frankly belief-beggaring rear overhang.

Anyone thinking of taking one up a steep slope - on a cross-Channel ferry, for instance - would do well to take things very steadily indeed.

So why the super-long 24ft-plus body? The answer lies inside, where the half-dinette and compact kitchen up front play second fiddle to a pair of huge longitudinally-mounted single beds out back, each of which stretches the tape measure to a whopping 6ft 4in in length (and each of which is quite high-set off the floor, making them tricky to get to for those short in the leg).

And as if the beds weren't space-sapping enough, LMC has somehow managed to shoehorn in a full-width end washroom at the far rear, complete with a full-size separate shower compartment.

Does it work? Well, a steady stream of curious show-goers came and went as I gave the LMC an extensive once-over and most seemed to be of the opinion than the beds take up too much space for something that will only be used at night and that the lounge has suffered as a result.

It's true that the 7100ti's lounge is quite compact, but with the swivel cab seats taken into account, four adults can lounge about reasonably comfortably. It's worth pointing out, though, that the half-dinette's floor is quite high in relation to the rest of the motorhome, which might prove problematical for taller people.

The LMC's kitchen, on the other hand, is surprisingly good, extending as it does to a large (if rather low-set) Duplex oven/grill and an AES 150-litre stack fridge/freezer, while storage space is boosted by the provision of large metal veggie racks underneath the sink. Work surface provision is more than adequate.

And much as the end washroom guzzles even more body length, it's pretty good. There's not a lot of dressing/undressing space, but cupboard/shelf space is unprecedented, and the separate shower compartment is of a very good size.