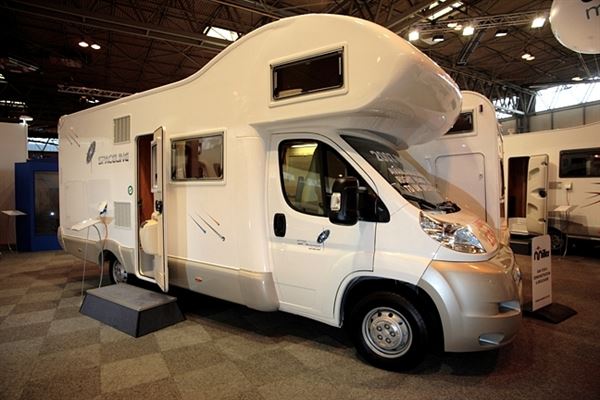 JOINT, whose motorhomes are imported from Spain to the UK by SEA UK, have rationalised their previously three-strong range into just two models - the Z-Series and the Spaceline - for 2007.

The SPL 325 tested here represents the entry-level model in the posher Spaceline range.

In bald layout terms, this means an end washroom, complete with separate shower compartment, with the ever-popular European provision of permanent stacked bunks mounted longitudinally in the far nearside corner. A half-dinette is sited up front, with an inward-facing settee opposite and an L-shaped kitchen in the middle of the 'van.

And I have to say that for the money - £36,000 as near as makes no difference - this is an extremely well thought-through motorhome. The end washroom, in particular, impresses with its good sized shower cubicle's handy moulded-in seat (although the missing light seems a bit penny-pinching at this sort of price level). It also has a decent amount of room around the toilet, while the bunks have the added versatility of converting into a small side garage with the lower window/wall assembly opened out and the lower bunk folded up. You could certainly fit a couple of bicycles in there.

Amidships, the L-shaped kitchen breaks no real new ground, but the provision of a pair of proper wooden shelves behind the (enormous) round sink is certainly welcome, as is the sight of a handy overspill drain on the non-piezo three-burner hob. More than ample work surfaces are a bonus too.

This area is made to feel even more separate from the rest of the conversion by using cool-looking white/blue LED lights, and not the warmer halogens used elsewhere in the vehicle.

Up front, the half dinette lounge with its attendant, if rather small, offside settee, is made all the more family-friendly by dint of the fact that each of the cab seats swivels to face rearwards. The aforementioned settee is served by a good-sized window and a powerful striplight, too, making this whole area feel particularly bright and welcoming.

The luton bedroom is slightly less impressive, in that its reading lights are paired close together, thereby making the bedroom a gloomier affair for the inner occupant of the bed, and the pointless nearside window makes sitting up in bed uncomfortable.

On the plus side, the bed base slides fore/aft to open up greater cab headroom when on the move or during the day, and the bed itself is of a good size.